Encyclopedia
Safra Square is Jerusalem's city hall
City hall
In local government, a city hall, town hall or a municipal building or civic centre, is the chief administrative building of a city...
public
Public
In public relations and communication science, publics are groups of individuals, and the public is the totality of such groupings. This is a different concept to the sociological concept of the Öffentlichkeit or public sphere. The concept of a public has also been defined in political science,...
square
Town square
A town square is an open public space commonly found in the heart of a traditional town used for community gatherings. Other names for town square are civic center, city square, urban square, market square, public square, and town green.Most town squares are hardscapes suitable for open markets,...
named after Jacob
Jacob Safra
Jacqui Eli Safra is a Swiss investor, descendant of the Lebanon-Swiss Jewish Safra banking family. Some of his investments include Encyclopædia Britannica, Merriam-Webster, and Spring Mountain Vineyards, a large wine-growing estate located in Saint Helena, California. He is the nephew of Edmond...
and Esther Safra, parents of Edmond J. Safra
Edmond Safra
Edmond J. Safra was a Jewish Brazilian-naturalized, Lebanese banker who continued the family tradition of banking in Lebanon, Brazil and Switzerland. He married Lily Watkins. He died in a fire that attracted wide media interest and was judicially determined to be due to arson.-Life of Edmond...
, a Jewish philanthropist who contributed generously to the renovation of downtown Jerusalem.

Kikar Safra, as it is known in Hebrew, is built on a triangular
Triangle
A triangle is one of the basic shapes of geometry: a polygon with three corners or vertices and three sides or edges which are line segments. A triangle with vertices A, B, and C is denoted ....
-shaped plot near the eastern end of Jaffa Road
Jaffa Road
Jaffa Road is one of the longest and oldest streets in Jerusalem. It crosses the city from east to west, from the Old City walls to downtown Jerusalem, the western portal of Jerusalem and the Jerusalem-Tel Aviv highway. It is lined with shops, businesses and restaurants...
, bounded on the east by Shivtei Yisrael ("Tribes of Israel") street and forming a triangular intersection across from Tzahal Square and the walls of Jerusalem's Old City. The Russian Compound lies to the north. Some of the historic buildings of the Russian Compound have been restored and incorporated into the municipal complex. The Compound's historic gate was moved to the north of its original location.

Jerusalem's city hall, both the new complex and the former building, is close to the former 1949 armistice line
Green Line (Israel)
Green Line refers to the demarcation lines set out in the 1949 Armistice Agreements between Israel and its neighbours after the 1948 Arab-Israeli War...
that divided Jerusalem between Israeli and Jordanian control
Rule of the West Bank and East Jerusalem by Jordan
The West Bank and East Jerusalem were occupied by Jordan for a period of nearly two decades starting from the 1948 Arab-Israeli War. In 1950, the British extended formal recognition to the union between the Hashemite Kingdom and of that part of Palestine under Jordanian occupation and control -...
until 1967. Its location across from the Old City symbolizes the efforts of the municipal government to serve all residents of Jerusalem, east and west.

The original Jerusalem Municipality complex was built by the British in the 1930s, during the British Mandatory period. As the city grew along with the need to provide more modern and diverse services to an expanding and equally diverse population, the city government's offices expanded as well, and were spread throughout the city. The decentralized location of the municipal government decreased its efficiency, and it was decided to create a single building to house Jerusalem's local government. After lengthy deliberations, the current location was selected, despite the challenge of preserving the large number of historic and culturally significant 19th century buildings.

The Canadian
Canada
Canada is a North American country consisting of ten provinces and three territories. Located in the northern part of the continent, it extends from the Atlantic Ocean in the east to the Pacific Ocean in the west, and northward into the Arctic Ocean...
Jewish architect Jack Diamond
Jack Diamond (architect)
A.J. "Jack" Diamond, OC, O.Ont is a Canadian architect.Born in Piet Retief, South Africa, he received a Bachelor of Architecture degree from the University of Cape Town in 1956. He received a Master of Arts degree in politics, philosophy and economics from Oxford University in 1958...
and the Israel
Israel
The State of Israel is a parliamentary republic located in the Middle East, along the eastern shore of the Mediterranean Sea...
i architectural firm of Kolker, Kolker, and Epstein were selected to design a project consisting of 3 new buildings to be integrated with an existing 10 buildings and form a cohesive, unified site of 13 buildings. The 10 existing buildings would be preserved and rehabilitated in order to retain a sense of the historic character of the city. The plan for "Jerusalem City Hall" was completed, and its cornerstone
Cornerstone
The cornerstone concept is derived from the first stone set in the construction of a masonry foundation, important since all other stones will be set in reference to this stone, thus determining the position of the entire structure.Over time a cornerstone became a ceremonial masonry stone, or...
laid in 1988. In 1993 the project was completed and the offices opened for business. 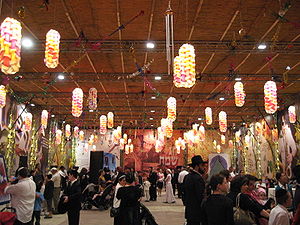 At the entrance of the complex is Daniel public garden named for Jerusalem mayor Daniel Auster
Daniel Auster
right|thumb|Daniel AusterDaniel Auster was Mayor of Jerusalem in the final years of the British Mandate of Palestine, the first Jewish mayor of the city, and the first mayor of Jerusalem after Israeli independence.-Biography:...
. The garden contains several works of art: a sculpture based on a large, working Archimedes screw that carries water up from a small pool, "Modern Head", a sculpture by Roy Lichtenstein
Roy Lichtenstein
Roy Lichtenstein was a prominent American pop artist. During the 1960s his paintings were exhibited at the Leo Castelli Gallery in New York City and along with Andy Warhol, Jasper Johns, James Rosenquist and others he became a leading figure in the new art movement...
donated in memory of assassinated prime minister Yitzhak Rabin
Yitzhak Rabin
' was an Israeli politician, statesman and general. He was the fifth Prime Minister of Israel, serving two terms in office, 1974–77 and 1992 until his assassination in 1995....
, and "The Binding of Isaac" by Jerusalem sculptor Avraham Ofek
Avraham Ofek
Avraham Ofek was an Israeli sculptor, muralist, painter and printmaker. Born in Bourgaz, Bulgaria, he immigrated to Israel in 1949, where he lived in Ein Hamifratz, a kibbutz near Haifa...
. The steps leading up to the complex from Jaffa Road
Jaffa Road
Jaffa Road is one of the longest and oldest streets in Jerusalem. It crosses the city from east to west, from the Old City walls to downtown Jerusalem, the western portal of Jerusalem and the Jerusalem-Tel Aviv highway. It is lined with shops, businesses and restaurants...
are lined with 48 palm trees, hence the name Palm Plaza (Hebrew: רחבת דקלים). Several statues of lions, the symbol of Jerusalem, also adorn the square.

On the Safra Square—next to the Jerusalem town house—the exhibition of the United Buddy Bears
United Buddy Bears
Buddy Bears are a series of painted, life-size fibreglass bear sculptures originally developed in Berlin, Germany. The first Buddy Bear was created by the German businesspeople Klaus and Eva Herlitz, in cooperation with the sculptor Roman Strobl in 2001....
was shown for the first time in Israel. The exhibition consisted of 138 respectively 2 m high bear sculptures, each of them designed by a different artist. This international art project was opened by the mayor and he was impressed that the bears of Iran and Iraq and Israel stood peacefully next to each other "hand in hand".
The source of this article is wikipedia, the free encyclopedia.  The text of this article is licensed under the GFDL.