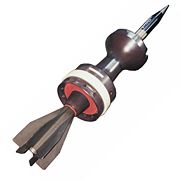 A sabot is a device used in a firearm
Firearm
A firearm is a weapon that launches one, or many, projectile at high velocity through confined burning of a propellant. This subsonic burning process is technically known as deflagration, as opposed to supersonic combustion known as a detonation. In older firearms, the propellant was typically...
or cannon
Cannon
A cannon is any piece of artillery that uses gunpowder or other usually explosive-based propellents to launch a projectile. Cannon vary in caliber, range, mobility, rate of fire, angle of fire, and firepower; different forms of cannon combine and balance these attributes in varying degrees,...
to fire a projectile
Projectile
A projectile is any object projected into space by the exertion of a force. Although a thrown baseball is technically a projectile too, the term more commonly refers to a weapon....
, such as a bullet
Bullet
A bullet is a projectile propelled by a firearm, sling, or air gun. Bullets do not normally contain explosives, but damage the intended target by impact and penetration...
, that is smaller than the bore
Caliber
In guns including firearms, caliber or calibre is the approximate internal diameter of the barrel in relation to the diameter of the projectile used in it....
diameter, or which must be held in a precise position. The term is also applied to a battery stub case, a device used similarly to make a small electrical battery
Battery (electricity)
An electrical battery is one or more electrochemical cells that convert stored chemical energy into electrical energy. Since the invention of the first battery in 1800 by Alessandro Volta and especially since the technically improved Daniell cell in 1836, batteries have become a common power...
usable in a device designed to employ a larger battery; see list of battery sizes. The name "sabot" comes from a French
French language
French is a Romance language spoken as a first language in France, the Romandy region in Switzerland, Wallonia and Brussels in Belgium, Monaco, the regions of Quebec and Acadia in Canada, and by various communities elsewhere. Second-language speakers of French are distributed throughout many parts...
word for wooden shoes traditionally worn in some European countries, also called clogs
Clog (shoe)
A clog is a type of footwear made in part or completely from wood.The Oxford English Dictionary defines a clog as a "thick piece of wood", and later as a "wooden soled overshoe" and a "shoe with a thick wooden sole"....
.

Since a strong seal is needed to trap propellant
Propellant
A propellant is a material that produces pressurized gas that:* can be directed through a nozzle, thereby producing thrust ;...
gases behind the projectile, and keep the projectile centered in the barrel, something is needed to fill the gap between projectile and barrel, which is the role of the sabot. Firing a small size projectile wrapped in a sabot raises the muzzle velocity of the projectile. Made of some lightweight material (usually plastic in smallbore guns, and aluminium
Aluminium
Aluminium or aluminum is a silvery white member of the boron group of chemical elements. It has the symbol Al, and its atomic number is 13. It is not soluble in water under normal circumstances....
- and, in earlier times, wood or papier-mâché
Papier-mâché
Papier-mâché , alternatively, paper-mache, is a composite material consisting of paper pieces or pulp, sometimes reinforced with textiles, bound with an adhesive, such as glue, starch, or wallpaper paste....
- in cannons), the sabot usually consists of several pieces held in place by the cartridge or a loose connection. When the projectile is fired, the sabot blocks the gas, and carries the projectile down the barrel. When the sabot reaches the end of the barrel, the shock of hitting still air pulls the parts of the sabot away from the projectile, allowing the projectile to continue in flight.

Sabot-type shotgun slugs were marketed in the U.S. starting in about 1985. When used with a rifled slug barrel
Slug barrel
A slug barrel is a barrel for a shotgun that is designed primarily to fire slugs.-Origins:When slugs are fired in a standard, choked barrel, the slug is deformed by the choke as it exits. The degree of deformation is most acute with fuller chokes, which were among the most widely used in stock...
, they offer vastly improved accuracy compared to traditional shotgun slugs. They are now legal for hunting
Hunting
Hunting is the practice of pursuing any living thing, usually wildlife, for food, recreation, or trade. In present-day use, the term refers to lawful hunting, as distinguished from poaching, which is the killing, trapping or capture of the hunted species contrary to applicable law...
in most states. 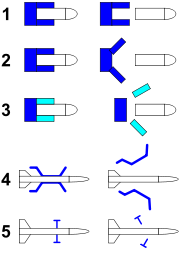 A cup sabot merely supports the base and rear end of a projectile. When the sabot and projectile exit the muzzle of the gun, air pressure on the sabot forces the sabot to release the projectile.

The base sabot has better and cleaner sabot/projectile separation than cup or expanding cup sabots, but is more expensive since more pieces are involved.

A spindle sabot uses a set (usually two) of matched rings which have a center section in contact with a long projectile, front sections which center that projectile in the barrel, and a rear section which both centers the projectile and seals propellant gases.

Spindle sabots are the standard western type armor-piercing ammunition type. Two and three piece spindle type sabots are shown in the illustrations at the right of this paragraph.

Shotgun slug
Shotgun slug
A shotgun slug is a heavy lead projectile, that may have pre-cut rifling, intended for use in a shotgun and often used for hunting large game. The first effective shotgun slug was introduced by Wilhelm Brenneke in 1898, and his design remains in use today...
s often use a cast plastic
Plastic
A plastic material is any of a wide range of synthetic or semi-synthetic organic solids used in the manufacture of industrial products. Plastics are typically polymers of high molecular mass, and may contain other substances to improve performance and/or reduce production costs...
sabot similar to the spindle sabot. Shotgun sabots in general extend the full length of the projectile and are designed to be used in rifled barrels.

A ring sabot uses the rear fins on a long projectile to help center the projectile, and the multi-piece sabot forms only a single thin ring around the projectile near the front, sealing gases from escaping past it and centering the front of the projectile.

Because the rear fins have to have the same diameter as the gun bore, they typically are larger than is optimum for flight performance.