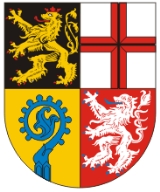 Encyclopedia
Saarpfalz is a Kreis (district
District
Districts are a type of administrative division, in some countries managed by a local government. They vary greatly in size, spanning entire regions or counties, several municipalities, or subdivisions of municipalities.-Austria:...
) in the south-east of the Saarland
Saarland
Saarland is one of the sixteen states of Germany. The capital is Saarbrücken. It has an area of 2570 km² and 1,045,000 inhabitants. In both area and population, it is the smallest state in Germany other than the city-states...
, Germany
Germany
Germany , officially the Federal Republic of Germany , is a federal parliamentary republic in Europe. The country consists of 16 states while the capital and largest city is Berlin. Germany covers an area of 357,021 km2 and has a largely temperate seasonal climate...
. Neighboring districts are (from west clockwise) Saarbrücken
Saarbrücken (district)
The Regionalverband Saarbrücken is a Kommunalverband besonderer Art, an integration of a district and a district-free town. It is located in the south of the Saarland, Germany...
, Neunkirchen
Neunkirchen (German district)
Neunkirchen is a Kreis in the middle of the Saarland, Germany. Neighboring districts are Sankt Wendel, Kusel, Saarpfalz, Saarbrücken, and Saarlouis.-History:...
, Kusel
Kusel (district)
Kusel is a district in the south of Rhineland-Palatinate, Germany. Neighboring districts are Birkenfeld, Bad Kreuznach, Donnersbergkreis, Kaiserslautern, Saarpfalz and Sankt Wendel .-History:The district of Kusel was created at the beginning of the 19th century...
, Kaiserslautern
Kaiserslautern (district)
Kaiserslautern is a district in the south of Rhineland-Palatinate, Germany. Neighboring districts are Kusel, Saarpfalz-Kreis, Donnersbergkreis, Bad Dürkheim and Südwestpfalz. The city of Kaiserslautern is almost fully enclosed by, but not belonging to the district.-History:The district of...
, Südwestpfalz
Südwestpfalz
Südwestpfalz is a district in the south of Rhineland-Palatinate, Germany. Neighboring districts are Saarpfalz, the district-free city Zweibrücken, the districts Kaiserslautern and Bad Dürkheim, the district-free city Landau , Südliche Weinstraße, and the French département Bas-Rhin...
, district-free Zweibrücken
Zweibrücken
Zweibrücken is a city in Rhineland-Palatinate, Germany, on the Schwarzbach river.- Name :Zweibrücken appears in Latin texts as Geminus Pons and Bipontum, in French texts as Deux-Ponts. The name derives from Middle High German Zweinbrücken...
, and the French
France
The French Republic , The French Republic , The French Republic , (commonly known as France , is a unitary semi-presidential republic in Western Europe with several overseas territories and islands located on other continents and in the Indian, Pacific, and Atlantic oceans. Metropolitan France...
département Moselle
Moselle
Moselle is a department in the east of France named after the river Moselle.- History :Moselle is one of the original 83 departments created during the French Revolution on March 4, 1790...
.

After the Treaty of Versailles
Treaty of Versailles
The Treaty of Versailles was one of the peace treaties at the end of World War I. It ended the state of war between Germany and the Allied Powers. It was signed on 28 June 1919, exactly five years after the assassination of Archduke Franz Ferdinand. The other Central Powers on the German side of...
, the Saar basin was placed under the administration of the League of Nations
League of Nations
The League of Nations was an intergovernmental organization founded as a result of the Paris Peace Conference that ended the First World War. It was the first permanent international organization whose principal mission was to maintain world peace...
for 15 years. The Palatinate area, then part of Bavaria
Bavaria
Bavaria, formally the Free State of Bavaria is a state of Germany, located in the southeast of Germany. With an area of , it is the largest state by area, forming almost 20% of the total land area of Germany...
, was therefore split in two parts. The part which went into the Saar became commonly known as Saarpfalz, and was administrated by the two Bezirksamt St. Ingbert and Homburg. The Saarpfalz district was created in 1974 when the St. Ingbert and Homburg districts were merged. Since 1997 the district has had a partnership with Henrico County, Virginia
Henrico County, Virginia
Henrico is a county located in the Commonwealth of Virginia, a state of the United States. As of 2010, Henrico was home to 306,935 people. It is located in the Richmond-Petersburg region and is a portion of the Richmond Metropolitan Statistical Area...
.