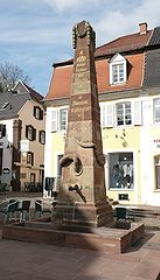 Encyclopedia
Blieskastel is a municipality in the Saarpfalz
Saarpfalz
Saarpfalz is a Kreis in the south-east of the Saarland, Germany. Neighboring districts are Saarbrücken, Neunkirchen, Kusel, Kaiserslautern, Südwestpfalz, district-free Zweibrücken, and the French département Moselle.-History:After the Treaty of Versailles, the Saar basin was placed under the...
district, in Saarland
Saarland
Saarland is one of the sixteen states of Germany. The capital is Saarbrücken. It has an area of 2570 km² and 1,045,000 inhabitants. In both area and population, it is the smallest state in Germany other than the city-states...
, Germany
Germany
Germany , officially the Federal Republic of Germany , is a federal parliamentary republic in Europe. The country consists of 16 states while the capital and largest city is Berlin. Germany covers an area of 357,021 km2 and has a largely temperate seasonal climate...
. It is situated on the river Blies
Blies
The Blies is a right tributary of the Saar River in south-western Germany and north-eastern France . The Blies flows from three springs in the Hunsrück mountains near Selbach, Germany. It is approximately 100 km long, ending in the French city of Sarreguemines...
, approximately 8 km west of Zweibrücken
Zweibrücken
Zweibrücken is a city in Rhineland-Palatinate, Germany, on the Schwarzbach river.- Name :Zweibrücken appears in Latin texts as Geminus Pons and Bipontum, in French texts as Deux-Ponts. The name derives from Middle High German Zweinbrücken...
, and 20 km east of Saarbrücken
Saarbrücken
Saarbrücken is the capital of the state of Saarland in Germany. The city is situated at the heart of a metropolitan area that borders on the west on Dillingen and to the north-east on Neunkirchen, where most of the people of the Saarland live....
.

Blieskastel is twinned
Town twinning
Twin towns and sister cities are two of many terms used to describe the cooperative agreements between towns, cities, and even counties in geographically and politically distinct areas to promote cultural and commercial ties.- Terminology :...
with: Le Creusot
Le Creusot
Le Creusot is a commune in the Saône-et-Loire department in the region of Bourgogne in eastern France.The inhabitants are known as Creusotins. Formerly a mining town, its economy is now dominated by metallurgical companies such as ArcelorMittal, Schneider Electric, and Alstom.Since the 1990s, the...
, France
France
The French Republic , The French Republic , The French Republic , (commonly known as France , is a unitary semi-presidential republic in Western Europe with several overseas territories and islands located on other continents and in the Indian, Pacific, and Atlantic oceans. Metropolitan France...
, since 1989
The source of this article is wikipedia, the free encyclopedia.  The text of this article is licensed under the GFDL.