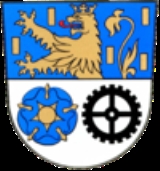 Encyclopedia
Neunkirchen is a Kreis in the middle of the Saarland
Saarland
Saarland is one of the sixteen states of Germany. The capital is Saarbrücken. It has an area of 2570 km² and 1,045,000 inhabitants. In both area and population, it is the smallest state in Germany other than the city-states...
, Germany
Germany
Germany , officially the Federal Republic of Germany , is a federal parliamentary republic in Europe. The country consists of 16 states while the capital and largest city is Berlin. Germany covers an area of 357,021 km2 and has a largely temperate seasonal climate...
. Neighboring districts are Sankt Wendel
Sankt Wendel (district)
Sankt Wendel is a Kreis in the north of the Saarland, Germany. Neighboring districts are Trier-Saarburg, Birkenfeld, Kusel, Neunkirchen, Saarlouis, and Merzig-Wadern.-History:...
, Kusel
Kusel (district)
Kusel is a district in the south of Rhineland-Palatinate, Germany. Neighboring districts are Birkenfeld, Bad Kreuznach, Donnersbergkreis, Kaiserslautern, Saarpfalz and Sankt Wendel .-History:The district of Kusel was created at the beginning of the 19th century...
, Saarpfalz, Saarbrücken
Saarbrücken (district)
The Regionalverband Saarbrücken is a Kommunalverband besonderer Art, an integration of a district and a district-free town. It is located in the south of the Saarland, Germany...
, and Saarlouis
Saarlouis (district)
Saarlouis is a Kreis in the middle of the Saarland, Germany. Neighboring districts are Merzig-Wadern, Sankt Wendel, Neunkirchen, Saarbrücken, and the French département Moselle.-History:...
.

In 1814, the district Ottweiler was created; however, its history can be traced back to 1545 when it was created as Herrschaft Ottweiler, later Amt and Oberamt Ottweiler, and during the Napoleonic times as Kanton Ottweiler. Two years after its creation, it was reorganized in 1816 by order of the Congress of Vienna
Congress of Vienna
The Congress of Vienna was a conference of ambassadors of European states chaired by Klemens Wenzel von Metternich, and held in Vienna from September, 1814 to June, 1815. The objective of the Congress was to settle the many issues arising from the French Revolutionary Wars, the Napoleonic Wars,...
. In 1866, an attempt to move the district capital to Neunkirchen failed. In 1974, the districts were reorganized, the biggest change however was the change of the capital and thus the name to Neunkirchen. Some parts of the administration remained in Ottweiler.

The entire district is located in the industrial area, which is centered in Saarbrücken
Saarbrücken
Saarbrücken is the capital of the state of Saarland in Germany. The city is situated at the heart of a metropolitan area that borders on the west on Dillingen and to the north-east on Neunkirchen, where most of the people of the Saarland live....
. It is situated on either bank of the Blies
Blies
The Blies is a right tributary of the Saar River in south-western Germany and north-eastern France . The Blies flows from three springs in the Hunsrück mountains near Selbach, Germany. It is approximately 100 km long, ending in the French city of Sarreguemines...
, a major tributary of the Saar River.