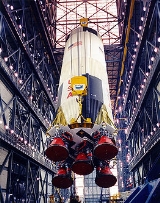 
The S-IC was the first stage
Multistage rocket
A multistage rocket is a rocket that usestwo or more stages, each of which contains its own engines and propellant. A tandem or serial stage is mounted on top of another stage; a parallel stage is attached alongside another stage. The result is effectively two or more rockets stacked on top of or...
of the Saturn V
Saturn V
The Saturn V was an American human-rated expendable rocket used by NASA's Apollo and Skylab programs from 1967 until 1973. A multistage liquid-fueled launch vehicle, NASA launched 13 Saturn Vs from the Kennedy Space Center, Florida with no loss of crew or payload...
rocket. The S-IC first stage was built by The Boeing
Boeing
The Boeing Company is an American multinational aerospace and defense corporation, founded in 1916 by William E. Boeing in Seattle, Washington. Boeing has expanded over the years, merging with McDonnell Douglas in 1997. Boeing Corporate headquarters has been in Chicago, Illinois since 2001...
Company. Like the first stages of most rocket
Rocket
A rocket is a missile, spacecraft, aircraft or other vehicle which obtains thrust from a rocket engine. In all rockets, the exhaust is formed entirely from propellants carried within the rocket before use. Rocket engines work by action and reaction...
s, most of its mass of over two thousand metric tonnes at launch was propellant, in this case RP-1
RP-1
RP-1 is a highly refined form of kerosene outwardly similar to jet fuel, used as a rocket fuel. Although having a lower specific impulse than liquid hydrogen , RP-1 is cheaper, can be stored at room temperature, is far less of an explosive hazard and is far denser...
rocket fuel and liquid oxygen
Liquid oxygen
Liquid oxygen — abbreviated LOx, LOX or Lox in the aerospace, submarine and gas industries — is one of the physical forms of elemental oxygen.-Physical properties:...
(LOX) oxidizer. It was 42 meters tall and 10 meters in diameter, and provided 33,000 kN of thrust to get the rocket through the first 61 kilometers of ascent. Of the five F-1 engines
F-1 (rocket engine)
The F-1 is a rocket engine developed by Rocketdyne and used in the Saturn V. Five F-1 engines were used in the S-IC first stage of each Saturn V, which served as the main launch vehicle in the Apollo program. The F-1 is still the most powerful single-chamber liquid-fueled rocket engine ever...
, one was fixed in the center, while the four on the outer ring could be hydraulically turned (gimbal
Gimbal
A gimbal is a pivoted support that allows the rotation of an object about a single axis. A set of two gimbals, one mounted on the other with pivot axes orthogonal, may be used to allow an object mounted on the innermost gimbal to remain immobile regardless of the motion of its support...
led) to control the rocket.

The Boeing
Boeing
The Boeing Company is an American multinational aerospace and defense corporation, founded in 1916 by William E. Boeing in Seattle, Washington. Boeing has expanded over the years, merging with McDonnell Douglas in 1997. Boeing Corporate headquarters has been in Chicago, Illinois since 2001...
Company was awarded the contract to manufacture the S-IC on December 15, 1961. By this time the general design of the stage had been decided on by the engineers at the Marshall Space Flight Center
Marshall Space Flight Center
The George C. Marshall Space Flight Center is the U.S. government's civilian rocketry and spacecraft propulsion research center. The largest center of NASA, MSFC's first mission was developing the Saturn launch vehicles for the Apollo moon program...
(MSFC). The main place of manufacture was the Michoud Assembly Facility
Michoud Assembly Facility
The Michoud Assembly Facility is an 832-acre site owned by NASA and located in New Orleans East, a large district within the city of New Orleans, Louisiana, United States. Organizationally, it is part of NASA's Marshall Space Flight Center...
, New Orleans. Wind tunnel testing took place in Seattle and the machining of the tools needed to build the stages at Wichita
Wichita, Kansas
Wichita is the largest city in the U.S. state of Kansas.As of the 2010 census, the city population was 382,368. Located in south-central Kansas on the Arkansas River, Wichita is the county seat of Sedgwick County and the principal city of the Wichita metropolitan area...
, Kansas
Kansas
Kansas is a US state located in the Midwestern United States. It is named after the Kansas River which flows through it, which in turn was named after the Kansa Native American tribe, which inhabited the area. The tribe's name is often said to mean "people of the wind" or "people of the south...
.

MSFC built the first three test stages (S-IC-T, the S-IC-S, and the S-IC-F) and the first two flight models (S-IC-1 and -2). They were built using tools produced in Wichita.

It took roughly 7 to 9 months to build the tanks and 14 months to complete a stage. The first stage built by Boeing was S-IC-D, a test model.

The largest and heaviest portion of the S-IC was the thrust structure, weighing 21 metric tons. It was designed to support the thrust of the five engines and redistribute it evenly across the base of the rocket. There were four anchors which held down the rocket as it built thrust. These were among the largest aluminum forgings produced in the U.S. at the time, 4.3 meters long and 816 kilograms in weight. The four stabilising fins withstood a temperature of 1100 °C.

Above the thrust structure was the fuel tank, containing 770,000 liters of RP-1 fuel. The tank itself had a mass of 11 metric tons dry and could release 7300 liters per second. Nitrogen
Nitrogen
Nitrogen is a chemical element that has the symbol N, atomic number of 7 and atomic mass 14.00674 u. Elemental nitrogen is a colorless, odorless, tasteless, and mostly inert diatomic gas at standard conditions, constituting 78.08% by volume of Earth's atmosphere...
was bubbled through the tank before launch to keep the fuel mixed. During flight the fuel was pressurized using helium
Helium
Helium is the chemical element with atomic number 2 and an atomic weight of 4.002602, which is represented by the symbol He. It is a colorless, odorless, tasteless, non-toxic, inert, monatomic gas that heads the noble gas group in the periodic table...
, that was stored in tanks in the liquid oxygen tank above.

Between the fuel and liquid oxygen tanks was the intertank.
The liquid oxygen tank held 1,204,000 liters of LOX. It raised special issues for the designer. The lines through which the LOX ran to the engine had to be straight and therefore had to pass through the fuel tank. This meant insulating these lines inside a tunnel to stop fuel freezing to the outside and also meant five extra holes in the top of the fuel tank.