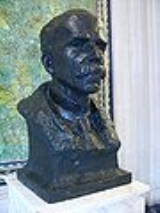 Encyclopedia
Ruy Barbosa de Oliveira (November 5, 1849 – March 1, 1923) was a Brazil
Brazil
Brazil , officially the Federative Republic of Brazil , is the largest country in South America. It is the world's fifth largest country, both by geographical area and by population with over 192 million people...
ian writer
Writer
A writer is a person who produces literature, such as novels, short stories, plays, screenplays, poetry, or other literary art. Skilled writers are able to use language to portray ideas and images....
, jurist
Jurist
A jurist or jurisconsult is a professional who studies, develops, applies, or otherwise deals with the law. The term is widely used in American English, but in the United Kingdom and many Commonwealth countries it has only historical and specialist usage...
, and politician
Politician
A politician, political leader, or political figure is an individual who is involved in influencing public policy and decision making...
.

Born in Salvador da Bahia, he was a federal representative
Chamber of Deputies of Brazil
The Chamber of Deputies of Brazil is a federal legislative body and the lower house of the National Congress of Brazil. As of 2006, the chamber comprises 513 deputies, who are elected by proportional representation to serve four-year terms...
, senator
Senate of Brazil
The Federal Senate of Brazil is the upper house of the National Congress of Brazil. Created by the first Constitution of the Brazilian Empire in 1824, it was inspired by the United Kingdom's House of Lords, but with the Proclamation of the Republic in 1889 it became closer to the United States...
, Minister of Finance
Ministry of Finance (Brazil)
The Ministry of Finance of Brazil was created in 1808 with the title Secretaria de Estado dos Negócios do Brazil e da Fazenda. The ministry is responsible for formulating and implementing the country's economic policy.-External links:*...
and diplomat
Diplomat
A diplomat is a person appointed by a state to conduct diplomacy with another state or international organization. The main functions of diplomats revolve around the representation and protection of the interests and nationals of the sending state, as well as the promotion of information and...
. For his distinguished participation in the Hague Peace Conference of 1907
Hague Conventions (1899 and 1907)
The Hague Conventions were two international treaties negotiated at international peace conferences at The Hague in the Netherlands: The First Hague Conference in 1899 and the Second Hague Conference in 1907...
, he earned the nickname "Eagle of the Hague". He ran unsuccessfully for the presidency of Brazil in 1910 and again in 1919.

Ruy Barbosa gave his first public speech for the abolition of slavery
Slavery
Slavery is a system under which people are treated as property to be bought and sold, and are forced to work. Slaves can be held against their will from the time of their capture, purchase or birth, and deprived of the right to leave, to refuse to work, or to demand compensation...
when he was 19. For the rest of his life he remained an uncompromising defender of civil liberties
Civil liberties
Civil liberties are rights and freedoms that provide an individual specific rights such as the freedom from slavery and forced labour, freedom from torture and death, the right to liberty and security, right to a fair trial, the right to defend one's self, the right to own and bear arms, the right...
. Slavery in Brazil
Slavery in Brazil
Slavery in Brazil shaped the country's social structure and ethnic landscape. During the colonial epoch and for over six decades after the 1822 independence, slavery was a mainstay of the Brazilian economy, especially in mining, cotton, and sugar cane production.Brazil obtained an estimated 35% of...
was finally abolished by the Lei Áurea
Lei Áurea
The Lei Áurea , adopted on May 13, 1888, was the law that abolished slavery in Brazil.It was preceded by the Rio Branco Law of September 28, 1871 , which freed all children born to slave parents, and by the Saraiva-Cotegipe Law , of September 28, 1885, that freed slaves when they reached the age of...
("Golden Law") in 1888. Part of Barbosa's legacy to history is that he authorised, as minister of finance on December 14, 1890, the destruction of most government records relating to slavery. The avowed reason for this destruction, which took several years to be enacted and was followed by his successors, was to erase the "stain" of slavery on Brazilian history. However, historians concur to say, today, that Barbosa aimed by this measure at impeding any possible indemnization of the former slave-owners for this liberation. Indeed, eleven days after the abolition of slavery, a law project was deposed at the Chamber, proposing some indemnization to the slave owners.

Barbosa's liberal ideas were influential in drafting of the first republican constitution
Constitution of Brazil
During its independent political history, Brazil has had seven constitutions. The most recent was ratified on October 5, 1988.-Imperial Constitution :Background...
. He was forced into exile in 1893 by President Floriano Peixoto for two years before returning and being elected as a Senator. He headed the Brazilian delegation to the Second Hague Conference and was brilliant in its deliberations. As candidate of the Civilista Party in the presidential elections of 1910, Barbosa waged one of the most memorable campaigns in Brazilian politics. He was not successful and lost to Marshal Hermes da Fonseca.

He was a supporter of fiat money
Fiat money
Fiat money is money that has value only because of government regulation or law. The term derives from the Latin fiat, meaning "let it be done", as such money is established by government decree. Where fiat money is used as currency, the term fiat currency is used.Fiat money originated in 11th...
, as opposed to a gold standard
Gold standard
The gold standard is a monetary system in which the standard economic unit of account is a fixed mass of gold. There are distinct kinds of gold standard...
, in Brazil. During his term as minister of finances, he implemented far-reaching reforms of Brazil's financial regime, instituting a vigorously expansionist monetary policy
Monetary policy
Monetary policy is the process by which the monetary authority of a country controls the supply of money, often targeting a rate of interest for the purpose of promoting economic growth and stability. The official goals usually include relatively stable prices and low unemployment...
. The result was chaos and instability: the so-called fiat experiment was a dismal failure. An orthodox backlash followed under the Murtinho program later in the decade.