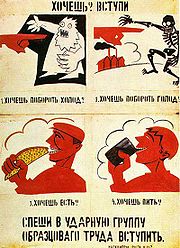 Russian Telegraph Agency , abbr.
Abbreviation
An abbreviation is a shortened form of a word or phrase. Usually, but not always, it consists of a letter or group of letters taken from the word or phrase...
Rosta was the state
State media
State media or state-owned media is media for mass communication which is ultimately controlled and/or funded by the state. These news outlets may be the sole media outlet or may exist in competition with privately-controlled media.-Overview:...
news agency
News agency
A news agency is an organization of journalists established to supply news reports to news organizations: newspapers, magazines, and radio and television broadcasters. Such an agency may also be referred to as a wire service, newswire or news service.-History:The oldest news agency is Agence...
in Soviet Russia
Russian Soviet Federative Socialist Republic
The Russian Soviet Federative Socialist Republic , commonly referred to as Soviet Russia, Bolshevik Russia, or simply Russia, was the largest, most populous and economically developed republic in the former Soviet Union....
(1918-35). After the creation of Telegraph Agency of the Soviet Union
Telegraph Agency of the Soviet Union
The Telegraph Agency of the Soviet Union , was the central agency for collection and distribution of internal and international news for all Soviet newspapers, radio and television stations...
in 1925, it remained the news agency of Soviet Russia. Its name was associated with Rosta Windows .

Rosta Windows or Satirical Rosta Windows were stencil
Stencil
A stencil is a thin sheet of material, such as paper, plastic, or metal, with letters or a design cut from it, used to produce the letters or design on an underlying surface by applying pigment through the cut-out holes in the material. The key advantage of a stencil is that it can be reused to...
-replicated propaganda
Propaganda
Propaganda is a form of communication that is aimed at influencing the attitude of a community toward some cause or position so as to benefit oneself or one's group....
poster
Poster
A poster is any piece of printed paper designed to be attached to a wall or vertical surface. Typically posters include both textual and graphic elements, although a poster may be either wholly graphical or wholly text. Posters are designed to be both eye-catching and informative. Posters may be...
s created by artists and poets within the Rosta system, under the supervision of the Chief Committee of Political Education during 1919-21. Inheriting the Russia
Russia
Russia or , officially known as both Russia and the Russian Federation , is a country in northern Eurasia. It is a federal semi-presidential republic, comprising 83 federal subjects...
n design traditions of lubok
Lubok
A lubok is a Russian popular print, characterized by simple graphics and narratives derived from literature, religious stories and popular tales. Lubki prints were used as decoration in houses and inns...
and rayok
Rayok
Rayok literally means "small paradise" in Russian. By extension it came to mean a fairground peep show, as "The Fall" was one of the most popular topics for these. The show itself was performed with the help of a box with pictures viewed through magnifying lenses...
, the main topics were current political events. They were usually displayed in windows, hence the name.

The first Rosta window was created in Moscow by Mikhail Cheremnykh (1890-1962). He was soon joined by Vladimir Mayakovsky
Vladimir Mayakovsky
Vladimir Vladimirovich Mayakovsky was a Russian and Soviet poet and playwright, among the foremost representatives of early-20th century Russian Futurism.- Early life :...
, a popular and prolific author, Dmitry Moor
Dmitry Moor
D. Moor was the professional name of Dmitry Stakhievich Orlov , a Russian artist noted for his propaganda posters.Graphic Design - Soviet Russia 1918...
(1883-1946), Amshey Nurenberg
Amshey Nurenberg
Amshey Markovich Nurenberg was a Ukrainian, Russian and Soviet painter, graphic artist, art critic, and memoirist.In 1904 - 1910 he has studied in the Odessa School of Arts with Professor Cyriaque Costandi. After having graduated from the School he continued his education in Paris...
(1887-1979), Alexander Rodchenko
Alexander Rodchenko
Aleksander Mikhailovich Rodchenko was a Russian artist, sculptor, photographer and graphic designer. He was one of the founders of constructivism and Russian design; he was married to the artist Varvara Stepanova....
, and others. Similar projects were performed in other Soviet cities. Cheremnykh and Mayakovsky for example produced a poster in 1921 satirising a French
French people
The French are a nation that share a common French culture and speak the French language as a mother tongue. Historically, the French population are descended from peoples of Celtic, Latin and Germanic origin, and are today a mixture of several ethnic groups...
delegation led by Joseph Noulens
Joseph Noulens
Joseph Noulens was a French politician and diplomat.Noulens became a member of the Chamber of Deputies in 1903 and served as Minister of War from 1913 to l914 and then as Minister of Finance from 1914 to 1915. In 1920 he became a Senator.-Involvement in Russia:In June 1917 he was appointed French...
.

The design featured graphical simplicity suitable for viewing from distance and often used lubok
Lubok
A lubok is a Russian popular print, characterized by simple graphics and narratives derived from literature, religious stories and popular tales. Lubki prints were used as decoration in houses and inns...
-styled sequences of pictures according to some plot, similar to modern comics
Comics
Comics denotes a hybrid medium having verbal side of its vocabulary tightly tied to its visual side in order to convey narrative or information only, the latter in case of non-fiction comics, seeking synergy by using both visual and verbal side in...
. The posters were not printed but rather painted with cutout stencils made from cardboard. Once the required number of posters was painted, the stencils were sent to another city and put in circulation throughout the Soviet Union.