Encyclopedia
Ruhnama is a book written by Saparmurat Niyazov
Saparmurat Niyazov
Saparmurat Atayevich Niyazov; , was a Turkmen politician who served as President of Turkmenistan from 2 November 1990 until his death in 2006...
, late President for Life
President for Life
President for Life is a title assumed by some dictators to remove their term limit, in the hope that their authority, legitimacy, and term will never be disputed....
of Turkmenistan
Turkmenistan
Turkmenistan , formerly also known as Turkmenia is one of the Turkic states in Central Asia. Until 1991, it was a constituent republic of the Soviet Union, the Turkmen Soviet Socialist Republic . Turkmenistan is one of the six independent Turkic states...
, combining spiritual/moral guidance, autobiography
Autobiography
An autobiography is a book about the life of a person, written by that person.-Origin of the term:...
and revisionist
Historical revisionism
In historiography, historical revisionism is the reinterpretation of orthodox views on evidence, motivations, and decision-making processes surrounding a historical event...
history, much of it is of dubious or disputed factuality and accuracy. The text includes many stories and poems, including those by Sufi poet Magtymguly Pyragy
Magtymguly Pyragy
Magtymguly Pyragy was a Turkmen spiritual leader and philosophical poet who made significant efforts to secure independence and autonomy for his people in the 18th century....
. It was intended as the "spiritual guidance of the nation" and the basis of the nation's arts and literature, by creating a positive image of the Turkmen people, a heroic interpretation of its history, the review of Turkmen customs and the definition of "moral, family, social and religious norms for modern Turkmens".

The Ruhnama was introduced to Turkmen culture in a gradual but eventually pervasive way. Niyazov first placed copies in the nation's schools and libraries but eventually went as far as to make an exam on its teachings an element of the driving test. It was mandatory to read Ruhnama in schools, universities and governmental organizations. New governmental employees were tested on the book at job interviews.

In March 2006, Niyazov was recorded as saying that he had interceded with God to ensure that any student who read the book three times would automatically get into heaven
Heaven
Heaven, the Heavens or Seven Heavens, is a common religious cosmological or metaphysical term for the physical or transcendent place from which heavenly beings originate, are enthroned or inhabit...
. After the death of Niyazov, it didn't lose its popularity. In December 2009, Gurbanguly Berdymukhammedov still strongly recommended the government to use Ruhnama as an instrument of youth education.

Niyazov issued the work's first volume in 2001, saying it would "eliminate all shortcomings, to raise the spirit of the Turkmens". In 2004, Niyazov issued a second volume, covering morals, philosophy and life conduct. The book was a substantial part of Niyazov's personality cult and his administration's policy of Turkmenization
Turkmenization
Turkmenization is the set of domestic policies the Niyazov administration used in Turkmenistan from 1991 to December 2006 to force ethnic minorities to adopt Turkmen culture...
. The government required bookstores and government offices to display it prominently — and mosque
Mosque
A mosque is a place of worship for followers of Islam. The word is likely to have entered the English language through French , from Portuguese , from Spanish , and from Berber , ultimately originating in — . The Arabic word masjid literally means a place of prostration...
s to keep it as prominent as the Qur'an
Qur'an
The Quran , also transliterated Qur'an, Koran, Alcoran, Qur’ān, Coran, Kuran, and al-Qur’ān, is the central religious text of Islam, which Muslims consider the verbatim word of God . It is regarded widely as the finest piece of literature in the Arabic language...
. After some imam
Imam
An imam is an Islamic leadership position, often the worship leader of a mosque and the Muslim community. Similar to spiritual leaders, the imam is the one who leads Islamic worship services. More often, the community turns to the mosque imam if they have a religious question...
s refused to comply with this demand, alleging that compliance would be blasphemous, the state reportedly demolished some mosques.

In May 2004, the government-controlled website Turkmenistan: The Golden Age released a statement announcing the phasing out of "several educational and scientific directions and subjects of minor importance." The teaching of algebra, physics, and physical education has effectively ended in Turkmenistan. In place, students are encouraged to memorize the Ruhnama and chant slogans praising President Saparmyrat Niyazov. A 30-year-old engineer reported that "all [his son] learns is passages from the 'Ruhnama', and he has started telling me off because he has memorised more of the book than me."

In 2011, Ruhnama was removed as a mandatory subject in Turkmen schools. However, it was noted that books written by Berdymukhamedov, Niyzov's successor, had begun to be included in coursework. There were concerns that the cult around Niyzov would simply be replaced by another cult around Berdymukhamedov.


The Ruhnamas role in society 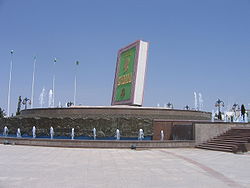 Knowledge of the Ruhnama is compulsory, imposed on religious communities and society generally. The work is the main component of education from primary school to university. Knowledge of the text (up to the ability to recite passages from it exactly) is required for passing education exams, holding any state employment and to qualify for a driving license. Official ceremonies have featured hundreds of singing Turkmens holding and performing choreography with the book.

Public criticism of or even insufficient reverence to the text was seen as the equivalent to showing disrespect to the former President himself, and harshly punished by dispossession, imprisonment or torture of the offender or the offender's whole family if the violation were grave enough. Since the passing of Niyazov, punishment for disrespect of the book is in a questionable status.

There is an enormous mechanical statue of the book in Ashgabat, the country's capital. Each evening at 8:00 pm, the cover opens and a recording of a passage from the book is played with accompanying video.

Months after President for Life
President for Life
President for Life is a title assumed by some dictators to remove their term limit, in the hope that their authority, legitimacy, and term will never be disputed....
Niyazov's death (in December 2006), the Ruhnamas grip on the Turkmen public seemed unweakened, the AP
Associated Press
The Associated Press is an American news agency. The AP is a cooperative owned by its contributing newspapers, radio and television stations in the United States, which both contribute stories to the AP and use material written by its staff journalists...
's Benjamin Harvey reported in May 2007. Television stations featured solemn readings from the book. "The Ruhnama is a holy book" was carved into one side of the entrance arches at Central Asia's largest mosque in Niyazov's hometown — and "The Qur'an is Allah's book" was carved into the other, wrote Harvey, adding: 'Posters of the Ruhnama flank the roads of the capital city, Ashgabat, alongside likenesses of Niyazov. Quotations from it are inscribed on the desert city's fantastic array of fountains, monuments and official buildings.'

Michael Denison, of the United Kingdom
United Kingdom
The United Kingdom of Great Britain and Northern IrelandIn the United Kingdom and Dependencies, other languages have been officially recognised as legitimate autochthonous languages under the European Charter for Regional or Minority Languages...
's University of Leeds
Leeds
Leeds is a city and metropolitan borough in West Yorkshire, England. In 2001 Leeds' main urban subdivision had a population of 443,247, while the entire city has a population of 798,800 , making it the 30th-most populous city in the European Union.Leeds is the cultural, financial and commercial...
, told the UN
United Nations
The United Nations is an international organization whose stated aims are facilitating cooperation in international law, international security, economic development, social progress, human rights, and achievement of world peace...
Office for the Co-ordination of Humanitarian Affairs' IRIN News: "I don't think [the Ruhnama] will be disavowed [...] It might just [become] rather perfunctory." Others hope for restoration of full secondary and tertiary education and changes to the curriculum, which were cut back and reformed under Niyazov to be based primarily on the Ruhnama.

Questions remain about whether Niyazov actually wrote the Ruhnama himself; an anonymous scholar quoted in New Yorker Magazine claimed that Niyazov is "somewhat illiterate". It has been translated into 41 languages.