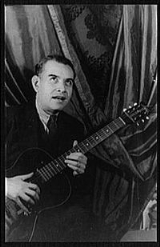 Encyclopedia
Rufino Tamayo was a Mexican painter of Zapotec heritage, born in Oaxaca de Juárez
Oaxaca, Oaxaca
The city and municipality of Oaxaca de Juárez, or simply Oaxaca, is the capital and largest city of the Mexican state of the same name . It is located in the Centro District in the Central Valleys region of the state, in the foothills of the Sierra Madre at the base of the Cerro del Fortín...
, Mexico
Mexico
The United Mexican States , commonly known as Mexico , is a federal constitutional republic in North America. It is bordered on the north by the United States; on the south and west by the Pacific Ocean; on the southeast by Guatemala, Belize, and the Caribbean Sea; and on the east by the Gulf of...
. Tamayo was active in the mid-20th century in Mexico and New York, painting figurative abstraction with surrealist influences.

Tamayo's Zapotec heritage is often cited as an early influence. In 1911, he was orphaned and moved to Mexico City
Mexico City
Mexico City is the Federal District , capital of Mexico and seat of the federal powers of the Mexican Union. It is a federal entity within Mexico which is not part of any one of the 31 Mexican states but belongs to the federation as a whole...
to live with his aunt.

He enrolled at Escuela Nacional de Artes Plasticas in 1917 to study art. While studying, Tamayo experimented with and was influenced by Cubism
Cubism
Cubism was a 20th century avant-garde art movement, pioneered by Pablo Picasso and Georges Braque, that revolutionized European painting and sculpture, and inspired related movements in music, literature and architecture...
, Impressionism
Impressionism
Impressionism was a 19th-century art movement that originated with a group of Paris-based artists whose independent exhibitions brought them to prominence during the 1870s and 1880s...
, and Fauvism
Fauvism
Fauvism is the style of les Fauves , a short-lived and loose group of early twentieth-century Modern artists whose works emphasized painterly qualities and strong colour over the representational or realistic values retained by Impressionism...
, among other popular art movements of the time, but with a distinctly Mexican feel.

After the Mexican Revolution
Mexican Revolution
The Mexican Revolution was a major armed struggle that started in 1910, with an uprising led by Francisco I. Madero against longtime autocrat Porfirio Díaz. The Revolution was characterized by several socialist, liberal, anarchist, populist, and agrarianist movements. Over time the Revolution...
, Tamayo devoted himself to creating an identity in his work. Tamayo expressed what he believed was the traditional Mexico, and refused to follow the more political trend that many of his contemporaries did, such as José Clemente Orozco
José Clemente Orozco
José Clemente Orozco was a Mexican social realist painter, who specialized in bold murals that established the Mexican Mural Renaissance together with murals by Diego Rivera, David Alfaro Siqueiros, and others...
, Diego Rivera
Diego Rivera
Diego María de la Concepción Juan Nepomuceno Estanislao de la Rivera y Barrientos Acosta y Rodríguez was a prominent Mexican painter born in Guanajuato, Guanajuato, an active communist, and husband of Frida Kahlo . His large wall works in fresco helped establish the Mexican Mural Movement in...
, Oswaldo Guayasamin
Oswaldo Guayasamín
Oswaldo Guayasamín was a Quechua native and Ecuadorian master painter and sculptor.-Early life:...
, and David Alfaro Siqueiros
David Alfaro Siqueiros
José David Alfaro Siqueiros was a social realist painter, known for his large murals in fresco that helped establish the Mexican Mural Renaissance, together with works by Diego Rivera and José Clemente Orozco, and also a member of the Mexican Communist Party who participated in an...
. Due to this choice, he was seen by some as a "traitor" to the political cause, and he felt he could not freely express his art, so in 1926, he decided to leave Mexico and move to New York
New York
New York is a state in the Northeastern region of the United States. It is the nation's third most populous state. New York is bordered by New Jersey and Pennsylvania to the south, and by Connecticut, Massachusetts and Vermont to the east...
. Prior to leaving, he organized a one-man show of his work in Mexico City, where he was noticed for his individuality. Tamayo returned to Mexico in 1929 to have another solo show, this time being met with high praise and media coverage.

Rufino Tamayo’s legacy to the history of art is truly found in Tamayo’s oeuvre of original graphic prints, in which Tamayo cultivated every technique. Rufino Tamayo’s graphic work was produced between 1925 and 1991 and includes the mediums of woodcuts, lithographs, etchings and mixografia prints. With the help of Mexican painter and engineer Luis Remba, Rufino Tamayo expanded the technical and aesthetic possibilities of the graphic arts by developing a new genre of multiples, which they named "Mixografia". The Mixografia technique is a unique fine art printing process that allows for the production of prints with three-dimensional texture. The technique not only registered the texture and volume of Rufino Tamayo's design, but it also granted Tamayo the freedom to use any combination of solid materials in its creation. Rufino Tamayo was delighted with the Mixografia process, and Tamayo created some 80 Original Mixographs.

One of their most famous mixografía was titled Dos Personajes Atacados por Perros ("Two Characters Attacked by Dogs").

Tamayo also painted murals, some of which are displayed inside Palacio Nacional de
Bellas Artes
Palacio de Bellas Artes
The Palacio de Bellas Artes is the most important cultural center in Mexico City as well as the rest of the country of Mexico...
opera house
Opera house
An opera house is a theatre building used for opera performances that consists of a stage, an orchestra pit, audience seating, and backstage facilities for costumes and set building...
in Mexico City
Mexico City
Mexico City is the Federal District , capital of Mexico and seat of the federal powers of the Mexican Union. It is a federal entity within Mexico which is not part of any one of the 31 Mexican states but belongs to the federation as a whole...
, such as Nacimiento de la nacionalidad ("Birth of the Nationality"), (1952).

From 1937 to 1949, Tamayo and his wife Olga lived in New York, becoming widely recognized, and he painted some of his most valuable works during that time. He had his first show in New York City at Valentine Gallery. He gained credibility and went on to show at Knoedler Gallery and Marlborough Gallery. While in New York, he helped train Helen Frankenthaler at the Dalton School in New York. In 1948 his first major retrospective was done at the Palacio de Bellas Artes in Mexico City, and while he was still controversial, his popularity was high. Still uncomfortable with the political differences and controversy, Tamayo and Olga moved to Paris in 1949, where he was welcomed by the artists of Europe. He remained in Paris for 10 years.

In 1959, Tamayo and his wife returned to Mexico permanently, where Tamayo built an art museum in his home town of Oaxaca, the Museo Rufino Tamayo
Museo Rufino Tamayo
The Museo Rufino Tamayo is an art museum in the city of Oaxaca, Oaxaca, in southern Mexico.Housed in a building constructed in 1979 by the architects Teodoro González de León and Abraham Zabludovsky, the museum contains collections of pre-Columbian art once owned by artist Rufino Tamayo...
. In 1972, Tamayo was the subject of the documentary film, Rufino Tamayo: The Sources of his Art by Gary Conklin
Gary Conklin
Gary Conklin is an independent American filmmaker based in Los Angeles, California.Conklin works predominantly in the documentary genre. His films focus on cultural icons of the 20th century...
.

Tamayo painted his last painting in 1989, at the age of 90, Hombre con flor (Man with flower), a self-portrait.

Tamayo's work has been displayed in museums throughout the world, including the Solomon R. Guggenheim Museum
Solomon R. Guggenheim Museum
The Solomon R. Guggenheim Museum is a well-known museum located on the Upper East Side of Manhattan in New York City, United States. It is the permanent home to a renowned collection of Impressionist, Post-Impressionist, early Modern, and contemporary art and also features special exhibitions...
in New York City
New York City
New York is the most populous city in the United States and the center of the New York Metropolitan Area, one of the most populous metropolitan areas in the world. New York exerts a significant impact upon global commerce, finance, media, art, fashion, research, technology, education, and...
, The Phillips Collection in Washington
Washington, D.C.
Washington, D.C., formally the District of Columbia and commonly referred to as Washington, "the District", or simply D.C., is the capital of the United States. On July 16, 1790, the United States Congress approved the creation of a permanent national capital as permitted by the U.S. Constitution....
, and The Museo Nacional Centro de Arte Reina Sofia in Madrid
Madrid
Madrid is the capital and largest city of Spain. The population of the city is roughly 3.3 million and the entire population of the Madrid metropolitan area is calculated to be 6.271 million. It is the third largest city in the European Union, after London and Berlin, and its metropolitan...
, Spain
Spain
Spain , officially the Kingdom of Spain languages]] under the European Charter for Regional or Minority Languages. In each of these, Spain's official name is as follows:;;;;;;), is a country and member state of the European Union located in southwestern Europe on the Iberian Peninsula...
.

On June 12, 1991, Tamayo was admitted to Mexico City's National Institute of Medical Sciences and Nutrition for respiratory and heart failure. He suffered an acute stroke and died on June 24, 1991.

Tamayo's 1970 painting Tres Personajes
Tres Personajes
Tres Personajes, second version was painted by Mexican Modernist artist Rufino Tamayo in 1970. The brightly colored 51" by 38" painting is considered to be significant as an example of Tamayo's mature style...
was bought by a Houston
Houston, Texas
Houston is the fourth-largest city in the United States, and the largest city in the state of Texas. According to the 2010 U.S. Census, the city had a population of 2.1 million people within an area of . Houston is the seat of Harris County and the economic center of , which is the ...
man as a gift for his wife in 1977, then stolen from their storage locker in 1987 during a move. In 2003, Elizabeth Gibson found the painting in the trash on a New York City curb. Although she knew little about modern art
Modern art
Modern art includes artistic works produced during the period extending roughly from the 1860s to the 1970s, and denotes the style and philosophy of the art produced during that era. The term is usually associated with art in which the traditions of the past have been thrown aside in a spirit of...
, Gibson felt the painting "had power" and took it without knowing its origin or market value. She spent four years trying to learn about the work, eventually learning from the PBS website that it had been featured on an episode of Antiques Roadshow
Antiques Roadshow
Antiques Roadshow is a British television show in which antiques appraisers travel to various regions of the United Kingdom to appraise antiques brought in by local people. It has been running since 1979...
. After seeing the Missing Masterpieces segment about Tres Personajes, Gibson and the former owner arranged to sell the painting at a Sotheby's
Sotheby's
Sotheby's is the world's fourth oldest auction house in continuous operation.-History:The oldest auction house in operation is the Stockholms Auktionsverk founded in 1674, the second oldest is Göteborgs Auktionsverk founded in 1681 and third oldest being founded in 1731, all Swedish...
auction. In November, 2007 Gibson received a $15,000 reward plus a portion of the $1,049,000 auction sales price.