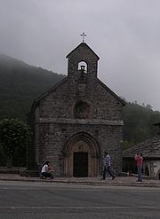 Encyclopedia
Roncesvalles is a small village and municipality
Municipality
A municipality is essentially an urban administrative division having corporate status and usually powers of self-government. It can also be used to mean the governing body of a municipality. A municipality is a general-purpose administrative subdivision, as opposed to a special-purpose district...
in Navarre
Navarre
Navarre , officially the Chartered Community of Navarre is an autonomous community in northern Spain, bordering the Basque Country, La Rioja, and Aragon in Spain and Aquitaine in France...
, northern Spain
Spain
Spain , officially the Kingdom of Spain languages]] under the European Charter for Regional or Minority Languages. In each of these, Spain's official name is as follows:;;;;;;), is a country and member state of the European Union located in southwestern Europe on the Iberian Peninsula...
. It is situated on the small river Urrobi at an altitude of some 900 metres in the Pyrenees
Pyrenees
The Pyrenees is a range of mountains in southwest Europe that forms a natural border between France and Spain...
, about 8 kilometres from the French
France
The French Republic , The French Republic , The French Republic , (commonly known as France , is a unitary semi-presidential republic in Western Europe with several overseas territories and islands located on other continents and in the Indian, Pacific, and Atlantic oceans. Metropolitan France...
frontier.

The small collegiate church
Collegiate church
In Christianity, a collegiate church is a church where the daily office of worship is maintained by a college of canons; a non-monastic, or "secular" community of clergy, organised as a self-governing corporate body, which may be presided over by a dean or provost...
contains several curious relic
Relic
In religion, a relic is a part of the body of a saint or a venerated person, or else another type of ancient religious object, carefully preserved for purposes of veneration or as a tangible memorial...
s associated with Roland. The battle is said to have been fought in the picturesque valley known as Valcarlos, which is now occupied by a hamlet bearing the same name, and in the adjoining pass of Ibañeta (Roncevaux Pass
Roncevaux Pass
Roncevaux Pass is a high mountain pass in the Pyrenees near the border between France and Spain. The pass itself is entirely in Spain.According to tradition, it is the site where Roland died during the Battle of Roncevaux Pass in 778, a landmark in Basque history leading to the foundation of the...
). Both of these are traversed by the main road leading north from Roncesvalles to Saint-Jean-Pied-de-Port
Saint-Jean-Pied-de-Port
Saint-Jean-Pied-de-Port is a commune in the Pyrénées-Atlantiques department in south-western France close to Ostabat in the Pyrenean foothills....
, in the French Basque Country
Northern Basque Country
The French Basque Country or Northern Basque Country situated within the western part of the French department of the Pyrénées-Atlantiques constitutes the north-eastern part of the Basque Country....
.

Since the Middle Ages
Middle Ages
The Middle Ages is a periodization of European history from the 5th century to the 15th century. The Middle Ages follows the fall of the Western Roman Empire in 476 and precedes the Early Modern Era. It is the middle period of a three-period division of Western history: Classic, Medieval and Modern...
, this collegiate church has been a favorite resting place for Catholic
Catholic
The word catholic comes from the Greek phrase , meaning "on the whole," "according to the whole" or "in general", and is a combination of the Greek words meaning "about" and meaning "whole"...
pilgrim
Pilgrim
A pilgrim is a traveler who is on a journey to a holy place. Typically, this is a physical journeying to some place of special significance to the adherent of a particular religious belief system...
s along the Way of St. James
Way of St. James
The Way of St. James or St. James' Way is the pilgrimage route to the Cathedral of Santiago de Compostela in Galicia in northwestern Spain, where tradition has it that the remains of the apostle Saint James are buried....
, since it is the first place to have a rest after crossing the French Pyrenees. Every year thousands of pilgrims begin their way to Santiago de Compostela
Santiago de Compostela
Santiago de Compostela is the capital of the autonomous community of Galicia, Spain.The city's Cathedral is the destination today, as it has been throughout history, of the important 9th century medieval pilgrimage route, the Way of St. James...
at Roncesvalles.