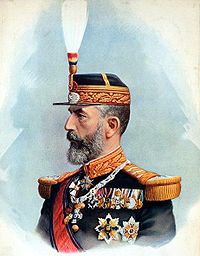 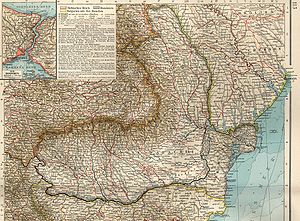 The Romanian Old Kingdom ( or just Regat; or ) is a colloquial term referring to the territory covered by the first independent Romania
Romania
Romania is a country located at the crossroads of Central and Southeastern Europe, on the Lower Danube, within and outside the Carpathian arch, bordering on the Black Sea...
n nation state, which was composed of the Danubian Principalities
Danubian Principalities
Danubian Principalities was a conventional name given to the Principalities of Moldavia and Wallachia, which emerged in the early 14th century. The term was coined in the Habsburg Monarchy after the Treaty of Küçük Kaynarca in order to designate an area on the lower Danube with a common...
—Wallachia
Wallachia
Wallachia or Walachia is a historical and geographical region of Romania. It is situated north of the Danube and south of the Southern Carpathians...
and Moldavia
Moldavia
Moldavia is a geographic and historical region and former principality in Eastern Europe, corresponding to the territory between the Eastern Carpathians and the Dniester river...
. It was achieved when, under the auspices of the Treaty of Paris (1856)
Treaty of Paris (1856)
The Treaty of Paris of 1856 settled the Crimean War between Russia and an alliance of the Ottoman Empire, the British Empire, Second French Empire, and the Kingdom of Sardinia. The treaty, signed on March 30, 1856 at the Congress of Paris, made the Black Sea neutral territory, closing it to all...
, the ad hoc Divans of both countries - which were under Imperial Ottoman
Ottoman Empire
The Ottoman EmpireIt was usually referred to as the "Ottoman Empire", the "Turkish Empire", the "Ottoman Caliphate" or more commonly "Turkey" by its contemporaries...
suzerainty
Suzerainty
Suzerainty occurs where a region or people is a tributary to a more powerful entity which controls its foreign affairs while allowing the tributary vassal state some limited domestic autonomy. The dominant entity in the suzerainty relationship, or the more powerful entity itself, is called a...
at the time - voted for Alexander Ioan Cuza as their prince, thus achieving a de facto
De facto
De facto is a Latin expression that means "concerning fact." In law, it often means "in practice but not necessarily ordained by law" or "in practice or actuality, but not officially established." It is commonly used in contrast to de jure when referring to matters of law, governance, or...
unification under the name of the United Principalities of Moldavia and Wallachia
United Principalities
The United Principalities of Moldavia and Wallachia, also known as the Romanian Principalities, was the official name of Romania following the 1859 election of Alexandru Ioan Cuza as prince or domnitor of both territories...
. The region itself is defined by the result of that political act, followed by the inclusion of Northern Dobruja
Northern Dobruja
Northern Dobruja is the part of Dobruja within the borders of Romania. It lies between the lower Danube river and the Black Sea, bordered in south by Bulgarian Southern Dobruja.-Geography:...
and the transfer of southern part of Bessarabia
Bessarabia
Bessarabia is a historical term for the geographic region in Eastern Europe bounded by the Dniester River on the east and the Prut River on the west....
to Russia in 1878, the proclamation of the Kingdom of Romania
Kingdom of Romania
The Kingdom of Romania was the Romanian state based on a form of parliamentary monarchy between 13 March 1881 and 30 December 1947, specified by the first three Constitutions of Romania...
in 1881, and the annexation of Southern Dobruja
Southern Dobruja
Southern Dobruja is an area of north-eastern Bulgaria comprising the administrative districts named for its two principal cities of Dobrich and Silistra...
in 1913.

The term came into use after World War I
World War I
World War I , which was predominantly called the World War or the Great War from its occurrence until 1939, and the First World War or World War I thereafter, was a major war centred in Europe that began on 28 July 1914 and lasted until 11 November 1918...
, when the Old Kingdom became Greater Romania
Greater Romania
The Greater Romania generally refers to the territory of Romania in the years between the First World War and the Second World War, the largest geographical extent of Romania up to that time and its largest peacetime extent ever ; more precisely, it refers to the territory of the Kingdom of...
, after including Transylvania
Transylvania
Transylvania is a historical region in the central part of Romania. Bounded on the east and south by the Carpathian mountain range, historical Transylvania extended in the west to the Apuseni Mountains; however, the term sometimes encompasses not only Transylvania proper, but also the historical...
, Banat
Banat
The Banat is a geographical and historical region in Central Europe currently divided between three countries: the eastern part lies in western Romania , the western part in northeastern Serbia , and a small...
, Bessarabia
Bessarabia
Bessarabia is a historical term for the geographic region in Eastern Europe bounded by the Dniester River on the east and the Prut River on the west....
, and Bukovina
Bukovina
Bukovina is a historical region on the northern slopes of the northeastern Carpathian Mountains and the adjoining plains.-Name:The name Bukovina came into official use in 1775 with the region's annexation from the Principality of Moldavia to the possessions of the Habsburg Monarchy, which became...
. Nowadays, the term mainly has a historical relevance, and is otherwise used as a common term for all regions in Romania included in both the Old Kingdom and present-day borders (namely: Wallachia, Moldavia, and Northern Dobruja).
The source of this article is wikipedia, the free encyclopedia.  The text of this article is licensed under the GFDL.