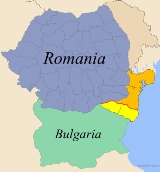 Encyclopedia
Southern Dobruja
Dobruja
Dobruja is a historical region shared by Bulgaria and Romania, located between the lower Danube river and the Black Sea, including the Danube Delta, Romanian coast and the northernmost part of the Bulgarian coast...
(Bulgarian
Bulgarian language
Bulgarian is an Indo-European language, a member of the Slavic linguistic group.Bulgarian, along with the closely related Macedonian language, demonstrates several linguistic characteristics that set it apart from all other Slavic languages such as the elimination of case declension, the...
: Южна Добруджа, Yuzhna Dobrudzha or simply Добруджа, Dobrudzha; Romanian
Romanian language
Romanian Romanian Romanian (or Daco-Romanian; obsolete spellings Rumanian, Roumanian; self-designation: română, limba română ("the Romanian language") or românește (lit. "in Romanian") is a Romance language spoken by around 24 to 28 million people, primarily in Romania and Moldova...
: Dobrogea de sud or Cadrilater, i.e. Quadrilater) is an area of north-eastern Bulgaria
Bulgaria
Bulgaria , officially the Republic of Bulgaria , is a parliamentary democracy within a unitary constitutional republic in Southeast Europe. The country borders Romania to the north, Serbia and Macedonia to the west, Greece and Turkey to the south, as well as the Black Sea to the east...
comprising the administrative districts named for its two principal cities of Dobrich
Dobrich
Dobrich is a town in northeastern Bulgaria, the administrative centre of Dobrich Province. With 91,030 inhabitants, as of February 2011, Dobrich is the ninth most populated town in Bulgaria, being the centre of the historical region of Southern Dobruja...
and Silistra
Silistra
Silistra is a port city of northeastern Bulgaria, lying on the southern bank of the lower Danube at the country's border with Romania. Silistra is the administrative centre of Silistra Province and one of the important cities of the historical region of Southern Dobrudzha...
. It has an area of 7,565 km² and a population of 358,000. 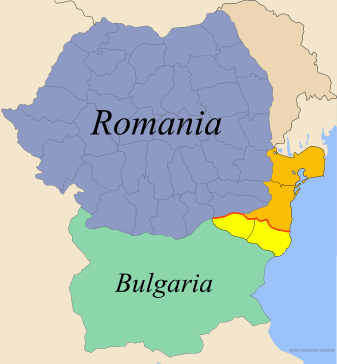 At the beginning of the modern era, Southern Dobruja had a mixed population of Bulgarians
Bulgarians
The Bulgarians are a South Slavic nation and ethnic group native to Bulgaria and neighbouring regions. Emigration has resulted in immigrant communities in a number of other countries.-History and ethnogenesis:...
and Turks
Turkic peoples
The Turkic peoples are peoples residing in northern, central and western Asia, southern Siberia and northwestern China and parts of eastern Europe. They speak languages belonging to the Turkic language family. They share, to varying degrees, certain cultural traits and historical backgrounds...
with several smaller minorities, including Gagauz
Gagauz
Gagauz may refer to:* Gagauz people* Gagauz language* Gagauzia...
, Crimean Tatars
Crimean Tatars in Bulgaria
After 1241 , the year of the earliest recorded Tatar invasion of Bulgaria, the Second Bulgarian Empire maintained constant political contacts with the Tatars. In this early period , "Tatar" was not an ethnonym but a general term for the armies of Genghis Khan’s successors...
and Romanians
Romanians
The Romanians are an ethnic group native to Romania, who speak Romanian; they are the majority inhabitants of Romania....
. In 1910, of the 282,007 inhabitants of Southern Dobruja, 134,355 (47.6%) were Bulgarians, 106,568 (37.8%) Turks, 12,192 (4.3%) Gypsies, 11,718 (4.1%) Tatars and 6,484 (2.4%) Romanians.

Southern Dobruja was part of the autonomous Bulgarian principality from the time of the liberation of Bulgaria
Bulgaria
Bulgaria , officially the Republic of Bulgaria , is a parliamentary democracy within a unitary constitutional republic in Southeast Europe. The country borders Romania to the north, Serbia and Macedonia to the west, Greece and Turkey to the south, as well as the Black Sea to the east...
from Ottoman
Ottoman Empire
The Ottoman EmpireIt was usually referred to as the "Ottoman Empire", the "Turkish Empire", the "Ottoman Caliphate" or more commonly "Turkey" by its contemporaries...
rule in 1878 until the Balkan Wars
Balkan Wars
The Balkan Wars were two conflicts that took place in the Balkans in south-eastern Europe in 1912 and 1913.By the early 20th century, Montenegro, Bulgaria, Greece and Serbia, the countries of the Balkan League, had achieved their independence from the Ottoman Empire, but large parts of their ethnic...
. After the defeat of Bulgaria in the Second Balkan War
Second Balkan War
The Second Balkan War was a conflict which broke out when Bulgaria, dissatisfied with its share of the spoils of the First Balkan War, attacked its former allies, Serbia and Greece, on 29 June 1913. Bulgaria had a prewar agreement about the division of region of Macedonia...
, the region was included in Romania
Romania
Romania is a country located at the crossroads of Central and Southeastern Europe, on the Lower Danube, within and outside the Carpathian arch, bordering on the Black Sea...
under the 1913 Treaty of Bucharest
Treaty of Bucharest, 1913
The Treaty of Bucharest was concluded on 10 August 1913, by the delegates of Bulgaria, Romania, Serbia, Montenegro and Greece.As Bulgaria had been completely isolated in the Second Balkan War , and as it was closely invested on its northern boundary by Romania and on its western frontier by the...
.

In 1914, Romania demanded all landowners prove their property and surrender to the Romanian state one third of the land they claimed or pay an equivalent of its value. This was similar to the agrarian reform
Agrarian reform
Agrarian reform can refer either, narrowly, to government-initiated or government-backed redistribution of agricultural land or, broadly, to an overall redirection of the agrarian system of the country, which often includes land reform measures. Agrarian reform can include credit measures,...
s in Romania which occurred the previous century, in which the landlords had to give up two-thirds of their land, which was then handed over to the peasants. In Southern Dobruja, many of the peasants who received the land were settlers, including tens of thousands of Aromanians
Aromanians
Aromanians are a Latin people native throughout the southern Balkans, especially in northern Greece, Albania, the Republic of Macedonia, Bulgaria, and as an emigrant community in Serbia and Romania . An older term is Macedo-Romanians...
from Macedonia
Macedonia (region)
Macedonia is a geographical and historical region of the Balkan peninsula in southeastern Europe. Its boundaries have changed considerably over time, but nowadays the region is considered to include parts of five Balkan countries: Greece, the Republic of Macedonia, Bulgaria, Albania, Serbia, as...
and Northern Greece
Greece
Greece , officially the Hellenic Republic , and historically Hellas or the Republic of Greece in English, is a country in southeastern Europe....
, as well as Romanians from Wallachia
Wallachia
Wallachia or Walachia is a historical and geographical region of Romania. It is situated north of the Danube and south of the Southern Carpathians...
, which led to claims that the reforms had a nationalist purpose.

On 7 September 1940 Southern Dobruja was restored to Bulgaria under the Treaty of Craiova
Treaty of Craiova
The Treaty of Craiova was signed on 7 September 1940 between the Kingdom of Bulgaria and the Kingdom of Romania. Under the terms of this treaty, Romania returned the southern part of Dobruja to Bulgaria and agreed to participate in organizing a population exchange...
. The treaty was followed by a mandatory population exchange
Population transfer
Population transfer is the movement of a large group of people from one region to another by state policy or international authority, most frequently on the basis of ethnicity or religion...
: about 110,000 Romanians (almost 95% of which settled there after 1913) were forced to leave Southern Dobruja, whereas 77,000 Bulgarians had to leave northern Dobruja. Only a few hundred Romanians and Aromanians are left in the region to this day.
The source of this article is wikipedia, the free encyclopedia.  The text of this article is licensed under the GFDL.