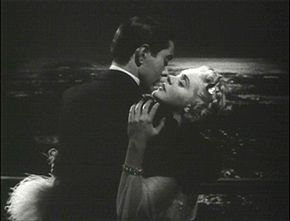 Romance films are love stories that focus on passion
Passion (emotion)
Passion is a term applied to a very strong feeling about a person or thing. Passion is an intense emotion compelling feeling, enthusiasm, or desire for something....
, emotion
Emotion
Emotion is a complex psychophysiological experience of an individual's state of mind as interacting with biochemical and environmental influences. In humans, emotion fundamentally involves "physiological arousal, expressive behaviors, and conscious experience." Emotion is associated with mood,...
, and the affectionate involvement of the main characters and the journey that their love takes through courtship or marriage
Marriage
Marriage is a social union or legal contract between people that creates kinship. It is an institution in which interpersonal relationships, usually intimate and sexual, are acknowledged in a variety of ways, depending on the culture or subculture in which it is found...
. Romance films make the love story or the search for love the main plot focus. Occasionally, lovers face obstacles such as finance
Finance
"Finance" is often defined simply as the management of money or “funds” management Modern finance, however, is a family of business activity that includes the origination, marketing, and management of cash and money surrogates through a variety of capital accounts, instruments, and markets created...
s, physical illness
Illness
Illness is a state of poor health. Illness is sometimes considered another word for disease. Others maintain that fine distinctions exist...
, various forms of discrimination
Discrimination
Discrimination is the prejudicial treatment of an individual based on their membership in a certain group or category. It involves the actual behaviors towards groups such as excluding or restricting members of one group from opportunities that are available to another group. The term began to be...
, psychological restraints or family that threaten to break their union of love. As in all romantic relationships, tensions of day-to-day life, temptation
Temptation
A temptation is an act that looks appealing to an individual. It is usually used to describe acts with negative connotations and as such, tends to lead a person to regret such actions, for various reasons: legal, social, psychological , health, economic, etc...
s (of infidelity
Infidelity
In many intimate relationships in many cultures there is usually an express or implied expectation of exclusivity, especially in sexual matters. Infidelity most commonly refers to a breach of the expectation of sexual exclusivity.Infidelity can occur in relation to physical intimacy and/or...
), and differences in compatibility enter into the plots of romantic films.

Romantic films often explore the essential themes of love at first sight
Love at first sight
Love at first sight is a common trope in Western literature, in which a person, character, or speaker feels romantic attraction for a stranger on the first sight of them...
, young with older love, unrequited love, obsessive love, sentimental love, spiritual love
Spirituality
Spirituality can refer to an ultimate or an alleged immaterial reality; an inner path enabling a person to discover the essence of his/her being; or the “deepest values and meanings by which people live.” Spiritual practices, including meditation, prayer and contemplation, are intended to develop...
, forbidden love, sexual and passionate love, sacrificial love explosive and destructive love, and tragic love
Tragedy
Tragedy is a form of art based on human suffering that offers its audience pleasure. While most cultures have developed forms that provoke this paradoxical response, tragedy refers to a specific tradition of drama that has played a unique and important role historically in the self-definition of...
. Romantic films serve as great escapes and fantasies for viewers, especially if the two people finally overcome their difficulties, declare their love, and experience life "happily ever after", implied by a reunion and final kiss.

Note: Not all romance films are about heterosexual couples. There is a history of romance films about same sex couples going back to 1919 with Anders als die Andern a.k.a. Different from the Others