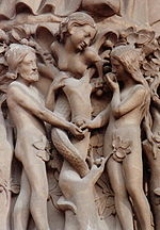 A temptation is an act that looks appealing to an individual. It is usually used to describe acts with negative connotations and as such, tends to lead a person to regret
Regret (emotion)
Regret is a negative conscious and emotional reaction to personal past acts and behaviors. Regret is often expressed by the term "sorry." Regret is often felt when someone feels sadness, shame, embarrassment, depression, annoyance or guilt after committing an action or actions that the person later...
such actions, for various reasons: legal, social, psychological (including feeling guilt
Guilt
Guilt is the state of being responsible for the commission of an offense. It is also a cognitive or an emotional experience that occurs when a person realizes or believes—accurately or not—that he or she has violated a moral standard, and bears significant responsibility for that...
), health, economic, etc. Temptation also describes the coaxing or inducing a person into committing such an act, by manipulation
Psychological manipulation
Psychological manipulation is a type of social influence that aims to change the perception or behavior of others through underhanded, deceptive, or even abusive tactics. By advancing the interests of the manipulator, often at the other's expense, such methods could be considered exploitative,...
or otherwise of curiosity
Curiosity
Curiosity is an emotion related to natural inquisitive behavior such as exploration, investigation, and learning, evident by observation in human and many animal species. The term can also be used to denote the behavior itself being caused by the emotion of curiosity...
, desire or fear of loss.

Though at present used in many non-religious connotations, the term has implications deeply rooted in Judaism
Judaism
Judaism ) is the "religion, philosophy, and way of life" of the Jewish people...
and the The Old Testament, starting with the story of Eve
Eve (Bible)
Eve was, according to the creation of Abrahamic religions, the first woman created by God...
and the original sin
Original sin
Original sin is, according to a Christian theological doctrine, humanity's state of sin resulting from the Fall of Man. This condition has been characterized in many ways, ranging from something as insignificant as a slight deficiency, or a tendency toward sin yet without collective guilt, referred...
. Many non-Western cultures had no precise equivalent until coming into contact with Europeans; for example, Jesuit missionaries in Brazil
Brazil
Brazil , officially the Federative Republic of Brazil , is the largest country in South America. It is the world's fifth largest country, both by geographical area and by population with over 192 million people...
, translating the Lord's Prayer
Lord's Prayer
The Lord's Prayer is a central prayer in Christianity. In the New Testament of the Christian Bible, it appears in two forms: in the Gospel of Matthew as part of the discourse on ostentation in the Sermon on the Mount, and in the Gospel of Luke, which records Jesus being approached by "one of his...
into Old Tupi, had to use the Portuguese
Portuguese language
Portuguese is a Romance language that arose in the medieval Kingdom of Galicia, nowadays Galicia and Northern Portugal. The southern part of the Kingdom of Galicia became independent as the County of Portugal in 1095...
word tentação, since Tupi had no word expressing "temptation" in that sense (see Old Tupi language#Sample text).