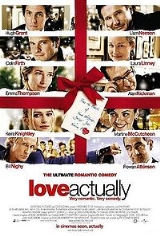 Overview
Love Actually is a 2003 British romantic comedy film
Romantic comedy film
Romantic comedy films are films with light-hearted, humorous plotlines, centered on romantic ideals such as that true love is able to surmount most obstacles. One dictionary definition is "a funny movie, play, or television program about a love story that ends happily"...
written and directed by Richard Curtis
Richard Curtis
Richard Whalley Anthony Curtis, CBE is a New Zealand-born British screenwriter, music producer, actor and film director, known primarily for romantic comedy films such as Four Weddings and a Funeral, Bridget Jones's Diary, Notting Hill, Love Actually and The Girl in the Café, as well as the hit...
. The screenplay delves into different aspects of love as shown through ten separate stories involving a wide variety of individuals, many of whom are shown to be interlinked as their tales progress. The ensemble cast
Ensemble cast
An ensemble cast is made up of cast members in which the principal actors and performers are assigned roughly equal amounts of importance and screen time in a dramatic production. This kind of casting became more popular in television series because it allows flexibility for writers to focus on...
is composed predominantly of British actors.

Set in London, the film begins five weeks before Christmas and is played out in a weekly countdown until the holiday, followed by an epilogue
Epilogue
An epilogue, epilog or afterword is a piece of writing at the end of a work of literature or drama, usually used to bring closure to the work...
that takes place one month later.
The film begins with a voiceover from David (Hugh Grant
Hugh Grant
Hugh John Mungo Grant is an English actor and film producer. He has received a Golden Globe Award, a BAFTA, and an Honorary César. His films have earned more than $2.4 billion from 25 theatrical releases worldwide. Grant achieved international stardom after appearing in Richard Curtis's...
) commenting that whenever he gets gloomy with the state of the world he thinks about the arrivals terminal at Heathrow Airport, and the pure uncomplicated love felt as friends and families welcome their arriving loved ones.

All You Need Is Love

It's All About Love... Actually.