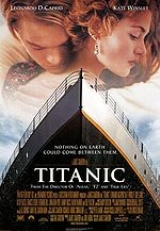 Overview
Titanic is a 1997 American epic
Epic film
An epic is a genre of film that emphasizes human drama on a grand scale. Epics are more ambitious in scope than other film genres, and their ambitious nature helps to differentiate them from similar genres such as the period piece or adventure film...
romance
Romance film
Romance films are love stories that focus on passion, emotion, and the affectionate involvement of the main characters and the journey that their love takes through courtship or marriage. Romance films make the love story or the search for love the main plot focus...
and disaster film
Disaster film
A disaster film is a film genre that has an impending or ongoing disaster as its subject...
directed, written, co-produced, and co-edited by James Cameron
James Cameron
James Francis Cameron is a Canadian-American film director, film producer, screenwriter, editor, environmentalist and inventor...
. A fictionalized account of the sinking of the RMS Titanic, it stars Leonardo DiCaprio
Leonardo DiCaprio
Leonardo Wilhelm DiCaprio is an American actor and film producer. He has received many awards, including a Golden Globe Award for Best Actor for his performance in The Aviator , and has been nominated by the Academy Awards, Screen Actors Guild and the British Academy of Film and Television...
as Jack Dawson, Kate Winslet
Kate Winslet
Kate Elizabeth Winslet is an English actress and occasional singer. She has received multiple awards and nominations. She was the youngest person to accrue six Academy Award nominations, and won the Academy Award for Best Actress for The Reader...
as Rose DeWitt Bukater and Billy Zane
Billy Zane
William George "Billy" Zane, Jr. is an American actor, producer and director. He is probably best known for his roles as Caledon Hockley in Titanic, The Phantom from The Phantom, John Wheeler in Twin Peaks and Mr...
as Rose's fiancé, Cal Hockley. Jack and Rose are members of different social classes who fall in love aboard the ship during its ill-fated maiden voyage.

Cameron's inspiration for the film was predicated on his fascination with shipwrecks; he wanted to convey the emotional message of the tragedy, and felt that a love story interspersed with the human loss would be essential to achieving this.

What is the song played after Jack wins his hand in poker??