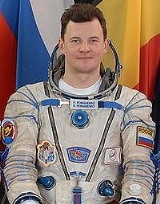 Encyclopedia
Roman Yurievich Romanenko (Major, Russian Air Force) ' onMouseout='HidePop("9371")' href="/topics/Shchyolkovo">Shchyolkovo
Shchyolkovo
Shchyolkovo is a city and the administrative center of Shchyolskovsky District in Moscow Oblast, Russia, located on the Klyazma River , northeast of Moscow. Population: 112,865 ; 109,255 ; 91,000 . The settlement dates back to the 16th century. Town status granted to it in 1925...
, near Moscow
Moscow
Moscow is the capital, the most populous city, and the most populous federal subject of Russia. The city is a major political, economic, cultural, scientific, religious, financial, educational, and transportation centre of Russia and the continent...
) is a cosmonaut at the Yu.A. Gagarin Cosmonaut Training Center.

His parents, Yuri Victorovich Romanenko
Yuri Romanenko
Yury Viktorovich Romanenko is a former Soviet cosmonaut, twice Hero of the Soviet Union . Over his career, Yury Romanenko spent a total of 430 days 20 hours 21 minutes 30 seconds in space and 18 hours in space walks. In 1987 he was a resident of the Mir space station, launching on Soyuz TM-2 and...
and Aleftina Ivanovna Romanenko, live in Star City
Star City, Russia
Star City is a common name of an area in Moscow Oblast, Russia, which has since the 1960s been home to the Yuri Gagarin Cosmonaut Training Center...
. He is married to Yulia Leonidovna Romanenko (Danilovskaya). They have one son. His hobbies include underwater hunting, tennis, car repairs, tourism, yachting, volleyball and music.

Following graduation from pilot school Romanenko served as a second commander in the Air Force. He flew L-39 and Tu-134
Tupolev Tu-134
The Tupolev Tu-134 is a twin-engined airliner, similar to the American Douglas DC-9 and the French Sud Aviation Caravelle, and built in the Soviet Union from 1966–1984. The original version featured a glazed-nose design and, like certain other Russian airliners , it can operate from unpaved...
aircraft. Romanenko has logged over 500 hours of flight time. He is a Class 3 Air Force pilot.

Romanenko was selected as a cosmonaut candidate at the Gagarin Cosmonaut Training Center Cosmonaut Office in December 1997. From January 1998 to November 1999 he undertook his basic training course. In November 1999 he was qualified as a Test Cosmonaut.

On May 27, 2009, Romanenko was launched into space as the commander of the Soyuz TMA-15
Soyuz TMA-15
Soyuz TMA-15 was a manned spaceflight to the International Space Station. Part of the Soyuz programme, it transported three members of the Expedition 20 crew to the space station. TMA-15 was the 102nd manned flight of a Soyuz spacecraft, since Soyuz 1 in 1967. The Soyuz spacecraft remain docked to...
spacecraft from Site 1/5
Gagarin's Start
Gagarin's Start is a launch site at Baikonur Cosmodrome in Kazakhstan, used for the Soviet space program and now managed by the Russian Federal Space Agency....
at the Baikonur Cosmodrome
Baikonur Cosmodrome
The Baikonur Cosmodrome , also called Tyuratam, is the world's first and largest operational space launch facility. It is located in the desert steppe of Kazakhstan, about east of the Aral Sea, north of the Syr Darya river, near Tyuratam railway station, at 90 meters above sea level...
in Kazakhstan
Kazakhstan
Kazakhstan , officially the Republic of Kazakhstan, is a transcontinental country in Central Asia and Eastern Europe. Ranked as the ninth largest country in the world, it is also the world's largest landlocked country; its territory of is greater than Western Europe...
. He was part of the Expedition 20
Expedition 20
Expedition 20 was the twentieth long-duration flight to the International Space Station. The expedition marked the first time a six-member crew inhabited the station...
and Expedition 21
Expedition 21
Expedition 21 was the 21st long-duration mission to the International Space Station . The expedition began on 30 September 2009, with Frank de Winne becoming the first ESA astronaut to command a space mission....
crews and was the third second-generation space traveller after Sergey Volkov and Richard Garriott
Richard Garriott
Richard Allen Garriott is a British-American video game developer and entrepreneur.He is also known as his alter egos Lord British in Ultima and General British in Tabula Rasa...
. Romanenko served as a Flight Engineer aboard the ISS during the two long duration missions.

After spending 187 days and 20 hours in space, Romanenko returned to Earth along with astronauts, Robert Thirsk
Robert Thirsk
Robert Brent "Bob" Thirsk is a Canadian engineer and physician, and a former Canadian Space Agency astronaut. He holds the Canadian records for the longest space flight and the most time spent in space .-Personal life:Thirsk is from New Westminster, British Columbia and is married to Brenda...
and Frank de Winne
Frank De Winne
Frank, Viscount De Winne is a Belgian Air Component officer and an ESA astronaut. He is Belgium's second person in space . He was the first ESA astronaut to command a space mission when he served as commander of ISS Expedition 21.-Education:De Winne graduated in 1979 from the Royal School of Cadets...
on December 1, 2009.