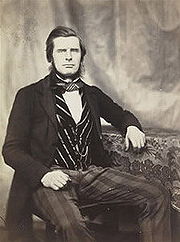 Roger Fenton was a pioneering British photographer
Photography
Photography is the art, science and practice of creating durable images by recording light or other electromagnetic radiation, either electronically by means of an image sensor or chemically by means of a light-sensitive material such as photographic film...
, one of the first war photographers
War photography
War photography captures photographs of armed conflict and life in war-torn areas.Although photographs can provide a more direct representation than paintings or drawings, they are sometimes manipulated, creating an image that is not objectively journalistic.-History:Photography, presented to the...
.

Roger Fenton was born in Crimble Hall, Heap, Bury, Lancashire, 28 March 1819. His grandfather was a wealthy cotton manufacturer and banker, his father a banker and Member of Parliament
Member of Parliament
A Member of Parliament is a representative of the voters to a :parliament. In many countries with bicameral parliaments, the term applies specifically to members of the lower house, as upper houses often have a different title, such as senate, and thus also have different titles for its members,...
. Fenton was the fourth of seven children by his father's first marriage. His father had 10 more children by his second wife.

In 1838 Fenton went to University College London
University College London
University College London is a public research university located in London, United Kingdom and the oldest and largest constituent college of the federal University of London...
where he graduated in 1840 with a "first class" Bachelor of Arts degree, having studied English, mathematics, Greek and Latin. In 1841, he began to study law at University College, evidently sporadically as he did not qualify as a solicitor until 1847, in part because he had become interested in studying to be a painter. In Yorkshire in 1843 Fenton married Grace Elizabeth Maynard, presumably after his first sojourn in Paris (his passport was issued in 1842) where he may briefly have studied painting in the studio of Paul Delaroche. When he registered as a copyist in the Louvre
Louvre
The Musée du Louvre – in English, the Louvre Museum or simply the Louvre – is one of the world's largest museums, the most visited art museum in the world and a historic monument. A central landmark of Paris, it is located on the Right Bank of the Seine in the 1st arrondissement...
in 1844 he named his teacher as the history and portrait painter Michel Martin Drolling
Michel Martin Drolling
Michel Martin Drolling was a neoclassic French painter , painter of history and portraitist.-Biographie:He was born in Paris. There he began painting under the supervision of his father, the painter Martin Drolling, then after 1806 he studied with Jacques Louis David. For his Colère of Achilles...
, who taught at the Ecole des Beaux-Arts
École des Beaux-Arts
École des Beaux-Arts refers to a number of influential art schools in France. The most famous is the École nationale supérieure des Beaux-Arts, now located on the left bank in Paris, across the Seine from the Louvre, in the 6th arrondissement. The school has a history spanning more than 350 years,...
, but Fenton's name does not appear in the records of that school. By 1847 Fenton had returned to London where he continued to study painting under the tutelage of the history painter Charles Lucy
Charles Lucy
Charles Lucy was an English historical painter of the Victorian era.Lucy was born at Norton Canon, Herefordshire. He was descended from the Lucys of Charlecote, Warwickshire...
, who became his friend and with whom, starting in 1850, he served on the board of the North London School of Drawing and Modelling. In 1849, 1850, and 1851 he exhibited paintings in the annual exhibitions of the Royal Academy
Royal Academy
The Royal Academy of Arts is an art institution based in Burlington House on Piccadilly, London. The Royal Academy of Arts has a unique position in being an independent, privately funded institution led by eminent artists and architects whose purpose is to promote the creation, enjoyment and...
.

Fenton visited the Great Exhibition in Hyde Park in London in 1851 and was impressed by the photography on display there. He then visited Paris to learn the waxed paper calotype
Calotype
Calotype or talbotype is an early photographic process introduced in 1841 by William Henry Fox Talbot, using paper coated with silver iodide. The term calotype comes from the Greek for 'beautiful', and for 'impression'....
process, most likely from Gustave Le Gray
Gustave Le Gray
Jean-Baptiste Gustave Le Gray has been called "the most important French photographer of the nineteenth century" because of his technical innovations in the still new medium of photography, his role as the teacher of other noted photographers, and the extraordinary imagination he brought to picture...
, its inventor. By 1852 he had photographs exhibited in England, and travelled to Kiev
Kiev
Kiev or Kyiv is the capital and the largest city of Ukraine, located in the north central part of the country on the Dnieper River. The population as of the 2001 census was 2,611,300. However, higher numbers have been cited in the press....
, Moscow and St. Petersburg
Saint Petersburg
Saint Petersburg is a city and a federal subject of Russia located on the Neva River at the head of the Gulf of Finland on the Baltic Sea...
making calotypes there, and photographed views and architecture around Britain. His published call for the setting up of a photographic society was answered with its establishment in 1853; the Photographic Society, with Fenton as founder and first Secretary, later became the Royal Photographic Society
Royal Photographic Society
The Royal Photographic Society is the world's oldest national photographic society. It was founded in London, United Kingdom in 1853 as The Photographic Society of London with the objective of promoting the Art and Science of Photography...
under the patronage
Patronage
Patronage is the support, encouragement, privilege, or financial aid that an organization or individual bestows to another. In the history of art, arts patronage refers to the support that kings or popes have provided to musicians, painters, and sculptors...
of Prince Albert
Prince Albert
Prince Albert was the husband and consort of Queen Victoria.Prince Albert may also refer to:-Royalty:*Prince Albert Edward or Edward VII of the United Kingdom , son of Albert and Victoria...
. 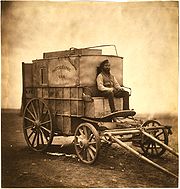 Due to the size and cumbersome nature of his photographic equipment, Fenton was limited in his choice of motifs. And because the photographic material of his time needed long exposures, he was only able to produce pictures of unmoving objects, mostly posed pictures. But he also photographed the landscape, including an area near to where the Light Brigade
Light Brigade
Light Brigade is a term made famous by the Charge of the Light Brigade, but is also used in various military contexts:* A Light infantry brigade* A Light cavalry brigade* A brigade within the Light Division...
- made famous in Tennyson
Alfred Tennyson, 1st Baron Tennyson
Alfred Tennyson, 1st Baron Tennyson, FRS was Poet Laureate of the United Kingdom during much of Queen Victoria's reign and remains one of the most popular poets in the English language....
's "Charge of the Light Brigade
The Charge of the Light Brigade (poem)
"The Charge of the Light Brigade" is an 1854 narrative poem by Alfred, Lord Tennyson about the Charge of the Light Brigade at the Battle of Balaclava during the Crimean War...
" - was ambushed, called The Valley of Death; however, Fenton's photographs were taken in the similarly named The Valley of the Shadow of Death. Modern photographers consider this picture, taken while under fire, to be a seminal piece of war photography. Two pictures were taken of this area, one with several cannonballs on the road, the other with an empty road. Opinions differ concerning which one was taken first. Filmmaker Errol Morris
Errol Morris
Errol Mark Morris is an American director. In 2003, The Guardian put him seventh in its list of the world's 40 best directors. Also in 2003, his film The Fog of War: Eleven Lessons from the Life of Robert S. McNamara won the Academy Award for Best Documentary Feature.-Early life and...
wrote a series of essays canvassing the evidence and concluded that the photo without the cannonballs was taken first, but he remained uncertain about who moved the balls onto the road in the second picture - were they deliberately placed on the road by Fenton to enhance the image, or were soldiers in the process of removing them for reuse?

In 1858 Fenton made studio genre studies based on romantically imaginative ideas of Muslim
Muslim
A Muslim, also spelled Moslem, is an adherent of Islam, a monotheistic, Abrahamic religion based on the Quran, which Muslims consider the verbatim word of God as revealed to prophet Muhammad. "Muslim" is the Arabic term for "submitter" .Muslims believe that God is one and incomparable...
life, such as Seated Odalisque, using friends and models who were not always convincing in their roles. Although well known for his Crimean War photography, his photographic career lasted little more than a decade, and in 1862 he abandoned the profession entirely, selling his equipment and becoming almost forgotten by the time of his death seven years later. He was later formally recognised by art historians for his pioneering work and artistic endeavour.

In recognition of the importance of his photography, Fenton's photos of the Crimean war were included in the Life
Life (magazine)
Life generally refers to three American magazines:*A humor and general interest magazine published from 1883 to 1936. Time founder Henry Luce bought the magazine in 1936 solely so that he could acquire the rights to its name....
collection, 100 Photos that Changed the World
100 Photos that Changed the World
Life: 100 Photographs that Changed The World is a book of photographs accumulated by the editors of Life in 2003.-History:...
.