Encyclopedia
The Rock of Cashel also known as Cashel of the Kings and St. Patrick's Rock, is a historic site in Ireland
Ireland
Ireland is an island to the northwest of continental Europe. It is the third-largest island in Europe and the twentieth-largest island on Earth...
's province
Provinces of Ireland
Ireland has historically been divided into four provinces: Leinster, Ulster, Munster and Connacht. The Irish word for this territorial division, cúige, literally meaning "fifth part", indicates that there were once five; the fifth province, Meath, was incorporated into Leinster, with parts going to...
of Munster
Munster
Munster is one of the Provinces of Ireland situated in the south of Ireland. In Ancient Ireland, it was one of the fifths ruled by a "king of over-kings" . Following the Norman invasion of Ireland, the ancient kingdoms were shired into a number of counties for administrative and judicial purposes...
, located at Cashel, South Tipperary
South Tipperary
South Tipperary is a county in Ireland. It is part of the South-East Region and is also located in the province of Munster. It is named after the town of Tipperary and consists of 52% of the land area of the traditional county of Tipperary. The county was established in 1898 and has had a county...
.

The Rock of Cashel was the traditional seat of the kings of Munster
Kings of Munster
The name Munster is derived from the Gaelic God, Muman. The province of Munster was once divided into six regions: Tuadh Mhuman , Des Mhuman , Aur/Ur Mumhan , Iar mumhan or Iarmuman , Ernaibh Muman , and Deisi Muman...
for several hundred years prior to the Norman invasion
Norman Invasion of Ireland
The Norman invasion of Ireland was a two-stage process, which began on 1 May 1169 when a force of loosely associated Norman knights landed near Bannow, County Wexford...
. Few remnants of the early structures survive; the majority of buildings on the current site date from the 12th and 13th centuries. Cashel is reputed to be the site of the conversion of the King of Munster by St. Patrick in the 5th century. The picturesque complex has a character of its own and is one of the most remarkable collections of Celtic art
Celtic art
Celtic art is the art associated with the peoples known as Celts; those who spoke the Celtic languages in Europe from pre-history through to the modern period, as well as the art of ancient peoples whose language is uncertain, but have cultural and stylistic similarities with speakers of Celtic...
and medieval architecture
Medieval architecture
Medieval architecture is a term used to represent various forms of architecture common in Medieval Europe.-Characteristics:-Religious architecture:...
to be found anywhere in Europe.

According to local mythology, the Rock of Cashel originated in the Devil's Bit
Devil's Bit
The Devil's Bit is a mountain in North Tipperary, Ireland which is 478m above sea level at its highest elevation. It lies to the north-west of the town of Templemore. The mountain is usually ascended via the village of Barnane...
, a mountain 20 miles(30 km) north of Cashel when St. Patrick banished Satan
Satan
Satan , "the opposer", is the title of various entities, both human and divine, who challenge the faith of humans in the Hebrew Bible...
from a cave, resulting in the Rock's landing in Cashel
Cashel, County Tipperary
Cashel is a town in South Tipperary in Ireland. Its population was 2936 at the 2006 census. The town gives its name to the ecclesiastical province of Cashel. Additionally, the cathedra of the Roman Catholic Archdiocese of Cashel and Emly was originally in the town prior to the English Reformation....
.


Buildings on the Rock 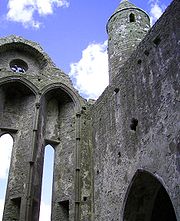 The oldest and tallest of the buildings is the well preserved round tower
Irish round tower
Irish round towers , Cloigthithe – literally "bell house") are early medieval stone towers of a type found mainly in Ireland, with three in Scotland and one on the Isle of Man...
(28 metres, or 90 feet), which dates from c.1100. Its entrance is 12 feet from the ground, necessitated by a shallow foundation (about 3 feet) typical of round towers. The tower was built using the dry stone
Dry stone
Dry stone is a building method by which structures are constructed from stones without any mortar to bind them together. Dry stone structures are stable because of their unique construction method, which is characterized by the presence of a load-bearing facade of carefully selected interlocking...
method. Modern conservationists have filled in some of the tower with mortar for safety reasons.
Cormac's Chapel, the chapel of King Cormac Mac Carthaigh, was begun in 1127 and consecrated in 1134. It is a very sophisticated structure, unlike most Irish Romanesque
Romanesque architecture
Romanesque architecture is an architectural style of Medieval Europe characterised by semi-circular arches. There is no consensus for the beginning date of the Romanesque architecture, with proposals ranging from the 6th to the 10th century. It developed in the 12th century into the Gothic style,...
churches, which are ordinarily simple in plan with isolated decorated features. The Abbot
Abbot
The word abbot, meaning father, is a title given to the head of a monastery in various traditions, including Christianity. The office may also be given as an honorary title to a clergyman who is not actually the head of a monastery...
of Regensburg
Scots Monastery, Regensburg
The Scots Monastery is a Benedictine abbey of St James in Regensburg, Germany. It was founded by Hiberno-Scottish missionaries and for most of its history was in the hands of first Irish, then Scottish monks, whence its name The Scots Monastery is a Benedictine abbey of St James (Jakobskirche) in...
sent two of his carpenters to help in the work and the twin towers on either side of the junction of the nave
Nave
In Romanesque and Gothic Christian abbey, cathedral basilica and church architecture, the nave is the central approach to the high altar, the main body of the church. "Nave" was probably suggested by the keel shape of its vaulting...
and chancel are strongly suggestive of their Germanic influence, as this feature is otherwise unknown in Ireland. Other notable features of the building include interior and exterior arcading, a barrel-vaulted roof, a carved tympanum
Tympanum (architecture)
In architecture, a tympanum is the semi-circular or triangular decorative wall surface over an entrance, bounded by a lintel and arch. It often contains sculpture or other imagery or ornaments. Most architectural styles include this element....
over both doorways, the magnificent north doorway and chancel arch. It contains one of the best preserved Irish frescoes from this time period.

The Cathedral, built between 1235 and 1270, is an aisleless
Aisleless church
An Aisleless church is a single-nave church building that consists of a single hall-like room. While similar to the hall church, the aisleless church lacks aisles or passageways either side of the nave separated from the nave by colonnades or arcades, a row of pillars or columns...
building of cruciform
Cruciform
Cruciform means having the shape of a cross or Christian cross.- Cruciform architectural plan :This is a common description of Christian churches. In Early Christian, Byzantine and other Eastern Orthodox forms of church architecture this is more likely to mean a tetraconch plan, a Greek cross,...
plan, having a central tower and terminating westwards in a massive residential castle. The Hall of the Vicars Choral was built in the fifteenth century. The vicars choral were laymen (sometimes minor canon
Minor canon
A Minor Canon is a member of staff on the establishment of a cathedral or a collegiate church. Minor Canons are clergy and take part in the daily services but are not part of the formal Chapter. They are generally more junior clergy, who in a parish church would be serving a curacy....
s) appointed to assist in chanting the cathedral services. At Cashel there were originally eight vicars choral with their own seal
Seal (device)
A seal can be a figure impressed in wax, clay, or some other medium, or embossed on paper, with the purpose of authenticating a document ; but the term can also mean the device for making such impressions, being essentially a mould with the mirror image of the design carved in sunken- relief or...
. This was later reduced to five honorary vicars choral who appointed singing-men as their deputies, a practice which continued until 1836. The restoration of the Hall was undertaken by the Office of Public Works
Office of Public Works
The Office of Public Works is a State Agency of the Department of Finance in the Republic of Ireland...
as a project in connection with the European Architectural Heritage Year, 1975. Through it visitors now enter the site.

In 1647, during the Irish Confederate Wars
Irish Confederate Wars
This article is concerned with the military history of Ireland from 1641-53. For the political context of this conflict, see Confederate Ireland....
, Cashel was sacked
Sack of Cashel
The Sack of Cashel was a notorious atrocity which occurred in the Irish County of Tipperary in the year 1647, during the Irish Confederate Wars, part of the Wars of the Three Kingdoms...
by English Parliamentarian troops under Murrough O'Brien, 1st Earl of Inchiquin
Murrough O'Brien, 1st Earl of Inchiquin
Murrough McDermod O'Brien, 1st Earl of Inchiquin and 6th Baron Inchiquin , was known as Murchadh na dTóiteán ....
. The Irish Confederate troops there were massacred, as were the Roman Catholic clergy, including Theobald Stapleton
Theobald Stapleton
Theobald Stapleton, alias Teabóid Gallduf or Gallduff , was an Irish Roman Catholic priest born in County Tipperary, Ireland. Little is known of his career, except that he was a priest living in Flanders....
. Inchiquin's troops looted or destroyed many important religious artifacts.

In 1749 the main cathedral roof was removed by Arthur Price, Bishop of Cashel.

The entire plateau on which the buildings and graveyard lie is walled. In the grounds around the buildings an extensive graveyard includes a number of high cross
High cross
A high cross or standing cross is a free-standing Christian cross made of stone and often richly decorated. There was a unique Early Medieval tradition in Ireland and Britain of raising large sculpted stone crosses, usually outdoors...
es, such as that pictured. Scully's Cross, one of the largest and most famous high crosses on Cashel, originally constructed in 1867 to commemorate the Scully family, was destroyed in 1976 when lightning struck a metal rod that ran the length of the cross. The remains of the top of the cross now lie at the base of the cross adjacent to the rock wall.