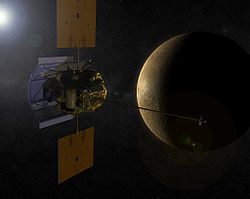 Many artificial satellite
Satellite
In the context of spaceflight, a satellite is an object which has been placed into orbit by human endeavour. Such objects are sometimes called artificial satellites to distinguish them from natural satellites such as the Moon....
s are robotic spacecraft, as are many lander
Lander (spacecraft)
A lander is a spacecraft which descends toward and comes to rest on the surface of an astronomical body. For bodies with atmospheres, the landing is called atmospheric reentry and the lander descends as a re-entry vehicle...
s and rover
Rover (space exploration)
A rover is a space exploration vehicle designed to move across the surface of a planet or other astronomical body. Some rovers have been designed to transport members of a human spaceflight crew; others have been partially or fully autonomous robots...
s.

The first space mission, Sputnik 1
Sputnik 1
Sputnik 1 ) was the first artificial satellite to be put into Earth's orbit. It was launched into an elliptical low Earth orbit by the Soviet Union on 4 October 1957. The unanticipated announcement of Sputnik 1s success precipitated the Sputnik crisis in the United States and ignited the Space...
, was an artificial satellite put into Earth orbit by the USSR on 4 October 1957. On 3 November 1957, the USSR orbited Sputnik 2
Sputnik 2
Sputnik 2 , or Prosteyshiy Sputnik 2 ), was the second spacecraft launched into Earth orbit, on November 3, 1957, and the first to carry a living animal, a dog named Laika. Sputnik 2 was a 4-meter high cone-shaped capsule with a base diameter of 2 meters...
, the first to carry a living animal into space – a dog
Laika
Laika was a Soviet space dog that became the first animal to orbit the Earth – as well as the first animal to die in orbit.As little was known about the impact of spaceflight on living creatures at the time of Laika's mission, and the technology to de-orbit had not yet been developed, there...
.

JPL divides the "flight system" of a spacecraft into subsystems. These include:

This is the physical backbone structure. It:

This is sometimes referred to as the command and data subsystem. It is often responsible for:

This system is responsible for the spacecraft's orientation in space (attitude) and the positioning of movable parts (articulation). Attitude and articulation are controlled in order to:

Components in the telecommunications subsystem include radio antennas, transmitters and receivers. These may be used to communicate with ground stations on Earth, or with other spacecraft.


Temperature control and protection from the environment

Spacecraft are often protected from temperature fluctuations with insulation. Some spacecraft use mirrors and sunshades for additional protection from solar heating. They also often need shielding from micrometeoroid
Micrometeoroid
A micrometeoroid is a tiny meteoroid; a small particle of rock in space, usually weighing less than a gram. A micrometeor or micrometeorite is such a particle that enters the Earth's atmosphere or falls to Earth.-Scientific interest:...
s and orbital debris.

Mechanical components often need to be moved for deployment after launch or prior to landing. In addition to the use of motors, many one-time movements are controlled by pyrotechnic devices.

Robotic spacecraft use telemetry
Telemetry
Telemetry is a technology that allows measurements to be made at a distance, usually via radio wave transmission and reception of the information. The word is derived from Greek roots: tele = remote, and metron = measure...
to radio back to Earth acquired data and vehicle status information. Although generally referred to as "remotely-controlled" or "telerobotic", the earliest orbital spacecraft – such as Sputnik 1 and Explorer 1 – did not receive control signals from Earth. Soon after these first spacecraft, command systems were developed to allow remote control from the ground. Increased autonomy
Autonomous robot
Autonomous robots are robots that can perform desired tasks in unstructured environments without continuous human guidance. Many kinds of robots have some degree of autonomy. Different robots can be autonomous in different ways...
is important for distant probes where the light travel time prevents rapid decision and control from Earth. Newer probes such as Cassini–Huygens and the Mars Exploration Rovers are highly autonomous and use on-board computers to operate independently for extended periods of time.

A space probe is a scientific space exploration mission in which a spacecraft leaves Earth and explores space. It may approach the Moon, enter interplanetary, flyby or orbit other bodies, or approach interstellar space.