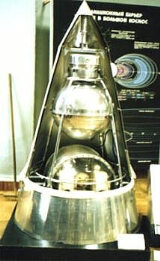 Encyclopedia
Sputnik 2 (ˈsputʲnʲək, , Satellite 2), or 'Prosteyshiy Sputnik 2 (PS-2, Elementary Satellite 2)), was the second spacecraft
Spacecraft
A spacecraft or spaceship is a craft or machine designed for spaceflight. Spacecraft are used for a variety of purposes, including communications, earth observation, meteorology, navigation, planetary exploration and transportation of humans and cargo....
launched into Earth orbit, on November 3, 1957, and the first to carry a living animal, a dog named Laika
Laika
Laika was a Soviet space dog that became the first animal to orbit the Earth – as well as the first animal to die in orbit.As little was known about the impact of spaceflight on living creatures at the time of Laika's mission, and the technology to de-orbit had not yet been developed, there...
. Sputnik 2 was a 4-meter (13 foot) high cone-shaped capsule with a base diameter of 2 meters (6.6 feet). It contained several compartments for radio transmitters, a telemetry
Telemetry
Telemetry is a technology that allows measurements to be made at a distance, usually via radio wave transmission and reception of the information. The word is derived from Greek roots: tele = remote, and metron = measure...
system, a programming unit, a regeneration and temperature control
Temperature control
Temperature control is a process in which change of temperature of a space is measured or otherwise detected, and the passage of heat energy into or out of the space is adjusted to achieve a desired average temperature....
system for the cabin, and scientific instruments. A separate sealed cabin contained the dog Laika.

Engineering and biological data
Biological data
Biological data are data or measurements collected from biological sources, which are often stored or exchanged in a digital form. Biological data are commonly stored in files or databases...
were transmitted using the Tral D telemetry system, which would transmit data to Earth for a 15 minute period during each orbit. Two photometers were on board for measuring solar radiation (ultraviolet
Ultraviolet
Ultraviolet light is electromagnetic radiation with a wavelength shorter than that of visible light, but longer than X-rays, in the range 10 nm to 400 nm, and energies from 3 eV to 124 eV...
and x-ray
X-ray
X-radiation is a form of electromagnetic radiation. X-rays have a wavelength in the range of 0.01 to 10 nanometers, corresponding to frequencies in the range 30 petahertz to 30 exahertz and energies in the range 120 eV to 120 keV. They are shorter in wavelength than UV rays and longer than gamma...
emissions) and cosmic rays. Sputnik 2 did not contain a television camera; TV
Television
Television is a telecommunication medium for transmitting and receiving moving images that can be monochrome or colored, with accompanying sound...
images of dogs on Korabl-Sputnik 2 are commonly misidentified as Laika.


Sputnik 2, known to Korolev's design bureau as""Prosteyshiy Sputnik-2" means "Simple Satellite 2," was launched into a 212 × 1660 km (132 × 1031 mi) orbit with a period of 103.7 minutes on a modified ICBM R-7, similar to the one used to launch Sputnik 1
Sputnik 1
Sputnik 1 ) was the first artificial satellite to be put into Earth's orbit. It was launched into an elliptical low Earth orbit by the Soviet Union on 4 October 1957. The unanticipated announcement of Sputnik 1s success precipitated the Sputnik crisis in the United States and ignited the Space...
. The R-7 was also known by its GURVO designation 8K71 as well as the "T-3, and M-104, and Type A. The R-7 modified for the PS-2 satellite launch was designated 8k71PS. After reaching orbit the nose cone was jettisoned successfully but the Blok A core did not separate as planned. This inhibited the operation of the thermal control system. Additionally some of the thermal insulation tore loose causing interior temperatures to reach 40 °C (104 °F). Laika survived for only a few hours instead of the planned ten days because of heat and stress. The orbit of Sputnik 2 decayed and it reentered Earth's atmosphere on 14 April 1958 after 162 days in orbit.

The first living creature (larger than a microbe) to enter orbit was a female part-Samoyed
Samoyed (dog)
The Samoyed dog takes its name from the Samoyedic peoples of Siberia. An alternate name for the breed, especially in Europe, is Bjelkier...
terrier originally named Kudryavka (Little Curly) but later renamed Laika ("Barker"). Laika was selected from ten candidates at the Air Force Institute of Aviation Medicine, because of her even temperament. She weighed about 6 kg (13 lb). The pressurized cabin on Sputnik 2 allowed enough room for her to lie down or stand and was padded. An air regeneration system provided oxygen; food and water were dispensed in a gelatinized form. Laika was fitted with a harness
Safety harness
A safety harness is a form of protective equipment designed to protect a person, animal, or object from injury or damage. The harness is an attachment between a stationary and non-stationary object and is usually fabricated from rope, cable or webbing and locking hardware...
, a bag to collect waste, and electrode
Electrode
An electrode is an electrical conductor used to make contact with a nonmetallic part of a circuit...
s to monitor vital signs. Early telemetry
Telemetry
Telemetry is a technology that allows measurements to be made at a distance, usually via radio wave transmission and reception of the information. The word is derived from Greek roots: tele = remote, and metron = measure...
indicated Laika was agitated but eating her food. In October 2002 it was revealed by Russian sources that Laika had already died after a few hours from overheating
Hyperthermia
Hyperthermia is an elevated body temperature due to failed thermoregulation. Hyperthermia occurs when the body produces or absorbs more heat than it can dissipate...
and stress
Stress (medicine)
Stress is a term in psychology and biology, borrowed from physics and engineering and first used in the biological context in the 1930s, which has in more recent decades become commonly used in popular parlance...
, not suffocation
Suffocation
Suffocation is the process of Asphyxia.Suffocation may also refer to:* Suffocation , an American death metal band* "Suffocation", a song on Morbid Angel's debut album, Altars of Madness...
, as is commonly believed. If neither had taken place, Russian Mission Control had planned to euthanize Laika with poisoned food, as she would have burned up in the atmosphere during reentry. The mission provided scientists with the first data on the behavior of a living organism in the space environment.

Sputnik 2 detected the Earth's outer radiation belt
Van Allen radiation belt
The Van Allen radiation belt is a torus of energetic charged particles around Earth, which is held in place by Earth's magnetic field. It is believed that most of the particles that form the belts come from solar wind, and other particles by cosmic rays. It is named after its discoverer, James...
in the far northern latitudes, but the significance of the elevated radiation was not realized. In Australia
Australia
Australia , officially the Commonwealth of Australia, is a country in the Southern Hemisphere comprising the mainland of the Australian continent, the island of Tasmania, and numerous smaller islands in the Indian and Pacific Oceans. It is the world's sixth-largest country by total area...
, Professor Harry Messel
Harry Messel
Harry Messel is a retired Australian physicist and educator.Messel was born in Canada of Ukrainian parents. He was brought up in Levine Siding in Manitoba and attended Queen's University, Kingston, Ontario. During the Second World War he served as a paratrooper with the Canadian Forces.Messel...
intercepted the signals but the Soviets
Soviet Union
The Soviet Union , officially the Union of Soviet Socialist Republics , was a constitutionally socialist state that existed in Eurasia between 1922 and 1991....
would not provide the code and the Australians would not send the data. In 1958, with Sputnik 3
Sputnik 3
Sputnik 3 was a Soviet satellite launched on May 15, 1958 from Baikonur cosmodrome by a modified R-7/SS-6 ICBM. It was a research satellite to explore the upper atmosphere and the near space, and carried a large array of instruments for geophysical research....
, they began to cooperate and confirmed the findings of the U.S.
United States
The United States of America is a federal constitutional republic comprising fifty states and a federal district...
satellites Explorer 1, 3
Explorer 3
Explorer 3 was an artificial satellite of the Earth, nearly identical to the first United States artificial satellite Explorer 1 in its design and mission...
, and 4
Explorer 4
Explorer 4 was a US satellite launched on July 26, 1958. It was instrumented by Dr. James van Allen's group. The Department of Defense's Advanced Research Projects Agency had initially planned two satellites for the purposes of studying the Van Allen radiation belts and the effects of nuclear...
.