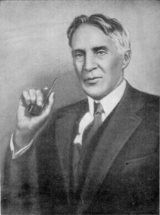 Encyclopedia
Robert Williams Wood was an American physicist and inventor. He is often cited as being a pivotal contributor to the field of optics and is best known for giving birth to the so-called "black-light effect". Wood's patents and theoretical work shed much light on the nature and physics of ultra-violet radiation and made possible the myriad of uses of uv-fluorescence which became popular after World War I
World War I
World War I , which was predominantly called the World War or the Great War from its occurrence until 1939, and the First World War or World War I thereafter, was a major war centred in Europe that began on 28 July 1914 and lasted until 11 November 1918...
.

Born in Concord, Massachusetts
Concord, Massachusetts
Concord is a town in Middlesex County, Massachusetts, in the United States. As of the 2010 census, the town population was 17,668. Although a small town, Concord is noted for its leading roles in American history and literature.-History:...
, Wood attended The Roxbury Latin School with the initial intent of becoming a priest. But he decided to study optics instead when he witnessed a rare glowing aurora
Aurora (astronomy)
An aurora is a natural light display in the sky particularly in the high latitude regions, caused by the collision of energetic charged particles with atoms in the high altitude atmosphere...
one night and believed the effect to be caused by "invisible rays". In his pursuit to find these "invisible rays", Wood studied and earned numerous degrees from Harvard, MIT and the University of Chicago
University of Chicago
The University of Chicago is a private research university in Chicago, Illinois, USA. It was founded by the American Baptist Education Society with a donation from oil magnate and philanthropist John D. Rockefeller and incorporated in 1890...
. He taught briefly at the University of Wisconsin and eventually became a full-time professor of "optical physics" at Johns Hopkins University
Johns Hopkins University
The Johns Hopkins University, commonly referred to as Johns Hopkins, JHU, or simply Hopkins, is a private research university based in Baltimore, Maryland, United States...
from 1901 until his death.

He wrote many articles on spectroscopy
Spectroscopy
Spectroscopy is the study of the interaction between matter and radiated energy. Historically, spectroscopy originated through the study of visible light dispersed according to its wavelength, e.g., by a prism. Later the concept was expanded greatly to comprise any interaction with radiative...
, phosphorescence
Phosphorescence
Phosphorescence is a specific type of photoluminescence related to fluorescence. Unlike fluorescence, a phosphorescent material does not immediately re-emit the radiation it absorbs. The slower time scales of the re-emission are associated with "forbidden" energy state transitions in quantum...
and diffraction
Diffraction
Diffraction refers to various phenomena which occur when a wave encounters an obstacle. Italian scientist Francesco Maria Grimaldi coined the word "diffraction" and was the first to record accurate observations of the phenomenon in 1665...
. He is best known for his work in ultra-violet light.

Another claim to fame was his debunking of N-rays in 1904. Visiting the discovering laboratory at the behest of the journal Nature
Nature (journal)
Nature, first published on 4 November 1869, is ranked the world's most cited interdisciplinary scientific journal by the Science Edition of the 2010 Journal Citation Reports...
, he surreptitiously removed an essential prism
Prism (optics)
In optics, a prism is a transparent optical element with flat, polished surfaces that refract light. The exact angles between the surfaces depend on the application. The traditional geometrical shape is that of a triangular prism with a triangular base and rectangular sides, and in colloquial use...
from the apparatus. The effect did not vanish, showing that it had always been self-deception.

He discovered that the darkest area of the Moon in ultraviolet
Ultraviolet
Ultraviolet light is electromagnetic radiation with a wavelength shorter than that of visible light, but longer than X-rays, in the range 10 nm to 400 nm, and energies from 3 eV to 124 eV...
light is the Aristarchus Plateau
Aristarchus (crater)
Aristarchus is a prominent lunar impact crater that lies in the northwest part of the Moon's near side. It is considered the brightest of the large formations on the lunar surface, with an albedo nearly double that of most lunar features. The feature is bright enough to be visible to the naked eye,...
. In 1909, Wood constructed the first practical liquid mirror
Liquid mirror
Liquid mirror telescopes are telescopes made with a reflective liquid. The most common liquid used is mercury, but other liquids will work as well . The container for the liquid is rotating so that the liquid assumes a paraboloidal shape. A paraboloidal shape is precisely the shape needed for the...
astronomical telescope, by spinning mercury to form a paraboloid
Paraboloid
In mathematics, a paraboloid is a quadric surface of special kind. There are two kinds of paraboloids: elliptic and hyperbolic. The elliptic paraboloid is shaped like an oval cup and can have a maximum or minimum point....
al shape, and investigated its benefits and limitations.

Wood has been described as the "father of both infrared and ultraviolet photography". Though the discovery of electromagnetic radiation
Electromagnetic radiation
Electromagnetic radiation is a form of energy that exhibits wave-like behavior as it travels through space...
beyond the visible spectrum
Visible spectrum
The visible spectrum is the portion of the electromagnetic spectrum that is visible to the human eye. Electromagnetic radiation in this range of wavelengths is called visible light or simply light. A typical human eye will respond to wavelengths from about 390 to 750 nm. In terms of...
and the development of photographic emulsions capable of recording them pre-date Wood, he was the first intentionally to produce photographs with both infrared and ultraviolet radiation. He developed a filter
Filter (optics)
Optical filters are devices which selectively transmit light of different wavelengths, usually implemented as plane glass or plastic devices in the optical path which are either dyed in the mass or have interference coatings....
, Wood's glass
Wood's glass
Wood's glass is an optical filter glass invented by American physicist Robert Williams Wood which allows ultraviolet and infrared light to pass through while blocking most visible light. It was developed as a light filter used in communications during World War I...
, that was opaque to visible light but transparent to ultraviolet and is used in modern-day black light
Black light
A black light, also referred to as a UV light, ultraviolet light, or Wood's lamp, is a lamp that emits ultraviolet radiation in the long-wave range, and little visible light...
s. He used it for ultraviolet photography but also suggested its use for secret communication. He was also the first person to photograph ultraviolet fluorescence
Fluorescence
Fluorescence is the emission of light by a substance that has absorbed light or other electromagnetic radiation of a different wavelength. It is a form of luminescence. In most cases, emitted light has a longer wavelength, and therefore lower energy, than the absorbed radiation...
. He also developed a lamp, called a Wood's lamp, that radiated only ultraviolet, which is now used in medecine, forensics, and other fields. The slightly surreal
Surrealism
Surrealism is a cultural movement that began in the early 1920s, and is best known for the visual artworks and writings of the group members....
glowing appearance of foliage in infrared photographs is called the Wood effect.
Wood also authored non-technical works. In 1915, Wood co-authored a science fiction
Science fiction
Science fiction is a genre of fiction dealing with imaginary but more or less plausible content such as future settings, futuristic science and technology, space travel, aliens, and paranormal abilities...
novel
Novel
A novel is a book of long narrative in literary prose. The genre has historical roots both in the fields of the medieval and early modern romance and in the tradition of the novella. The latter supplied the present generic term in the late 18th century....
, The Man Who Rocked the Earth, with Arthur Train
Arthur Train
Arthur Cheney Train was an American lawyer and legal thriller writer, particularly known for his novels of courtroom intrigue and the creation of the fictional lawyer Mr Ephraim Tutt.-Life:...
; a sequel, The Moon Maker, was published the next year. He also wrote and illustrated two books of children's verse, How to Tell the Birds from the Flowers (1907) and Animal Analogues (1908).

Wood married in 1892 in San Francisco, Gertrude Hooper Ames, daughter of Pelham Warren and August Wood (Hooper) Ames, and granddaughter of William Northey Hooper
William Northey Hooper
William Northey Hooper was born in Manchester, Massachusetts to the Massachusetts Hooper family of shipmasters and merchants. He founded and operated, with 2 other investors in 1835, Ladd & Co., the first large scale sugar producer in Hawaii at Koloa, marking the birth of Hawaii's leading...
, and Mass. Supreme Court judge, Hon. Seth Ames. He died in Amityville, New York
Amityville, New York
Amityville is a village in the town of Babylon in Suffolk County, New York, in the United States. The population was 9,441 at the 2000 census.-History:...
.