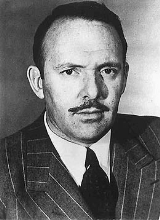 Encyclopedia
Robert Ruark was an American
United States
The United States of America is a federal constitutional republic comprising fifty states and a federal district...
author and syndicated columnist. 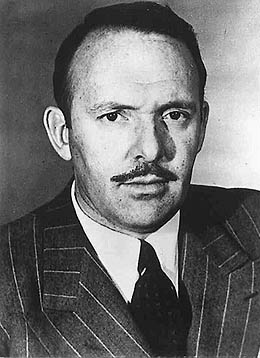 Born Robert Chester Ruark, Jr., to Charlotte A. Ruark and Robert C. Ruark, a bookkeeper for a wholesale grocery, young Ruark attended local schools and graduated from New Hanover High School
New Hanover High School
New Hanover High School is a high school located in downtown Wilmington, North Carolina. New Hanover High is now the oldest present high school built in Wilmington. Recently the original building underwent a complete renovation to update the 1919 school to the 21st century. New Hanover is also the...
in Wilmington, North Carolina. He graduated from high school at age 12 and entered the University of North Carolina at age 15. The Ruark family was deeply affected by the Depression, but despite his families' financial travails, he earned a journalism
Journalism
Journalism is the practice of investigation and reporting of events, issues and trends to a broad audience in a timely fashion. Though there are many variations of journalism, the ideal is to inform the intended audience. Along with covering organizations and institutions such as government and...
degree from the University of North Carolina at Chapel Hill
University of North Carolina at Chapel Hill
The University of North Carolina at Chapel Hill is a public research university located in Chapel Hill, North Carolina, United States...
. In the 1930s he was fired from an accounting job in the Works Progress Administration
Works Progress Administration
The Works Progress Administration was the largest and most ambitious New Deal agency, employing millions of unskilled workers to carry out public works projects, including the construction of public buildings and roads, and operated large arts, drama, media, and literacy projects...
and did a hitch in the United States Merchant Marine
United States Merchant Marine
The United States Merchant Marine refers to the fleet of U.S. civilian-owned merchant vessels, operated by either the government or the private sector, that engage in commerce or transportation of goods and services in and out of the navigable waters of the United States. The Merchant Marine is...
. Ruark worked for two small town newspapers in North Carolina
North Carolina
North Carolina is a state located in the southeastern United States. The state borders South Carolina and Georgia to the south, Tennessee to the west and Virginia to the north. North Carolina contains 100 counties. Its capital is Raleigh, and its largest city is Charlotte...
, the Hamlet News Messenger and later the Sanford Herald. Ruark had an adoptive brother named David, about whom little is known.

Upon his return to Washington, Ruark joined the Scripps-Howard Newspaper Alliance. As the New York Times said, Ruark was "sometimes glad, sometimes sad, and often mad--but almost always provocative." Some of his columns were eventually collected into two books, I Didn't Know It Was Loaded (1948) and One for the Road (1949).

As he grew in notoriety, Ruark began to write fiction; first for literary magazines, and then his first novel, Grenadine Etching in 1947
1947 in literature
The year 1947 in literature involved some significant events and new books.-Events:*The Diary of Anne Frank is published for the first time.*Jack Kerouac makes the journey which he will later chronicle in his book On the Road....
. The novel parodied the popular historical romances of the time and set the stage for his many humorous novels and articles published in the Saturday Evening Post, Esquire
Esquire (magazine)
Esquire is a men's magazine, published in the U.S. by the Hearst Corporation. Founded in 1932, it flourished during the Great Depression under the guidance of founder and editor Arnold Gingrich.-History:...
, and other popular publications.

After he began to gain success as a writer, Ruark decided that it was time to fulfill a lifelong dream to go on safari to Africa, fueled by the advice of his Doctor who advised him to have a year's rest. Legendary Ker and Downey Safaris booked him with Harry Selby, and Ruark began a love affair with Africa. It is interesting to note that Ruark was booked with Selby because of a desire to use a tracker named Kidogo, who had hunted with Ernest Hemingway
Ernest Hemingway
Ernest Miller Hemingway was an American author and journalist. His economic and understated style had a strong influence on 20th-century fiction, while his life of adventure and his public image influenced later generations. Hemingway produced most of his work between the mid-1920s and the...
on an earlier safari. Ruark's pairing with Selby, though fortuitous, was merely luck. Kidogo was a member of Selby's crew.

As a result of this first safari, Ruark wrote a book called Horn of the Hunter, in which he detailed his hunt. Selby became an overnight legend and was subsequently booked for up to five years in advance by Americans wishing to duplicate Ruark's adventures. After the first safari, Selby and Ruark again went out hunting, and this time they took cameras along. The result was a one hour documentary entitled Africa Adventure, released by RKO pictures. Though extremely difficult to find, a 16mm print of this movie was discovered in around 2002 and a DVD copy was created and donated to the Robert Ruark Foundation in Southport, North Carolina
Southport, North Carolina
Southport is a city in Brunswick County, North Carolina, near the mouth of the Cape Fear River. It is part of the Wilmington Metropolitan Statistical Area...
.
In 1953, Ruark began writing a series for Field & Stream
Field & Stream
Field & Stream is a magazine featuring hunting, fishing, and other outdoor activities in the United States. Together with Sports Afield and Outdoor Life, it is considered one of the Big Three of American outdoor publishing....
magazine entitled The Old Man and the Boy. Considered largely autobiographical (although technically fiction), this heartwarming series ran until late 1961. Many of the articles in the series were collected into a book of the same name, followed shortly thereafter by another companion book entitled The Old Man's Boy Grows Older. The stories were punctuated by the philosophical musings of the Old Man, who was a character modeled after both of Ruark's grandfathers, though based mostly on Ned Adkins, Ruark's maternal grandfather. In the stories, young Bob Ruark grows up hunting and fishing in coastal North Carolina, always guided by the Old Man. However, the pain of his parents' difficult domestic life and his relatively few childhood friends - Ruark, something of a child prodigy in school, was a loner - are tellingly absent from the stories. Today these two books are his best remembered works; his other novels are long out of print.
Twenty of Ruark's articles were republished in the book Robert Ruark's Africa.

Ruark's first bestselling novel was published in 1955. It was entitled Something of Value and was about the Mau Mau Uprising
Mau Mau Uprising
The Mau Mau Uprising was a military conflict that took place in Kenya between 1952 and 1960...
by Kenyan rebels against the British rule. The novel drew from the author's personal knowledge and experiences on safari in Africa
Africa
Africa is the world's second largest and second most populous continent, after Asia. At about 30.2 million km² including adjacent islands, it covers 6% of the Earth's total surface area and 20.4% of the total land area...
and was adapted into a successful 1957 film, Something of Value
Something of Value
Something Of Value is a 1957 drama directed by Richard Brooks and starring Rock Hudson, Dana Wynter and Sidney Poitier.-Plot:The movie, based on the book of the same name by Robert Ruark, portrays the Mau Mau uprising in Kenya. It shows the colonial and native African conflict caused by colonialism...
. Later [1962], Ruark delivered Uhuru, a continuing and similar theme, but not intended to be a sequel. "Uhuru
Uhuru
Uhuru may refer to:, a Lake Victoria ferry in East Africa*Uhuru , campaigns for and achievement of national independence in Africa especially in Kenya, Uganda and Tanzania*Uhuru Kenyatta , Kenyan politician...
" is the Swahili word for freedom. He had intended to write a final chapter in the series with the working title of A Long View From a Tall Hill, but this never materialized.

After his first half dozen books or so, Ruark continued to write, though few of his subsequent novels surpassed his early successes. Ruark moved to Sant Antoni de Calonge, Spain
Spain
Spain , officially the Kingdom of Spain languages]] under the European Charter for Regional or Minority Languages. In each of these, Spain's official name is as follows:;;;;;;), is a country and member state of the European Union located in southwestern Europe on the Iberian Peninsula...
in 1960 after a bittersweet visit to his hometown of Wilmington, North Carolina
Wilmington, North Carolina
Wilmington is a port city in and is the county seat of New Hanover County, North Carolina, United States. The population is 106,476 according to the 2010 Census, making it the eighth most populous city in the state of North Carolina...
. On leaving the U.S., he wrote (according to humorist and author Allan Sherman in his book The Rape of the A*P*E) a scathing farewell note to America, which appeared in Playboy and was titled "Nothing Works and Nobody Cares." He died in London, England on July 1, 1965 most likely as a result of alcoholism. His last novel, The Honey Badger, exemplified the personal condition of the author at this time in his life. Indeed, this book was published posthumously, as was Use Enough Gun, which is essentially a collection of segments from his earlier works. More notable are the two collections published by McIntosh and Casada, both of which are quite representative of Ruark's finest work.

Robert Ruark is buried in Palamos
Palamós
Palamós is a town and municipality in the Mediterranean Costa Brava, located in the comarca of Baix Empordà, in the province of Girona, Catalonia, Spain....
, Spain
Spain
Spain , officially the Kingdom of Spain languages]] under the European Charter for Regional or Minority Languages. In each of these, Spain's official name is as follows:;;;;;;), is a country and member state of the European Union located in southwestern Europe on the Iberian Peninsula...
.
The source of this article is wikipedia, the free encyclopedia.  The text of this article is licensed under the GFDL.