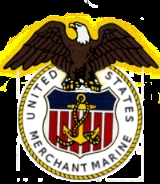 Merchant mariners move cargo and passengers between nations and within the United States, operate and maintain deep-sea merchant ships, tugboats, towboats, ferries
Ferry
A ferry is a form of transportation, usually a boat, but sometimes a ship, used to carry primarily passengers, and sometimes vehicles and cargo as well, across a body of water. Most ferries operate on regular, frequent, return services...
, dredges, excursion vessels, and other waterborne craft on the oceans, the Great Lakes
Great Lakes
The Great Lakes are a collection of freshwater lakes located in northeastern North America, on the Canada – United States border. Consisting of Lakes Superior, Michigan, Huron, Erie, and Ontario, they form the largest group of freshwater lakes on Earth by total surface, coming in second by volume...
, river
River
A river is a natural watercourse, usually freshwater, flowing towards an ocean, a lake, a sea, or another river. In a few cases, a river simply flows into the ground or dries up completely before reaching another body of water. Small rivers may also be called by several other names, including...
s, canal
Canal
Canals are man-made channels for water. There are two types of canal:#Waterways: navigable transportation canals used for carrying ships and boats shipping goods and conveying people, further subdivided into two kinds:...
s, harbor
Harbor
A harbor or harbour , or haven, is a place where ships, boats, and barges can seek shelter from stormy weather, or else are stored for future use. Harbors can be natural or artificial...
s, and other waterways.

Are we pertected from wage garnishment and if so how and were can i find it writen.
More
x