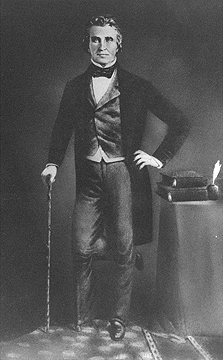 Robert McAlpin Williamson (1804? – December 22, 1859) was a Republic of Texas
Republic of Texas
The Republic of Texas was an independent nation in North America, bordering the United States and Mexico, that existed from 1836 to 1846.Formed as a break-away republic from Mexico by the Texas Revolution, the state claimed borders that encompassed an area that included all of the present U.S...
Supreme Court Justice, state lawmaker and Texas Ranger
Texas Ranger Division
The Texas Ranger Division, commonly called the Texas Rangers, is a law enforcement agency with statewide jurisdiction in Texas, and is based in Austin, Texas...
. Williamson County, Texas
Williamson County, Texas
Williamson County is a county located on both the Edwards Plateau to the west, consisting of rocky terrain and hills, and Blackland Prairies in the east consising of rich, fertile farming land, The two areas are roughly bisected by Interstate 35...
is named for him.

Williamson was born in Wilkes County, Georgia
Wilkes County, Georgia
Wilkes County is a county located in the U.S. state of Georgia. As of 2000, the population was 10,687. The 2007 Census estimate shows a population of 10,262. The county seat is the city of Washington. Referred to as "Washington-Wilkes", the county seat and county are commonly treated as a...
to a prestigious family. His mother died shortly after his birth and he was raised by his paternal grandmother, Sarah Gilliam, in Milledgeville, Georgia
Milledgeville, Georgia
Milledgeville is a city in and the county seat of Baldwin County in the U.S. state of Georgia. It is northeast of Macon, located just before Eatonton on the way to Athens along U.S. Highway 441, and it is located on the Oconee River. The relatively rapid current of the Oconee here made this an...
. At the age of fifteen, he contracted tubercular arthritis
Arthritis
Arthritis is a form of joint disorder that involves inflammation of one or more joints....
that caused his right leg to permanently stiffen at a 90 degree angle. In order to walk, a wooden leg had to be fastened to his knee. Because of this, he later acquired the nickname "Three-Legged-Willie". He passed the bar at the approximate age of nineteen before practicing one year of law in Georgia
Georgia (U.S. state)
Georgia is a state located in the southeastern United States. It was established in 1732, the last of the original Thirteen Colonies. The state is named after King George II of Great Britain. Georgia was the fourth state to ratify the United States Constitution, on January 2, 1788...
.

He was made the first Major
Major
Major is a rank of commissioned officer, with corresponding ranks existing in almost every military in the world.When used unhyphenated, in conjunction with no other indicator of rank, the term refers to the rank just senior to that of an Army captain and just below the rank of lieutenant colonel. ...
of all the Rangers on November 28, in the Texas Rangers
Texas Ranger Division
The Texas Ranger Division, commonly called the Texas Rangers, is a law enforcement agency with statewide jurisdiction in Texas, and is based in Austin, Texas...
in 1835 and went on to participate in the Texas Revolution
Texas Revolution
The Texas Revolution or Texas War of Independence was an armed conflict between Mexico and settlers in the Texas portion of the Mexican state Coahuila y Tejas. The war lasted from October 2, 1835 to April 21, 1836...
fighting in the Battle of Gonzales
Battle of Gonzales
The Battle of Gonzales was the first military engagement of the Texas Revolution. It was fought near Gonzales, Texas, on October 2, 1835, between rebellious Texian settlers and a detachment of Mexican army troops....
and the Battle of San Jacinto
Battle of San Jacinto
The Battle of San Jacinto, fought on April 21, 1836, in present-day Harris County, Texas, was the decisive battle of the Texas Revolution. Led by General Sam Houston, the Texian Army engaged and defeated General Antonio López de Santa Anna's Mexican forces in a fight that lasted just eighteen...
in William H. Smith's 2nd REG. "J" cavalry
Cavalry
Cavalry or horsemen were soldiers or warriors who fought mounted on horseback. Cavalry were historically the third oldest and the most mobile of the combat arms...
.