Encyclopedia
The Texas State Cemetery (TSC) is a cemetery
Cemetery
A cemetery is a place in which dead bodies and cremated remains are buried. The term "cemetery" implies that the land is specifically designated as a burying ground. Cemeteries in the Western world are where the final ceremonies of death are observed...
located on about 22 acres (8.9 ha) just east of downtown Austin
Austin, Texas
Austin is the capital city of the U.S. state of :Texas and the seat of Travis County. Located in Central Texas on the eastern edge of the American Southwest, it is the fourth-largest city in Texas and the 14th most populous city in the United States. It was the third-fastest-growing large city in...
, the capital of Texas
Texas
Texas is the second largest U.S. state by both area and population, and the largest state by area in the contiguous United States.The name, based on the Caddo word "Tejas" meaning "friends" or "allies", was applied by the Spanish to the Caddo themselves and to the region of their settlement in...
. Originally the burial place of Edward Burleson
Edward Burleson
Edward Burleson was a soldier, general, and statesman in the state of Missouri, the Republic of Texas, and later the U.S. state of Texas....
, Texas Revolution
Texas Revolution
The Texas Revolution or Texas War of Independence was an armed conflict between Mexico and settlers in the Texas portion of the Mexican state Coahuila y Tejas. The war lasted from October 2, 1835 to April 21, 1836...
ary general and Vice-President of the Republic of Texas
Republic of Texas
The Republic of Texas was an independent nation in North America, bordering the United States and Mexico, that existed from 1836 to 1846.Formed as a break-away republic from Mexico by the Texas Revolution, the state claimed borders that encompassed an area that included all of the present U.S...
, it was expanded into a Confederate
Confederate States of America
The Confederate States of America was a government set up from 1861 to 1865 by 11 Southern slave states of the United States of America that had declared their secession from the U.S...
cemetery during the Civil War
American Civil War
The American Civil War was a civil war fought in the United States of America. In response to the election of Abraham Lincoln as President of the United States, 11 southern slave states declared their secession from the United States and formed the Confederate States of America ; the other 25...
. Later it was expanded to include the graves of prominent Texans and their spouses.

The cemetery is divided into two sections. The smaller one contains around 900 graves of prominent Texans, while the larger has over 2,000 marked graves of Confederate veterans and widows. There is room for 7,500 interments; the cemetery is about half full; meaning, people who are eligible for burial have chosen their plots. The cemetery is not a military cemetery.

The current guidelines on who may be buried within the Texas State Cemetery were established in 1953. Persons must be one of the following:

After the death of Edward Burleson in 1851, the Texas Legislature
Texas Legislature
The Legislature of the state of Texas is the state legislature of the U.S. state of Texas. The legislature is a bicameral body composed of a 31-member Senate and a 150-member House of Representatives. The Legislature meets at the Capitol in Austin...
arranged for his burial on land formerly belonging to Andrew Jackson Hamilton. In 1854, the Legislature established a monument at Burleson's grave-site for $1,000 and purchased the surrounding land. The burial ground was virtually ignored until the Civil War, when Texas Confederate officers killed in battle were buried there. In 1864 and 1866 more land was purchased for veterans' burials. An area of 1 acres (4,046.9 m²) was also set aside for graves of Union
Union (American Civil War)
During the American Civil War, the Union was a name used to refer to the federal government of the United States, which was supported by the twenty free states and five border slave states. It was opposed by 11 southern slave states that had declared a secession to join together to form the...
veterans (all but one later removed, to Fort Sam Houston National Cemetery
Fort Sam Houston National Cemetery
Fort Sam Houston National Cemetery is a United States National Cemetery in the city of San Antonio in Bexar County, Texas. It encompasses , and as of the end of 2008, had 120,982 interments.- History :...
in San Antonio
San Antonio, Texas
San Antonio is the seventh-largest city in the United States of America and the second-largest city within the state of Texas, with a population of 1.33 million. Located in the American Southwest and the south–central part of Texas, the city serves as the seat of Bexar County. In 2011,...
). The remaining Union soldier is Antonio Briones, who was left at the request of his family. He is interred alone in the far northwest corner of the cemetery.

In 1932, the State Cemetery was little known and had no roads. There was a dirt road running through the grounds of the Cemetery linked to what was then called Onion Creek Highway. The road kept its highway status when Texas historian
Historian
A historian is a person who studies and writes about the past and is regarded as an authority on it. Historians are concerned with the continuous, methodical narrative and research of past events as relating to the human race; as well as the study of all history in time. If the individual is...
Louis Kemp brought it to the attention of the Texas Highway Department
Texas Department of Transportation
The Texas Department of Transportation is a governmental agency in the U.S. state of Texas. Its stated mission is to "work cooperatively to provide safe, effective and efficient movement of people and goods" throughout the state...
that the road running through the Cemetery should be paved. The roads, which are officially designated as State Highway 165, are dedicated to Kemp, and were for a time known as "Lou Kemp Highway". Kemp was also the driving force behind the reinterment of many early Texas figures in time for the Texas Centennial in 1936.

The cemetery was added to the National Register of Historic Places
National Register of Historic Places
The National Register of Historic Places is the United States government's official list of districts, sites, buildings, structures, and objects deemed worthy of preservation...
in 1986, but by the early 1990s, the State Cemetery had fallen into disrepair — suffering from vandalism and decay — and was unsafe to visit. In 1994, after noting the condition of the Cemetery, Lieutenant Governor
Lieutenant governor
A lieutenant governor or lieutenant-governor is a high officer of state, whose precise role and rank vary by jurisdiction, but is often the deputy or lieutenant to or ranking under a governor — a "second-in-command"...
Bob Bullock
Bob Bullock
Robert Douglas Bullock, known as Bob Bullock , was a Democratic politician from Texas, whose career spanned four decades. His service culminated in his term as Lieutenant Governor of Texas from January 15, 1991–January 19, 1999 during the terms of Governors Ann Richards and George W...
initiated a three-year project that added a visitor center and renovated the cemetery. In 1997, there was a rededication and a reopening of the State Cemetery, and it remains one of the more visited sites in Austin for schoolchildren, adults, and history enthusiasts. Tours are offered and should be scheduled in advance.

The three-person Texas State Cemetery oversees daily operations at the cemetery. Scott Sayers (appointed by Governor Rick Perry
Rick Perry
James Richard "Rick" Perry is the 47th and current Governor of Texas. A Republican, Perry was elected Lieutenant Governor of Texas in 1998 and assumed the governorship in December 2000 when then-governor George W. Bush resigned to become President of the United States. Perry was elected to full...
) is chairman. Coley Cowden (Speaker's appointment) and Borah Van Dormolen (appointee of the lieutenant governor) also serve. The cemetery superintendent is Harry Bradley. The historian is Jason Walker.

As of 2006, buried in the Texas State Cemetery are: 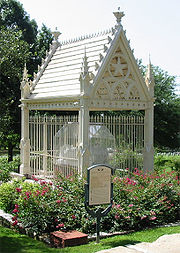