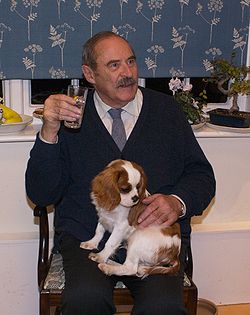 Robert Lionel Archibald Goff, Baron Goff of Chieveley PC DCL FBA is a retired British
United Kingdom
The United Kingdom of Great Britain and Northern IrelandIn the United Kingdom and Dependencies, other languages have been officially recognised as legitimate autochthonous languages under the European Charter for Regional or Minority Languages...
Judge.

Lord Goff, High Steward of the University of Oxford
University of Oxford
The University of Oxford is a university located in Oxford, United Kingdom. It is the second-oldest surviving university in the world and the oldest in the English-speaking world. Although its exact date of foundation is unclear, there is evidence of teaching as far back as 1096...
, retired in 1998 as Senior Law Lord after more than a decade as a Lord of Appeal in Ordinary
Lord of Appeal in Ordinary
Lords of Appeal in Ordinary, commonly known as Law Lords, were appointed under the Appellate Jurisdiction Act 1876 to the House of Lords of the United Kingdom in order to exercise its judicial functions, which included acting as the highest court of appeal for most domestic matters...
in the House of Lords
Judicial functions of the House of Lords
The House of Lords, in addition to having a legislative function, historically also had a judicial function. It functioned as a court of first instance for the trials of peers, for impeachment cases, and as a court of last resort within the United Kingdom. In the latter case the House's...
. Prior to being created a Law lord and receiving a life peerage as Baron Goff of Chieveley
Chieveley
Chieveley is a village and civil parish about north of Newbury in Berkshire, close to the M4 motorway and A34 road.-Character:Chieveley is a village of 1,481 people and 508 households. A map of 1877 stated the area at the time to be roughly . Chieveley Service Station serves Junction 13 of the M4...
in the County of Berkshire
Berkshire
Berkshire is a historic county in the South of England. It is also often referred to as the Royal County of Berkshire because of the presence of the royal residence of Windsor Castle in the county; this usage, which dates to the 19th century at least, was recognised by the Queen in 1957, and...
in 1986, Lord Goff studied at Eton College
Eton College
Eton College, often referred to simply as Eton, is a British independent school for boys aged 13 to 18. It was founded in 1440 by King Henry VI as "The King's College of Our Lady of Eton besides Wyndsor"....
and at New College, Oxford
New College, Oxford
New College is one of the constituent colleges of the University of Oxford in the United Kingdom.- Overview :The College's official name, College of St Mary, is the same as that of the older Oriel College; hence, it has been referred to as the "New College of St Mary", and is now almost always...
.

He served in the army and as a fellow of Lincoln College, Oxford
Lincoln College, Oxford
Lincoln College is one of the constituent colleges of the University of Oxford in the United Kingdom. It is situated on Turl Street in central Oxford, backing onto Brasenose College and adjacent to Exeter College...
, practised as a barrister
Barrister
A barrister is a member of one of the two classes of lawyer found in many common law jurisdictions with split legal professions. Barristers specialise in courtroom advocacy, drafting legal pleadings and giving expert legal opinions...
and Queen's Counsel
Queen's Counsel
Queen's Counsel , known as King's Counsel during the reign of a male sovereign, are lawyers appointed by letters patent to be one of Her [or His] Majesty's Counsel learned in the law...
, and was appointed to the High Court in 1975 and to the Court of Appeal in 1982. Lord Goff, co-author of Goff & Jones, The Law of Restitution, is the acknowledged father of English restitution
Restitution
The law of restitution is the law of gains-based recovery. It is to be contrasted with the law of compensation, which is the law of loss-based recovery. Obligations to make restitution and obligations to pay compensation are each a type of legal response to events in the real world. When a court...
law, and has served on many important cases in the House of Lords