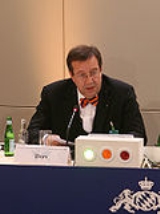 Encyclopedia
The President of the Republic is the head of state
Head of State
A head of state is the individual that serves as the chief public representative of a monarchy, republic, federation, commonwealth or other kind of state. His or her role generally includes legitimizing the state and exercising the political powers, functions, and duties granted to the head of...
of the Republic of Estonia
Estonia
Estonia , officially the Republic of Estonia , is a state in the Baltic region of Northern Europe. It is bordered to the north by the Gulf of Finland, to the west by the Baltic Sea, to the south by Latvia , and to the east by Lake Peipsi and the Russian Federation . Across the Baltic Sea lies...
.

The President is elected by the Riigikogu
Riigikogu
The Riigikogu is the unicameral parliament of Estonia. All important state-related questions pass through the Riigikogu...
or a special electoral body for a five-year term. The electoral body is convened in case no candidate secures a two-third-majority in Riigikogu after three rounds of balloting. The electoral body (which consists of Parliament deputies and elected representatives of all local governments) elects the president, choosing between the two candidates with the largest percentage of votes.

The President can not be elected for more than two consecutive terms.

Estonia didn't have a president from 1918 to 1938. This institution was intentionally left out of the first Estonian constitution, for its authors tried to avoid the concentration of power in one person's hands by all means possible. This eventually led to a creation of an ultra-parliamentary system. The power of the Parliament was practically unlimited and the Government was totally controlled by the Parliament. The functions that are usually vested on a president in parliamentary systems were divided among the speaker of Riigikogu, the State Elder and the Government. Until 1934, the nominal head of state was the State Elder
State Elder of Estonia
The Head of State of Estonia was the official title of the Estonian head of state and head of government from 1920 to 1937...
. (riigivanem), who was also head of the government. However, he could not play a balancing role, should there be any conflict between the Parliament and the Government. The State Elder was completely dependent on the Parliament and could be sacked by it at any time. Estonia's constitution was amended in 1933, transforming the country from a parliamentary to a presidential state. The head of state, according to the new constitution, was also called the State Elder. However, this provision never came into effect as a result of Konstantin Päts
Konstantin Päts
Konstantin Päts VR I/1 and III/1 was the most influential politician of interwar Estonia. He was one of the first Estonians to become active in politics and started an almost 40-year political rivalry with Jaan Tõnisson, first through journalism with his newspaper Teataja, later through politics...
's coup d'état in 1934. According to the third Constitution of Estonia, the role of the head of state and also a strong executive power was vested upon the President of the Republic. Konstantin Päts became the first person to bear this title. His term was to last for six years, but ended short as Estonia was annexed by the Soviet Union
Soviet Union
The Soviet Union , officially the Union of Soviet Socialist Republics , was a constitutionally socialist state that existed in Eurasia between 1922 and 1991....
in 1940, Päts was dismissed and later arrested.

Within days after the Soviet occupation of Estonia in 1940, the President was pressured into affirming the Andrei Zhdanov
Andrei Zhdanov
Andrei Alexandrovich Zhdanov was a Soviet politician.-Life:Zhdanov enlisted with the Russian Social Democratic Labour Party in 1915 and was promoted through the party ranks, becoming the All-Union Communist Party manager in Leningrad after the assassination of Sergei Kirov in 1934...
appointed puppet government of Johannes Vares
Johannes Vares
Johannes Vares , commonly known as Johannes Vares Barbarus, was an Estonian poet, doctor, and politician.Vares was born in Heimtali, now in Pärsti Parish, Viljandi County, and educated at Pärnu Gymnasium...
, following the arrival of demonstrators accompanied by Red Army troops with armored vehicles to the Presidential palace. Following the sham elections in July, Päts was dismissed from office and Vares assumes presidential responsibilities. Later in July Päts, along with his son, daughter-in-law and two grandsons, was deported to Ufa
Ufa
-Demographics:Nationally, dominated by Russian , Bashkirs and Tatars . In addition, numerous are Ukrainians , Chuvash , Mari , Belarusians , Mordovians , Armenian , Germans , Jews , Azeris .-Government and administration:Local...
in Russia.

According to the 1938 constitution, should the position of the President of the republic become vacant or otherwise incapacitated, the president duties are assumed by the Prime Minister. However, during times of war or incapacitation lasting longer than six months, the constitution provides for the election of an acting President by the Electoral Council. The Electoral Council met in secret on April 20, 1944, and determined that the appointment of Vares as Prime Minister in 1940 was unlawful according to the 1938 constitution. The Council elected Jüri Uluots
Jüri Uluots
Jüri Uluots was an Estonian prime minister, journalist, prominent attorney and distinguished Professor and Dean of the Faculty of Law at the University of Tartu....
as acting President of Estonia on April 21st. Uluots appointed Otto Tief
Otto Tief
Otto Tief was a lawyer, an Estonian military commander during the Estonian War of Independence and a politician. He was Acting Prime Minister of the last government of Estonia before Soviet troops occupied Estonia in 1944...
as Prime Minister. Tief was subsequently arrested by the re-occupying Soviet forces in September.

In September of 1944, Uluots and the surviving members of the Tief government escaped to Sweden. The day before Uluots died in January, 1945, a successor August Rei
August Rei
August Rei VR III/1 was an Estonian Social Democratic politician. He was born in Pilistvere, Kõo Parish, Viljandi County.- Education :...
was named to assume the position of acting President. Following Rei's death in 1963, the role passed to Aleksander Warma
Aleksander Warma
Aleksander Warma VR I/3 was an Estonian navy officer, diplomat and painter....
, then to Tõnis Kint
Tõnis Kint
Tõnis Kint was an Estonian politician. He served as "Prime Minister in duties of the President" from December 23, 1970 to March 1, 1990.From April 7, 1938 member of the Chamber of Deputies...
in 1971, then to Heinrich Mark
Heinrich Mark
Heinrich Mark was born on October 1, 1911, in Krootuse, Kõlleste Parish, now in Põlva County, Estonia. He died on August 2, 2004, in Stockholm, Sweden....
in 1990. Then in 1992 the last acting President of Estonia, Heinrich Mark, handed over his credentials to the newly elected President of the restored republic, Lennart Meri
Lennart Meri
Lennart Georg Meri was a writer, film director and statesman who served as the second President of Estonia from 1992 to 2001. Meri was a leader of the Estonian independence movement.-Early life:...
.

After Estonia regained independence, a parliamentary constitution based upon the 1938 law was adopted again. Four elections have taken place (in 1992, 1996, 2001 and 2006), in all of which the parliament failed to choose the President and the election passed to the electoral assembly. Lennart Meri
Lennart Meri
Lennart Georg Meri was a writer, film director and statesman who served as the second President of Estonia from 1992 to 2001. Meri was a leader of the Estonian independence movement.-Early life:...
was elected in 1992 (this election, unlike later ones, had a public round) and re-elected in 1996, defeating Arnold Rüütel
Arnold Rüütel
Arnold Rüütel OIH was the third President of the Republic of Estonia from October 8, 2001 to October 9, 2006. He was the second President since Estonia regained its independence in 1991....
both times. Rüütel himself became the next President in 2001. In 2006, Toomas Hendrik Ilves
Toomas Hendrik Ilves
Toomas Hendrik Ilves is the fourth and current President of Estonia. He is a former diplomat and journalist, was the leader of the Social Democratic Party in the 1990s and later a member of the European Parliament...
won the election.


Duties of the President according to Estonian Constitution

The President of the Republic of Estonia: