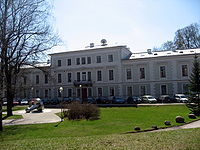 The Supreme Court of Estonia (Estonian: Riigikohus) is the court of last resort
Supreme court
A supreme court is the highest court within the hierarchy of many legal jurisdictions. Other descriptions for such courts include court of last resort, instance court, judgment court, high court, or apex court...
in Estonia
Estonia
Estonia , officially the Republic of Estonia , is a state in the Baltic region of Northern Europe. It is bordered to the north by the Gulf of Finland, to the west by the Baltic Sea, to the south by Latvia , and to the east by Lake Peipsi and the Russian Federation . Across the Baltic Sea lies...
. It is both a court of cassation
Court of cassation
A Court of Cassation is a high instance court that exists in some judicial systems. Courts of cassation are appellate courts of the highest instance. They are roughly equivalent to supreme courts in other countries...
and a constitutional court. The courthouse is in Tartu
Tartu
Tartu is the second largest city of Estonia. In contrast to Estonia's political and financial capital Tallinn, Tartu is often considered the intellectual and cultural hub, especially since it is home to Estonia's oldest and most renowned university. Situated 186 km southeast of Tallinn, the...
.
Chief justice
Chief Justice
The Chief Justice in many countries is the name for the presiding member of a Supreme Court in Commonwealth or other countries with an Anglo-Saxon justice system based on English common law, such as the Supreme Court of Canada, the Constitutional Court of South Africa, the Court of Final Appeal of...
s=
The source of this article is wikipedia, the free encyclopedia.  The text of this article is licensed under the GFDL.