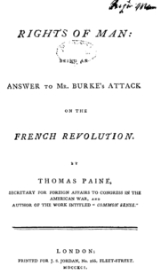 Human rights originate in Nature, thus, rights cannot be granted via political charter, because that implies that rights are legally revocable, hence, would be privileges:

It is a perversion of terms to say that a charter gives rights. It operates by a contrary effect — that of taking rights away. Rights are inherently in all the inhabitants; but charters, by annulling those rights, in the majority, leave the right, by exclusion, in the hands of a few... They... consequently are instruments of injustice.

The fact, therefore, must be that the individuals, themselves, each, in his own personal and sovereign right, entered into a compact with each other to produce a government: and this is the only mode in which governments have a right to arise, and the only principle on which they have a right to exist.

Government's sole purpose is safeguarding the family and his/her inherent, inalienable rights; each societal institution that does not benefit the nation is illegitimate — especially the Monarchy, the Nobility, and the Military. The book's acumen derives from the Age of Enlightenment
Age of Enlightenment
The Age of Enlightenment was an elite cultural movement of intellectuals in 18th century Europe that sought to mobilize the power of reason in order to reform society and advance knowledge. It promoted intellectual interchange and opposed intolerance and abuses in church and state...
, especially from the Second Treatise of Government, by John Locke
John Locke
John Locke FRS , widely known as the Father of Liberalism, was an English philosopher and physician regarded as one of the most influential of Enlightenment thinkers. Considered one of the first of the British empiricists, following the tradition of Francis Bacon, he is equally important to social...
.

Principally, Rights of Man opposes the idea of hereditary government — the belief that dictatorial government is necessary, because of man's corrupt, essential nature. In Reflections on the Revolution in France (1790) Edmund Burke says that true social stability arises if the nation's poor majority are governed by a minority of wealthy aristocrats, and that lawful inheritance of power (wealth, religious, governing) ensured the propriety of political power being the exclusive domain of the nation's élite social class — the nobility.

Thomas Paine was not the only advocate of the rights of man or the only author of a work titled Rights of Man. The working-class radical, Thomas Spence
Thomas Spence
Thomas Spence was an English Radical and advocate of the common ownership of land.-Life:Spence was born in Newcastle-on-Tyne, England and was the son of a Scottish net and shoe maker....
, is amongst the first, in England, to use the phrase as a title. His 1775 lecture, usually titled The Rights of Man, and his later The Rights of Infants, offer a proto-communist government alternative to Paine's democratic offering.