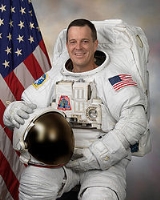 Encyclopedia
Richard Robert "Ricky" Arnold II (born November 26, 1963 in Cheverly
Cheverly, Maryland
Cheverly is a town in central Maryland, just outside Washington, D.C., United States. The town was founded in 1918 and it was incorporated in 1931. Cheverly had 6,433 residents as of the 2000 Census....
, Maryland
Maryland
Maryland is a U.S. state located in the Mid Atlantic region of the United States, bordering Virginia, West Virginia, and the District of Columbia to its south and west; Pennsylvania to its north; and Delaware to its east...
) is an American
United States
The United States of America is a federal constitutional republic comprising fifty states and a federal district...
educator and a NASA
NASA
The National Aeronautics and Space Administration is the agency of the United States government that is responsible for the nation's civilian space program and for aeronautics and aerospace research...
astronaut
Astronaut
An astronaut or cosmonaut is a person trained by a human spaceflight program to command, pilot, or serve as a crew member of a spacecraft....
. He flew on Space Shuttle mission STS-119
STS-119
-Crew notes:This mission was originally scheduled to bring the Expedition 9 crew to the ISS. This crew would have consisted of:-Mission parameters:* Mass:* Orbiter liftoff: * Orbiter landing: * Perigee: * Apogee:...
, which launched March 15, 2009 and delivered the final set of solar arrays to the International Space Station
International Space Station
The International Space Station is a habitable, artificial satellite in low Earth orbit. The ISS follows the Salyut, Almaz, Cosmos, Skylab, and Mir space stations, as the 11th space station launched, not including the Genesis I and II prototypes...
.

Arnold was raised in Bowie, Maryland and is married to Eloise Miller Arnold of Bowie. They have two daughters.

Arnold began working at the United States Naval Academy
United States Naval Academy
The United States Naval Academy is a four-year coeducational federal service academy located in Annapolis, Maryland, United States...
in 1987 as an Oceanographic Technician. Upon completing his teacher certification program, he accepted a position as a science teacher at John Hanson Middle School in Waldorf, Maryland. During his tenure, he completed a Masters program while conducting research in biostratigraphy at the Horn Point Environmental Laboratory in Cambridge, Maryland. Upon martriculation, Arnold spent another year working in the Marine Sciences including time at the Cape Cod National Seashore and aboard a sail training/oceanographic vessel headquartered in Woods Hole, Massachusetts. In 1993, Arnold joined the faculty at the Casablanca American School
Casablanca American School
Casablanca American School is a coeducational, Nursery through Grade Twelve private day school in Casablanca, Morocco.-The school:Casablanca American School was founded in 1973 and was the first school in North Africa to offer the International Baccalaureate Programme.CAS is a member of the...
in Casablanca, Morocco, teaching college preparatory Biology and Marine Environmental Science. During that time, he began presenting workshops at various international education conferences focusing on science teaching methodologies. In 1996, he and his family moved to Riyadh, Saudi Arabia, where he was employed as a middle and high school science teacher at the American International School. In 2001, Arnold was hired by International School Services to teach middle school mathematics and science at the International School of Kuala Kencana operated by PT Freeport Indonesia
Grasberg mine
The Grasberg Mine is the largest gold mine and the third largest copper mine in the world. It is located in the province of Papua in Indonesia near Puncak Jaya, the highest mountain in Papua, and it has 19,500 employees...
in West Papua
Western New Guinea
West Papua informally refers to the Indonesian western half of the island of New Guinea and other smaller islands to its west. The region is officially administered as two provinces: Papua and West Papua. The eastern half of New Guinea is Papua New Guinea.The population of approximately 3 million...
, Indonesia
Indonesia
Indonesia , officially the Republic of Indonesia , is a country in Southeast Asia and Oceania. Indonesia is an archipelago comprising approximately 13,000 islands. It has 33 provinces with over 238 million people, and is the world's fourth most populous country. Indonesia is a republic, with an...
. In 2003, he accepted a similar teaching position at the American International School of Bucharest
American International School of Bucharest
The American International School of Bucharest is a multicultural and international school located in the town of Voluntari, 5 km outside central Bucharest, Romania. It is set on a campus 10 hectares in size. English is the primary medium of instruction. The school was founded in 1962 by the...
in Bucharest
Bucharest
Bucharest is the capital municipality, cultural, industrial, and financial centre of Romania. It is the largest city in Romania, located in the southeast of the country, at , and lies on the banks of the Dâmbovița River....
, Romania
Romania
Romania is a country located at the crossroads of Central and Southeastern Europe, on the Lower Danube, within and outside the Carpathian arch, bordering on the Black Sea...
.

Arnold was the guest of honor at the Bowie High School Class of 2009 graduation, delivering the commencement speech.

Arnold was selected as a Mission Specialist-Educator by NASA in May 2004. In February 2006 he completed Astronaut Candidate Training that included scientific and technical briefings, intensive instruction in Shuttle and International Space Station systems, physiological training, T-38
T-38
The T-38 amphibious scout tank was a Soviet amphibious light tank that saw service in World War II.-History:Designed in 1934–36 by N. Astrov's bureau at Factory No. 37 in Moscow, the T-38 was a development of the earlier T-37, based in turn on the French AMR 33 light reconnaissance tank. The tank...
flight training, and water and wilderness survival training. Upon completion of his training, Arnold was assigned to the Hardware Integration Team in the Space Station Branch working on technical issues with JAXA hardware. He worked on various technical assignments until he was assigned to the STS-119
STS-119
-Crew notes:This mission was originally scheduled to bring the Expedition 9 crew to the ISS. This crew would have consisted of:-Mission parameters:* Mass:* Orbiter liftoff: * Orbiter landing: * Perigee: * Apogee:...
spaceflight.

In August 2007, Arnold served as an aquanaut
Aquanaut
An Aquanaut is any individual who remains underwater, exposed to the ambient pressure, long enough to come into equilibrium with his or her breathing media. Usually this is done in an underwater habitat on the seafloor for a period equal to or greater than 24 continuous hours without returning to...
during the NEEMO 13 project, an exploration research mission held in Aquarius
Aquarius (laboratory)
The NOAA Aquarius Reef Base is an underwater habitat located in the Florida Keys National Marine Sanctuary, adjacent to Conch Reef. It is one of the few underwater research facilities in the world dedicated to science...
, the world's only undersea research laboratory
Underwater habitat
Underwater habitats are underwater structures in which people can live for extended periods and carry out most of the basic human functions of a 24-hour day, such as working, resting, eating, attending to personal hygiene, and sleeping...
. On September 19, 2011, NASA
NASA
The National Aeronautics and Space Administration is the agency of the United States government that is responsible for the nation's civilian space program and for aeronautics and aerospace research...
announced that Arnold would participate in the NEEMO 15 mission in October 2011 from the DeepWorker submersible
Submersible
A submersible is a small vehicle designed to operate underwater. The term submersible is often used to differentiate from other underwater vehicles known as submarines, in that a submarine is a fully autonomous craft, capable of renewing its own power and breathing air, whereas a submersible is...
. The DeepWorker is a small submarine
Submarine
A submarine is a watercraft capable of independent operation below the surface of the water. It differs from a submersible, which has more limited underwater capability...
used as an underwater stand-in for the Space Exploration Vehicle, which might someday be used to explore the surface of an asteroid
Asteroid
Asteroids are a class of small Solar System bodies in orbit around the Sun. They have also been called planetoids, especially the larger ones...
.