Encyclopedia
Rho is the 17th letter of the Greek alphabet
Greek alphabet
The Greek alphabet is the script that has been used to write the Greek language since at least 730 BC . The alphabet in its classical and modern form consists of 24 letters ordered in sequence from alpha to omega...
. In the system of Greek numerals
Greek numerals
Greek numerals are a system of representing numbers using letters of the Greek alphabet. They are also known by the names Ionian numerals, Milesian numerals , Alexandrian numerals, or alphabetic numerals...
, it has a value of 100. It is derived from Semitic
Semitic
In linguistics and ethnology, Semitic was first used to refer to a language family of largely Middle Eastern origin, now called the Semitic languages...
resh
Resh
Resh is the twentieth letter of many Semitic alphabets, including Phoenician, Aramaic, Hebrew and Arabic alphabet . Its sound value is one of a number of rhotic consonants: usually or , but also or in Hebrew....
"head". Its uppercase form is not to be confused with the Latin
Latin alphabet
The Latin alphabet, also called the Roman alphabet, is the most recognized alphabet used in the world today. It evolved from a western variety of the Greek alphabet called the Cumaean alphabet, which was adopted and modified by the Etruscans who ruled early Rome...
letter P
P
P is the sixteenth letter of the basic modern Latin alphabet.-Usage:In English and most other European languages, P is a voiceless bilabial plosive. Both initial and final Ps can be combined with many other discrete consonants in English words...
, although both are typeset using the same glyph
Glyph
A glyph is an element of writing: an individual mark on a written medium that contributes to the meaning of what is written. A glyph is made up of one or more graphemes....
. 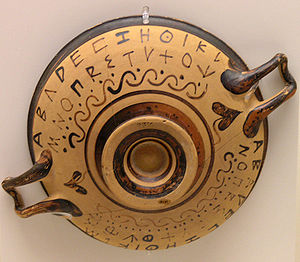 Rho is classed as a liquid consonant
Liquid consonant
In phonetics, liquids or liquid consonants are a class of consonants consisting of lateral consonants together with rhotics.-Description:...
(together with lambda and sometimes the nasals mu
Mu (letter)
Carlos Alberto Vives Restrepo is a Grammy Award and three-time Latin Grammy Award winning-Colombian singer, composer and actor.-Biography:...
and nu
Nu (letter)
Nu , is the 13th letter of the Greek alphabet. In the system of Greek numerals it has a value of 50...
), which has important implications for morphology
Morphology (linguistics)
In linguistics, morphology is the identification, analysis and description, in a language, of the structure of morphemes and other linguistic units, such as words, affixes, parts of speech, intonation/stress, or implied context...
. In both Ancient
Ancient Greek
Ancient Greek is the stage of the Greek language in the periods spanning the times c. 9th–6th centuries BC, , c. 5th–4th centuries BC , and the c. 3rd century BC – 6th century AD of ancient Greece and the ancient world; being predated in the 2nd millennium BC by Mycenaean Greek...
and Modern Greek
Modern Greek
Modern Greek refers to the varieties of the Greek language spoken in the modern era. The beginning of the "modern" period of the language is often symbolically assigned to the fall of the Byzantine Empire in 1453, even though that date marks no clear linguistic boundary and many characteristic...
, it represents a trilled
Alveolar trill
The alveolar trill is a type of consonantal sound, used in some spoken languages. The symbol in the International Phonetic Alphabet that represents dental, alveolar, and postalveolar trills is , and the equivalent X-SAMPA symbol is r. It is commonly called the rolled R, rolling R, or trilled R...
or tapped r.

In polytonic orthography a rho at the beginning of a word is written with a rough breathing (equivalent to h) — rh — and a double
Gemination
In phonetics, gemination happens when a spoken consonant is pronounced for an audibly longer period of time than a short consonant. Gemination is distinct from stress and may appear independently of it....
rho within a word is written with a smooth breathing over the first rho and a rough breathing over the second — rrh — apparently reflecting an aspirated
Aspiration
Aspiration may refer to:In linguistics:*Aspirated consonant, a plosive pronounced with a strong burst of air*Debuccalization, the conversion of a consonant to [h] or [ʔ]*Voiceless glottal fricative In engine technology:...
or voiceless
Voiceless
In linguistics, voicelessness is the property of sounds being pronounced without the larynx vibrating. Phonologically, this is a type of phonation, which contrasts with other states of the larynx, but some object that the word "phonation" implies voicing, and that voicelessness is the lack of...
pronunciation in Ancient Greek
Ancient Greek
Ancient Greek is the stage of the Greek language in the periods spanning the times c. 9th–6th centuries BC, , c. 5th–4th centuries BC , and the c. 3rd century BC – 6th century AD of ancient Greece and the ancient world; being predated in the 2nd millennium BC by Mycenaean Greek...
, hence the various Greek-derived English words which start with rh or contain rrh.

The name of the letter is written in Greek as (polytonic) or ρω/ρο (monotonic).

Letters that arose from rho include Roman R
R
R is the eighteenth letter of the basic modern Latin alphabet.-History:The original Semitic letter may have been inspired by an Egyptian hieroglyph for tp, "head". It was used for by Semites because in their language, the word for "head" was rêš . It developed into Greek Ρ and Latin R...
and Cyrillic Er
Er (Cyrillic)
Er is a letter of the Cyrillic alphabet.It commonly represents the alveolar trill , like the "rolled" sound in the Scottish pronunciation of ⟨r⟩ in "curd".-History:...
(Р).

The characters Ρ, ρ and are also used outside its Greek alphabetical context in science
Science
Science is a systematic enterprise that builds and organizes knowledge in the form of testable explanations and predictions about the universe...
and mathematics
Mathematics
Mathematics is the study of quantity, space, structure, and change. Mathematicians seek out patterns and formulate new conjectures. Mathematicians resolve the truth or falsity of conjectures by mathematical proofs, which are arguments sufficient to convince other mathematicians of their validity...
.

The letter rho overlaid with chi
Chi (letter)
Chi is the 22nd letter of the Greek alphabet, pronounced as in English.-Greek:-Ancient Greek:Its value in Ancient Greek was an aspirated velar stop .-Koine Greek:...
forms the Chi Rho
Chi Rho
The Chi Rho is one of the earliest forms of christogram, and is used by Christians. It is formed by superimposing the first two letters chi and rho of the Greek word "ΧΡΙΣΤΟΣ" =Christ in such a way to produce the monogram ☧...
symbol, used to represent Jesus Christ.

Former Rhodes Scholars are entitled to use the Greek letter rho as a designation of their status. When used, the symbol should precede the name.