Encyclopedia
A glyph is an element of writing: an individual mark on a written medium that contributes to the meaning of what is written. A glyph is made up of one or more graphemes.

For example, in most languages written in any variety of the Latin alphabet
Latin alphabet
The Latin alphabet, also called the Roman alphabet, is the most recognized alphabet used in the world today. It evolved from a western variety of the Greek alphabet called the Cumaean alphabet, which was adopted and modified by the Etruscans who ruled early Rome...
the dot
Tittle
A tittle is a small distinguishing mark, such as a diacritic or the dot on a lowercase i or j. The tittle is an integral part of the glyph of i and j, but diacritic dots can appear over other letters in various languages...
on a lower-case "i" is not a glyph because it does not convey any distinction, and an i in which the dot has been accidentally omitted is still likely to be read as an "i". However in Turkish it is a glyph, because that language has two distinct versions of the letter "i", with and without a dot.

In Japanese syllabaries, a number of the characters are made up of more than one separate mark, but in general these separate marks are not glyphs because they have no meaning by themselves. However in some cases, additional marks fulfill the role of diacritic
Diacritic
A diacritic is a glyph added to a letter, or basic glyph. The term derives from the Greek διακριτικός . Diacritic is both an adjective and a noun, whereas diacritical is only an adjective. Some diacritical marks, such as the acute and grave are often called accents...
s, to differentiate distinct characters. Such additional marks constitute glyphs.

In general a diacritic
Diacritic
A diacritic is a glyph added to a letter, or basic glyph. The term derives from the Greek διακριτικός . Diacritic is both an adjective and a noun, whereas diacritical is only an adjective. Some diacritical marks, such as the acute and grave are often called accents...
is a glyph, even if (like a cedilla
Cedilla
A cedilla , also known as cedilha or cédille, is a hook added under certain letters as a diacritical mark to modify their pronunciation.-Origin:...
in Spanish, the ogonek
Ogonek
The ogonek is a diacritic hook placed under the lower right corner of a vowel in the Latin alphabet used in several European and Native American languages.-Use:...
in several languages or the stroke on a Polish L) it is "joined up" with the rest of the character.

Some characters such as ⟨æ⟩ in Icelandic and the ⟨ß⟩ in German would probably be regarded as glyphs: they were originally ligatures but over time have become characters in their own right, and these languages treat them as separate letters. However a ligature such as "ffi", which is treated in some typefaces as a single unit, is arguably not a glyph as this is just a quirk of the typeface, essentially an allographic feature, and includes more than one grapheme. In normal handwriting, even long words are often written "joined up", without the pen leaving the paper, and the form of each written letter will often vary depending on which letters precede and follow it, but that does not make the whole word into a single glyph.

Two or more glyphs which have the same significance, whether used interchangeably or chosen depending on context, are called allographs of each other.

The term has been used in English since 1727, borrowed from glyphe (in use by French antiquaries since 1701), from the Greek
Greek language
Greek is an independent branch of the Indo-European family of languages. Native to the southern Balkans, it has the longest documented history of any Indo-European language, spanning 34 centuries of written records. Its writing system has been the Greek alphabet for the majority of its history;...
γλυφή, glyphē, "carving," and the verb γλύφειν, glýphein, "to hollow out, engrave, carve" (cognate with Latin glubere "to peel" and English cleave).

Compare the carved and incised "sacred glyphs" hieroglyphs, which have had a longer history in English, dating from the first Elizabethan translation of Plutarch, who adopted "hieroglyphic" as a Latin adjective.
But the word "glyph" first came to widespread European attention with the engravings and lithographs from Frederick Catherwood
Frederick Catherwood
Frederick Catherwood was an English artist and architect, best remembered for his meticulously detailed drawings of the ruins of the Maya civilization. He explored Mesoamerica in the mid 19th century with writer John Lloyd Stephens...
's drawings of undeciphered glyphs of the Maya civilization
Maya civilization
The Maya is a Mesoamerican civilization, noted for the only known fully developed written language of the pre-Columbian Americas, as well as for its art, architecture, and mathematical and astronomical systems. Initially established during the Pre-Classic period The Maya is a Mesoamerican...
in the early 1840s.

In archaeology, a glyph is a carved or inscribed symbol. It may be a pictogram
Pictogram
A pictograph, also called pictogram or pictogramme is an ideogram that conveys its meaning through its pictorial resemblance to a physical object. Pictographs are often used in writing and graphic systems in which the characters are to considerable extent pictorial in appearance.Pictography is a...
or ideogram
Ideogram
An ideogram or ideograph is a graphic symbol that represents an idea or concept. Some ideograms are comprehensible only by familiarity with prior convention; others convey their meaning through pictorial resemblance to a physical object, and thus may also be referred to as pictograms.Examples of...
, or part of a writing system
Writing system
A writing system is a symbolic system used to represent elements or statements expressible in language.-General properties:Writing systems are distinguished from other possible symbolic communication systems in that the reader must usually understand something of the associated spoken language to...
such as a syllable
Syllabary
A syllabary is a set of written symbols that represent syllables, which make up words. In a syllabary, there is no systematic similarity between the symbols which represent syllables with the same consonant or vowel...
, or a logogram
Logogram
A logogram, or logograph, is a grapheme which represents a word or a morpheme . This stands in contrast to phonograms, which represent phonemes or combinations of phonemes, and determinatives, which mark semantic categories.Logograms are often commonly known also as "ideograms"...
. 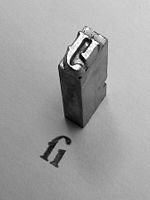 In typography
Typography
Typography is the art and technique of arranging type in order to make language visible. The arrangement of type involves the selection of typefaces, point size, line length, leading , adjusting the spaces between groups of letters and adjusting the space between pairs of letters...
, a glyph has a slightly different definition: it is "the specific shape, design, or representation of a character". It is a particular graphical representation, in a particular typeface
Typeface
In typography, a typeface is the artistic representation or interpretation of characters; it is the way the type looks. Each type is designed and there are thousands of different typefaces in existence, with new ones being developed constantly....
, of an element of written language, which could be a grapheme, or part of a grapheme, or sometimes several graphemes in combination (a composed glyph). If there is more than one allograph of a unit of writing, and the choice between them depends on context or on the preference of the author, they now have to be treated as separate glyphs, because mechanical arrangements have to be available to differentiate between them and to print whichever of them is required. The same is true in computing
Computing
Computing is usually defined as the activity of using and improving computer hardware and software. It is the computer-specific part of information technology...
. In computing
Computing
Computing is usually defined as the activity of using and improving computer hardware and software. It is the computer-specific part of information technology...
as well as typography, the term character
Character (computing)
In computer and machine-based telecommunications terminology, a character is a unit of information that roughly corresponds to a grapheme, grapheme-like unit, or symbol, such as in an alphabet or syllabary in the written form of a natural language....
refers to a grapheme or grapheme-like unit of text, as found in natural language
Natural language
In the philosophy of language, a natural language is any language which arises in an unpremeditated fashion as the result of the innate facility for language possessed by the human intellect. A natural language is typically used for communication, and may be spoken, signed, or written...
writing system
Writing system
A writing system is a symbolic system used to represent elements or statements expressible in language.-General properties:Writing systems are distinguished from other possible symbolic communication systems in that the reader must usually understand something of the associated spoken language to...
s (scripts). In typography and computing, the range of graphemes is broader than in a written language in other ways too: a typographical font
Font
In typography, a font is traditionally defined as a quantity of sorts composing a complete character set of a single size and style of a particular typeface...
often has to cope with a range of different languages each of which contribute their own graphemes, and it may also be required to print other symbols such as dingbat
Dingbat
A dingbat is an ornament, character or spacer used in typesetting, sometimes more formally known as a "printer's ornament" or "printer's character"....
s. The range of glyphs required increases correspondingly. In summary, in typography and computing, a glyph is a graphical
Graphics
Graphics are visual presentations on some surface, such as a wall, canvas, computer screen, paper, or stone to brand, inform, illustrate, or entertain. Examples are photographs, drawings, Line Art, graphs, diagrams, typography, numbers, symbols, geometric designs, maps, engineering drawings,or...
unit.

In graphonomics
Graphonomics
Graphonomics is the interdisciplinary field directed towards the scientific analysis of the handwriting process and the handwritten product. Researchers in handwriting recognition, forensic handwriting examination, kinesiology, psychology, computer science, artificial intelligence, paleography and...
, the term glyph is used for a non-character, i.e.: either a sub-character or multi-character pattern. Most typographic glyphs originate from the characters of a typeface
Typeface
In typography, a typeface is the artistic representation or interpretation of characters; it is the way the type looks. Each type is designed and there are thousands of different typefaces in existence, with new ones being developed constantly....
. In a typeface each character typically corresponds to a single glyph, but there are exceptions, such as a font used for a language with a large alphabet or complex writing system, where one character may correspond to several glyphs, or several characters to one glyph.