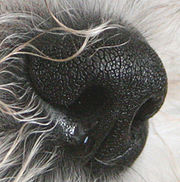 The rhinarium is the moist, naked surface around the nostril
Nostril
A nostril is one of the two channels of the nose, from the point where they bifurcate to the external opening. In birds and mammals, they contain branched bones or cartilages called turbinates, whose function is to warm air on inhalation and remove moisture on exhalation...
s of the nose
Nose
Anatomically, a nose is a protuberance in vertebrates that houses the nostrils, or nares, which admit and expel air for respiration in conjunction with the mouth. Behind the nose are the olfactory mucosa and the sinuses. Behind the nasal cavity, air next passes through the pharynx, shared with the...
in most mammals. In actual scientific usage it is typically called a "wet snout" or "wet nose" from its moist and shiny appearance. The groove in the center of it, which reaches the mouth, is called the philtrum
Philtrum
The philtrum , is a medial cleft common to many mammals, extending from the nose to the upper lip, and, together with a glandular rhinarium and slit-like nostrils, is believed to constitute the primitive condition for mammals in general...
.

Anatomically the rhinarium is certainly part of the olfactory system
Olfaction
Olfaction is the sense of smell. This sense is mediated by specialized sensory cells of the nasal cavity of vertebrates, and, by analogy, sensory cells of the antennae of invertebrates...
. Whether it evolved from and is part of the Main Olfactory System, which captured media-borne odors, or the "second nose", the Accessory Olfactory System, which sampled chemicals in fluid solution more directly, has been debated. Ankel-Simons views the rhinarium as "an outward extension of the olfactory ... skin that covers the nasal passages, [which] contains nerve receptors for smell and touch." If that interpretation is true, and the rhinarium extends the olfactory epithelium
Olfactory epithelium
The olfactory epithelium is a specialized epithelial tissue inside the nasal cavity that is involved in smell. In humans, it measures about 1 square centimetre and lies on the roof of the nasal cavity about 7 cm above and behind the nostrils...
, the tissue that lines the nasal passages, the rhinarium is part of the main system. In an opposing point of view the philtrum typically traces a path that continues over a notch in the upper lip, through a gap between the first incisor
Incisor
Incisors are the first kind of tooth in heterodont mammals. They are located in the premaxilla above and mandible below.-Function:...
s and premaxilla
Premaxilla
The incisive bone is the portion of the maxilla adjacent to the incisors. It is a pair of small cranial bones at the very tip of the jaws of many animals, usually bearing teeth, but not always. They are connected to the maxilla and the nasals....
e, along a "midline palatal groove" to "a canal that connects with the duct of the vomeronasal organ
Vomeronasal organ
The vomeronasal organ , or Jacobson's organ, is an auxiliary olfactory sense organ that is found in many animals. It was discovered by Frederik Ruysch and later by Ludwig Jacobson in 1813....
," part of the accessory system. Where on the one hand the moisture (mucus
Mucus
In vertebrates, mucus is a slippery secretion produced by, and covering, mucous membranes. Mucous fluid is typically produced from mucous cells found in mucous glands. Mucous cells secrete products that are rich in glycoproteins and water. Mucous fluid may also originate from mixed glands, which...
) may have trapped odiferous molecules in the medium, on the other hand it may be the remnant of a fluid transmission system for molecules of pheromone
Pheromone
A pheromone is a secreted or excreted chemical factor that triggers a social response in members of the same species. Pheromones are chemicals capable of acting outside the body of the secreting individual to impact the behavior of the receiving individual...
s. The rhinarium is typically crenellated (wrinkled) to increase its sensory area, but, "contra Ankel-Simons," it has no "olfactory receptors" and there is no clear path to the main system.

Mammals with rhinaria tend to have a stronger sense of olfaction
Olfaction
Olfaction is the sense of smell. This sense is mediated by specialized sensory cells of the nasal cavity of vertebrates, and, by analogy, sensory cells of the antennae of invertebrates...
, and the loss of the rhinarium in the haplorrhine primates is related to their decreased reliance on olfaction, being associated with other derived characteristics such as a reduced number of turbinate
Turbinate
In anatomy, a nasal concha is a long, narrow and curled bone shelf that protrudes into the breathing passage of the nose...
s.
The rhinarium is very useful to animals with good sense of smell because it acts as a wind direction detector. The cold receptors in the skin respond to the place where evaporation is the highest. Thus the detection of a particular smell is associated with the direction it came from.

The rhinarium is adapted for different purposes in different mammals according to ecological niche
Ecological niche
In ecology, a niche is a term describing the relational position of a species or population in its ecosystem to each other; e.g. a dolphin could potentially be in another ecological niche from one that travels in a different pod if the members of these pods utilize significantly different food...
. In aquatic mammals, development of lobes next to the nostrils allow them to be closed for diving. In mammals that root, the rhinarium often develops into a hard pad, with the nostrils off to the side. In the elephants it has become a tactile organ. In the walrus, it is covered with stiff bristles to protect it during foraging for shellfish. In many animals the form and purpose of the rhinarium remains to be elucidated.

The rhinarium is a general mammalian feature and therefore is likely to have been present in the proto-mammal stage.

Primate
Primate
A primate is a mammal of the order Primates , which contains prosimians and simians. Primates arose from ancestors that lived in the trees of tropical forests; many primate characteristics represent adaptations to life in this challenging three-dimensional environment...
s are phylogenetically
Phylogenetics
In biology, phylogenetics is the study of evolutionary relatedness among groups of organisms , which is discovered through molecular sequencing data and morphological data matrices...
divided into Strepsirrhini
Strepsirrhini
The clade Strepsirrhini is one of the two suborders of primates. Madagascar's only non-human primates are strepsirrhines, and others can be found in southeast Asia and Africa...
("curly-nosed" primates with rhinariums, which is the ancestral condition) and Haplorrhini
Haplorrhini
The haplorhines, the "dry-nosed" primates , are members of the Haplorhini clade: the prosimian tarsiers and the anthropoids...
("simple-nosed" primates which have replaced the rhinarium with a more mobile, continuous, dry upper lip).

Note that the traditional paraphyletic
Paraphyly
A group of taxa is said to be paraphyletic if the group consists of all the descendants of a hypothetical closest common ancestor minus one or more monophyletic groups of descendants...
"prosimian
Prosimian
Prosimians are a grouping of mammals defined as being primates, but not monkeys or apes. They include, among others, lemurs, bushbabies, and tarsiers. They are considered to have characteristics that are more primitive than those of monkeys and apes. Prosimians are the only primates native to...
" division of primates cannot be characterised by the presence of a rhinarium, due to its absence in the tarsier
Tarsier
Tarsiers are haplorrhine primates of the genus Tarsius, a genus in the family Tarsiidae, which is itself the lone extant family within the infraorder Tarsiiformes...
s, and loss of the rhinarium is not a synapomorphy
Synapomorphy
In cladistics, a synapomorphy or synapomorphic character is a trait that is shared by two or more taxa and their most recent common ancestor, whose ancestor in turn does not possess the trait. A synapomorphy is thus an apomorphy visible in multiple taxa, where the trait in question originates in...
of the simian
Simian
The simians are the "higher primates" familiar to most people: the Old World monkeys and apes, including humans, , and the New World monkeys or platyrrhines. Simians tend to be larger than the "lower primates" or prosimians.- Classification and evolution :The simians are split into three groups...
s or anthropoids, but a symplesiomorphy
Symplesiomorphy
In cladistics, a symplesiomorphy or symplesiomorphic character is a trait which is shared between two or more taxa, but which is also shared with other taxa which have an earlier last common ancestor with the taxa under consideration...
shared with the tarsier outgroup
Outgroup
In cladistics or phylogenetics, an outgroup is a group of organisms that serves as a reference group for determination of the evolutionary relationship among three or more monophyletic groups of organisms....
.
The source of this article is wikipedia, the free encyclopedia.  The text of this article is licensed under the GFDL.