Encyclopedia
The RheinEnergieStadion is a football stadium
Stadium
A modern stadium is a place or venue for outdoor sports, concerts, or other events and consists of a field or stage either partly or completely surrounded by a structure designed to allow spectators to stand or sit and view the event.)Pausanias noted that for about half a century the only event...
in Cologne
Cologne
Cologne is Germany's fourth-largest city , and is the largest city both in the Germany Federal State of North Rhine-Westphalia and within the Rhine-Ruhr Metropolitan Area, one of the major European metropolitan areas with more than ten million inhabitants.Cologne is located on both sides of the...
, North Rhine-Westphalia
North Rhine-Westphalia
North Rhine-Westphalia is the most populous state of Germany, with four of the country's ten largest cities. The state was formed in 1946 as a merger of the northern Rhineland and Westphalia, both formerly part of Prussia. Its capital is Düsseldorf. The state is currently run by a coalition of the...
, Germany
Germany
Germany , officially the Federal Republic of Germany , is a federal parliamentary republic in Europe. The country consists of 16 states while the capital and largest city is Berlin. Germany covers an area of 357,021 km2 and has a largely temperate seasonal climate...
. It was built on the site of the two previous Müngersdorfer stadiums. It is the home of the local Bundesliga team, 1. FC Köln
1. FC Köln
1. FC Köln is a German association football club based in Cologne, North Rhine-Westphalia. It was formed in 1948 as a merger of the clubs Kölner Ballspiel-Club 1901 and SpVgg Sülz 07....
. The stadium was one of the 12 hosting the 2006 FIFA World Cup
2006 FIFA World Cup
The 2006 FIFA World Cup was the 18th FIFA World Cup, the quadrennial international football world championship tournament. It was held from 9 June to 9 July 2006 in Germany, which won the right to host the event in July 2000. Teams representing 198 national football associations from all six...
. The stadium's name comes from a contract with the local power supplier RheinEnergie AG.

Under the terms of the Treaty of Versailles
Treaty of Versailles
The Treaty of Versailles was one of the peace treaties at the end of World War I. It ended the state of war between Germany and the Allied Powers. It was signed on 28 June 1919, exactly five years after the assassination of Archduke Franz Ferdinand. The other Central Powers on the German side of...
(1919), the fortifications of Cologne
Cologne
Cologne is Germany's fourth-largest city , and is the largest city both in the Germany Federal State of North Rhine-Westphalia and within the Rhine-Ruhr Metropolitan Area, one of the major European metropolitan areas with more than ten million inhabitants.Cologne is located on both sides of the...
were removed, thus allowing for the building of a new structure in the surrounding area. The new construction enabled the city to create 15,000 jobs. The new stadium was called the Müngersdorfer Stadion or the Kölner Stadion. This allowed Cologne not only to help stabilize the country but also to gain prestige and economic benefits for the city. The cost was tallied at 47.4 million Deutsche Mark.

One of the specialties of the Müngersdorfer Stadion was the track meets for non-professional sportsmen. In 1929 there were over 38,000 participants. However, in 1933 Jews were no longer allowed to take part. After the war the non-professional level was never regained.

The Müngersdorfer has been host to many important UEFA Cup
UEFA Cup
The UEFA Europa League is an annual association football cup competition organised by UEFA since 1971 for eligible European football clubs. It is the second most prestigious European club football contest after the UEFA Champions League...
matches. Bayer Leverkusen
Bayer Leverkusen
Bayer 04 Leverkusen is a German football club based in Leverkusen, North Rhine-Westphalia. It is the most well-known department of TSV Bayer 04 Leverkusen, a sports club whose members also participate in athletics, gymnastics, basketball and other sports.-Origins and early years:On 27 November...
played against FC Barcelona
FC Barcelona
Futbol Club Barcelona , also known as Barcelona and familiarly as Barça, is a professional football club, based in Barcelona, Catalonia, Spain....
, and Galatasaray
Galatasaray S.K. (football team)
Galatasaray Anonim Şirketi is a Turkish football club, part of the Galatasaray S.K. multi-sport club of Istanbul. Galatasaray is a major sports club in Turkey, holding 17 Turkish Super League titles and the highest number of Turkish Cups....
against AS Monaco in the 1989 UEFA Cup
UEFA Cup 1988-89
The UEFA Cup 1988-89 was won by Napoli over Stuttgart.It was the fourth season for which English clubs were banned from European competitions as a result of the Heysel disaster in May 1985...
. Borussia Mönchengladbach
Borussia Mönchengladbach
Borussia Mönchengladbach is a German association football club based in Mönchengladbach, North Rhine-Westphalia. The team plays in the Bundesliga and is one of the country's most well-known, well-supported, and successful teams. Borussia Mönchengladbach has over 40,000 members and is the sixth...
played both Arsenal
Arsenal F.C.
Arsenal Football Club is a professional English Premier League football club based in North London. One of the most successful clubs in English football, it has won 13 First Division and Premier League titles and 10 FA Cups...
and AS Monaco in the 1996 UEFA Cup
UEFA Cup 1996-97
The UEFA Cup 1996-97 was won by Schalke 04 in penalties over Internazionale.This was the last year in which the UEFA Cup Final was played in a two-legged, home-and-away format...
. The stadium also functioned as the home ground to second-tier Alemannia Aachen
Alemannia Aachen
Alemannia Aachen is a German football club from the western city of Aachen, North Rhine-Westphalia. A long term fixture of the country's second division, Alemannia enjoyed a three-year turn in the top flight in the late 1960s and, after a successful 2005–06 campaign, returned to first division play...
in their 2004-05 UEFA Cup campaign. 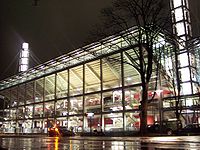 In 1974, the World Cup was held in West Germany
West Germany
West Germany is the common English, but not official, name for the Federal Republic of Germany or FRG in the period between its creation in May 1949 to German reunification on 3 October 1990....
, and Cologne
Cologne
Cologne is Germany's fourth-largest city , and is the largest city both in the Germany Federal State of North Rhine-Westphalia and within the Rhine-Ruhr Metropolitan Area, one of the major European metropolitan areas with more than ten million inhabitants.Cologne is located on both sides of the...
had wanted to be a host city. The city's bid was approved and it soon began work on a new stadium that was to replace the now outdated Müngersdorfer Stadion. However, the city was unable to raise the money needed for a stadium of the desired size. The original plan was for an 80,000-seat arena, which was planned to have cost 23.5 million Deutsche Mark. But the total kept growing. In the end, if the stadium had been completed, the cost would have amounted to 93.5 million. At the time, the city was able to provide only an extra 6 million Deutsche Mark.

With the news of the prospect of bringing the World Cup back to Germany, the city reacted and started renovation of the stadium, which was completed in 2003. Unlike previous configurations, there are no track-and-field facilities, allowing spectators to be much closer to the pitch than they might have been in a traditional continental multi-purpose stadium
Multi-purpose stadium
Multi-purpose stadiums are a type of stadium designed in such a way as to be easily used by multiple sports. While any stadium could potentially host more than one sport, this concept usually refers to a specific design philosophy that stresses multi-functionality over specificity...
. Thus, the stadium was designed like English-style football stadia, e.g., Anfield, Stamford Bridge, Villa Park and White Hart Lane, with spectators almost on top of the pitch and players.

The capacity is 50,000 visitors during club matches and 46,195 for international games, when there are no standing spectators allowed. The entire field is lit with a floodlight system. In the north grandstand there is a museum dedicated to 1. FC Köln
1. FC Köln
1. FC Köln is a German association football club based in Cologne, North Rhine-Westphalia. It was formed in 1948 as a merger of the clubs Kölner Ballspiel-Club 1901 and SpVgg Sülz 07....
.

The following games were played at the stadium during the World Cup of 2006: