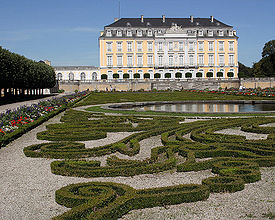 The district in its current borders was created in 1975, when the previous districts Bergheim and Cologne were merged. Becoming effective on November 1, 2003 the district was renamed from Erftkreis to Rhein-Erft-Kreis.

The main river in the district is the Erft
Erft
The Erft is a river in North Rhine-Westphalia, Germany. It flows through the foothills of the Eifel, and joins the Lower Rhine . Its origin is near Nettersheim, and its mouth in Neuss-Grimlinghausen south of the Josef-Cardinal-Frings-bridge. The river is 103 km long, which is significantly...
, which also gave it the name. The Erft flows through the foothills of the Eifel
Eifel
The Eifel is a low mountain range in western Germany and eastern Belgium. It occupies parts of southwestern North Rhine-Westphalia, northwestern Rhineland-Palatinate and the south of the German-speaking Community of Belgium....
, on the left side of the Rhine river.

The coat of arms shows the lion of Jülich
Jülich
Jülich is a town in the district of Düren, in the federal state of North Rhine-Westphalia, Germany. Jülich is well known as location of a world-famous research centre, the Forschungszentrum Jülich and as shortwave transmission site of Deutsche Welle...
in the left half, as most of the area belonged to the duchy of Jülich
Duchy of Jülich
The Duchy of Jülich comprised a state within the Holy Roman Empire from the 11th to the 18th centuries. The duchy lay left of the Rhine river between the Electorate of Cologne in the east and the Duchy of Limburg in the west. It had territories on both sides of the river Rur, around its capital...
. The right side shows the Cologne cross, which stands for the former Cologne district. On top the Erft river is depicted; the Prussian Rhine Province
Rhine Province
The Rhine Province , also known as Rhenish Prussia or synonymous to the Rhineland , was the westernmost province of the Kingdom of Prussia and the Free State of Prussia, within the German Reich, from 1822-1946. It was created from the provinces of the Lower Rhine and Jülich-Cleves-Berg...
had the same symbol in its coat of arms.