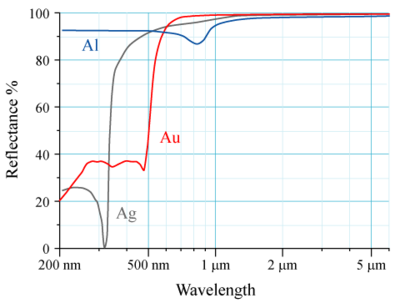 In optics
Optics
Optics is the branch of physics which involves the behavior and properties of light, including its interactions with matter and the construction of instruments that use or detect it. Optics usually describes the behavior of visible, ultraviolet, and infrared light...
and photometry
Photometry (optics)
Photometry is the science of the measurement of light, in terms of its perceived brightness to the human eye. It is distinct from radiometry, which is the science of measurement of radiant energy in terms of absolute power; rather, in photometry, the radiant power at each wavelength is weighted by...
, reflectivity is the fraction of incident radiation reflected
Reflection (physics)
Reflection is the change in direction of a wavefront at an interface between two differentmedia so that the wavefront returns into the medium from which it originated. Common examples include the reflection of light, sound and water waves...
by a surface. In general it must be treated as a directional property that is a function of the reflected direction, the incident direction, and the incident wavelength. However it is also commonly averaged over the reflected hemisphere to give the hemispherical spectral reflectivity:

are the reflected and incident spectral (per wavelength) intensity
Intensity (physics)
In physics, intensity is a measure of the energy flux, averaged over the period of the wave. The word "intensity" here is not synonymous with "strength", "amplitude", or "level", as it sometimes is in colloquial speech...
, respectively.

This can be further averaged over all wavelengths (in a given band of interest—say, optical) to give the total hemispherical reflectivity, or reflectance factor:

Reflectivity and reflectance generally refer to the fraction of incident electromagnetic power that is reflected at an interface, while the term "reflection coefficient" is used for the fraction of electric field reflected. The reflectance or reflectivity is thus the square of the magnitude of the reflection coefficient. The reflection coefficient can be expressed as a complex number
Complex number
A complex number is a number consisting of a real part and an imaginary part. Complex numbers extend the idea of the one-dimensional number line to the two-dimensional complex plane by using the number line for the real part and adding a vertical axis to plot the imaginary part...
as determined by the Fresnel equations for a single layer, whereas the reflectance (or reflectivity) is always a positive real number
Real number
In mathematics, a real number is a value that represents a quantity along a continuum, such as -5 , 4/3 , 8.6 , √2 and π...
.

Most real objects have some mixture of diffuse and specular reflective properties. 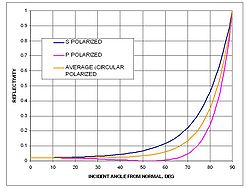 A real water surface may be wavy. Reflectivity assuming a flat surface as given by the Fresnel equations
Fresnel equations
The Fresnel equations , deduced by Augustin-Jean Fresnel , describe the behaviour of light when moving between media of differing refractive indices...
can be adjusted to account for waviness
Waviness
Waviness is the measure of the more widely spaced component of surface texture. It is a broader view of roughness because it is more strictly defined as "the irregularities whose spacing is greater than the roughness sampling length"...
.

The generalization of reflectance to a diffraction grating
Diffraction grating
In optics, a diffraction grating is an optical component with a periodic structure, which splits and diffracts light into several beams travelling in different directions. The directions of these beams depend on the spacing of the grating and the wavelength of the light so that the grating acts as...
, which disperses light by wavelength
Wavelength
In physics, the wavelength of a sinusoidal wave is the spatial period of the wave—the distance over which the wave's shape repeats.It is usually determined by considering the distance between consecutive corresponding points of the same phase, such as crests, troughs, or zero crossings, and is a...
, is called diffraction efficiency.

Reflectivity is an important concept in the fields of optics
Optics
Optics is the branch of physics which involves the behavior and properties of light, including its interactions with matter and the construction of instruments that use or detect it. Optics usually describes the behavior of visible, ultraviolet, and infrared light...
, solar thermal energy
Solar thermal energy
Solar thermal energy is a technology for harnessing solar energy for thermal energy . Solar thermal collectors are classified by the United States Energy Information Administration as low-, medium-, or high-temperature collectors. Low-temperature collectors are flat plates generally used to heat...
, telecommunication
Telecommunication
Telecommunication is the transmission of information over significant distances to communicate. In earlier times, telecommunications involved the use of visual signals, such as beacons, smoke signals, semaphore telegraphs, signal flags, and optical heliographs, or audio messages via coded...
and radar
Radar
Radar is an object-detection system which uses radio waves to determine the range, altitude, direction, or speed of objects. It can be used to detect aircraft, ships, spacecraft, guided missiles, motor vehicles, weather formations, and terrain. The radar dish or antenna transmits pulses of radio...
.