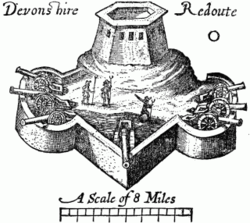 A redoubt is a fort or fort system usually consisting of an enclosed defensive emplacement outside a larger fort, usually relying on earthwork
Earthworks (engineering)
Earthworks are engineering works created through the moving or processing of quantities of soil or unformed rock.- Civil engineering use :Typical earthworks include roads, railway beds, causeways, dams, levees, canals, and berms...
s, though others are constructed of stone or brick. It is meant to protect soldiers outside the main defensive line and can be a permanent structure or a hastily-constructed temporary fortification. Redoubts were a component of the military strategies of most European empires during the colonial era, especially in the outer works of Vauban
Vauban
Sébastien Le Prestre, Seigneur de Vauban and later Marquis de Vauban , commonly referred to as Vauban, was a Marshal of France and the foremost military engineer of his age, famed for his skill in both designing fortifications and breaking through them...
-style fortresses made popular during the 17th century, although the concept of redoubts has existed since medieval times. A redoubt differs from a redan
Redan
Redan is a term related to fortifications. It is a work in a V-shaped salient angle toward an expected attack...
in that the redan is open in the rear, whereas the redoubt was considered an enclosed work.

The advent of mobile warfare
Mobile warfare
*For various forms of wars based on mobility, see Maneuver warfare.*For the specific military methods of Mao Zedong, yundong zhan, see Mobile Warfare....
in the 20th Century generally diminished the importance of the defence of static positions and siege warfare.


Wars of the Three Kingdoms

See the Battle of Poltava
Battle of Poltava
The Battle of Poltava on 27 June 1709 was the decisive victory of Peter I of Russia over the Swedish forces under Field Marshal Carl Gustav Rehnskiöld in one of the battles of the Great Northern War. It is widely believed to have been the beginning of Sweden's decline as a Great Power; the...
(1709), the Battle of Bunker Hill
Battle of Bunker Hill
The Battle of Bunker Hill took place on June 17, 1775, mostly on and around Breed's Hill, during the Siege of Boston early in the American Revolutionary War...
(1775), the Battle of Yorktown
Siege of Yorktown
The Siege of Yorktown, Battle of Yorktown, or Surrender of Yorktown in 1781 was a decisive victory by a combined assault of American forces led by General George Washington and French forces led by the Comte de Rochambeau over a British Army commanded by Lieutenant General Lord Cornwallis...
(1781) where Alexander Hamilton led his only military command against a British redoubt, the Lines of Torres Vedras
Lines of Torres Vedras
The Lines of Torres Vedras were lines of forts built in secrecy to defend Lisbon during the Peninsular War. Named after the nearby town of Torres Vedras, they were ordered by Arthur Wellesley, Viscount Wellington, constructed by Sir Richard Fletcher, 1st Baronet and his Portuguese workers between...
of the Peninsular War
Peninsular War
The Peninsular War was a war between France and the allied powers of Spain, the United Kingdom, and Portugal for control of the Iberian Peninsula during the Napoleonic Wars. The war began when French and Spanish armies crossed Spain and invaded Portugal in 1807. Then, in 1808, France turned on its...
(1809–1810), the Battle of Borodino
Battle of Borodino
The Battle of Borodino , fought on September 7, 1812, was the largest and bloodiest single-day action of the French invasion of Russia and all Napoleonic Wars, involving more than 250,000 troops and resulting in at least 70,000 casualties...
(1812), the Charge of the Light Brigade
Charge of the Light Brigade
The Charge of the Light Brigade was a charge of British cavalry led by Lord Cardigan against Russian forces during the Battle of Balaclava on 25 October 1854 in the Crimean War. The charge was the result of a miscommunication in such a way that the brigade attempted a much more difficult objective...
(1854), the Railroad Redoubt
Railroad Redoubt
The Railroad Redoubt was one of several redoubts, or small defensive earthworks, that were constructed during the American Civil War to protect the city of Vicksburg, Mississippi, from Union attack. It was so named because it was constructed along a major east-west railroad track into Vicksburg.On...
of the Battle of Vicksburg
Battle of Vicksburg
The Siege of Vicksburg was the final major military action in the Vicksburg Campaign of the American Civil War. In a series of maneuvers, Union Maj. Gen. Ulysses S. Grant and his Army of the Tennessee crossed the Mississippi River and drove the Confederate army of Lt. Gen. John C...
(1863), the Battle of Rorke's Drift (1879), and during World War I
World War I
World War I , which was predominantly called the World War or the Great War from its occurrence until 1939, and the First World War or World War I thereafter, was a major war centred in Europe that began on 28 July 1914 and lasted until 11 November 1918...
the "National Redoubt of Antwerp" (1914) as well as the Hawthorn Ridge Redoubt
Hawthorn Ridge Redoubt
Hawthorn Ridge Redoubt was a German front-line fortification west of the village of Beaumont Hamel on the Somme. It was the scene of a number of costly attacks by British infantry during the Battle of the Somme in 1916...
(1916) and the Vercors
Vercors
Vercors is an upland district in the south-east of France:* Vercors Caves, a set of long caves* Vercors Plateau, a range of mountains and plateaus in the department of Isère, French Alps* Vercors Regional Natural Park, a protected area of southeastern France...
plateau redoubt used by the Free French Forces
Free French Forces
The Free French Forces were French partisans in World War II who decided to continue fighting against the forces of the Axis powers after the surrender of France and subsequent German occupation and, in the case of Vichy France, collaboration with the Germans.-Definition:In many sources, Free...
in World War II
World War II
World War II, or the Second World War , was a global conflict lasting from 1939 to 1945, involving most of the world's nations—including all of the great powers—eventually forming two opposing military alliances: the Allies and the Axis...
, are examples where redoubts played a crucial role in military history.

The "National Redoubt" was a (failed) redoubt planned for the government of Nazi Germany
Nazi Germany
Nazi Germany , also known as the Third Reich , but officially called German Reich from 1933 to 1943 and Greater German Reich from 26 June 1943 onward, is the name commonly used to refer to the state of Germany from 1933 to 1945, when it was a totalitarian dictatorship ruled by...
at the end of World War II, consisting of the mountainous regions of southern Bavaria
Bavaria
Bavaria, formally the Free State of Bavaria is a state of Germany, located in the southeast of Germany. With an area of , it is the largest state by area, forming almost 20% of the total land area of Germany...
, middle Austria
Austria
Austria , officially the Republic of Austria , is a landlocked country of roughly 8.4 million people in Central Europe. It is bordered by the Czech Republic and Germany to the north, Slovakia and Hungary to the east, Slovenia and Italy to the south, and Switzerland and Liechtenstein to the...
, and far northern Italy
South Tyrol
South Tyrol , also known by its Italian name Alto Adige, is an autonomous province in northern Italy. It is one of the two autonomous provinces that make up the autonomous region of Trentino-Alto Adige/Südtirol. The province has an area of and a total population of more than 500,000 inhabitants...
.

The word redoubt occurs as a verb meaning "to dread, stand in awe or apprehension of a person, nation, thing, or event." The more common adjective, redoubtable, denotes something respected, noted, distinguished, commanding respect, reverence, or apprehension.