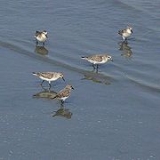 Encyclopedia
The Red-necked Stint is a small migratory wader
Wader
Waders, called shorebirds in North America , are members of the order Charadriiformes, excluding the more marine web-footed seabird groups. The latter are the skuas , gulls , terns , skimmers , and auks...
.

These birds are among the smallest of waders, very similar to the Little Stint
Little Stint
The Little Stint, Calidris minuta , is a very small wader. It breeds in arctic Europe and Asia, and is a long-distance migrant, wintering south to Africa and south Asia...
, Calidris minuta, with which they were once considered conspecific. The Red-necked Stint's small size, fine dark bill, dark legs and quicker movements distinguish this species from all waders except the other dark-legged stints. It measures 13–17 cm (5.1–6.7 in) in length, 28–37 cm (11–14.6 in) in wingspan and 21–51 g (0.740753204207351–1.8 oz) in body mass. It can be distinguished from the Western Sandpiper
Western Sandpiper
The Western Sandpiper, Calidris or Erolia mauri, is a small shorebird.Adults have dark legs and a short thin dark bill, thinner at the tip. The body is brown on top and white underneath. They are reddish-brown on the crown. This bird can be difficult to distinguish from other similar tiny...
and the Semipalmated Sandpiper
Semipalmated Sandpiper
The Semipalmated Sandpiper, Calidris pusilla, is a very small shorebird. It is sometimes separated with other "stints" in Erolia but although these apparently form a monophyletic group, the present species' old genus Ereunetes had been proposed before Erolia.Adults have black legs and a short stout...
in all plumages by its combination of a fine bill tip, unwebbed toes, and longer primary projection.

The breeding adult has an unstreaked orange breast, bordered with dark markings below, and a white V on its back. In winter plumage identification is difficult, although it is shorter legged and longer winged than the Little Stint. Juveniles have more contrasting mantle plumage and weaker white lines down the back than their relative. The call is a hoarse "stit".

Red-necked Stints are strongly migratory
Bird migration
Bird migration is the regular seasonal journey undertaken by many species of birds. Bird movements include those made in response to changes in food availability, habitat or weather. Sometimes, journeys are not termed "true migration" because they are irregular or in only one direction...
, breeding along the Arctic
Arctic
The Arctic is a region located at the northern-most part of the Earth. The Arctic consists of the Arctic Ocean and parts of Canada, Russia, Greenland, the United States, Norway, Sweden, Finland, and Iceland. The Arctic region consists of a vast, ice-covered ocean, surrounded by treeless permafrost...
littoral
Littoral
The littoral zone is that part of a sea, lake or river that is close to the shore. In coastal environments the littoral zone extends from the high water mark, which is rarely inundated, to shoreline areas that are permanently submerged. It always includes this intertidal zone and is often used to...
of eastern Eurasia
Eurasia
Eurasia is a continent or supercontinent comprising the traditional continents of Europe and Asia ; covering about 52,990,000 km2 or about 10.6% of the Earth's surface located primarily in the eastern and northern hemispheres...
and spending the non-breedng season in South East Asia and Australasia
Australasia
Australasia is a region of Oceania comprising Australia, New Zealand, the island of New Guinea, and neighbouring islands in the Pacific Ocean. The term was coined by Charles de Brosses in Histoire des navigations aux terres australes...
as far south as Tasmania
Tasmania
Tasmania is an Australian island and state. It is south of the continent, separated by Bass Strait. The state includes the island of Tasmania—the 26th largest island in the world—and the surrounding islands. The state has a population of 507,626 , of whom almost half reside in the greater Hobart...
and New Zealand
New Zealand
New Zealand is an island country in the south-western Pacific Ocean comprising two main landmasses and numerous smaller islands. The country is situated some east of Australia across the Tasman Sea, and roughly south of the Pacific island nations of New Caledonia, Fiji, and Tonga...
. They are rare vagrants to western Europe
Europe
Europe is, by convention, one of the world's seven continents. Comprising the westernmost peninsula of Eurasia, Europe is generally 'divided' from Asia to its east by the watershed divides of the Ural and Caucasus Mountains, the Ural River, the Caspian and Black Seas, and the waterways connecting...
. They are often seen in western Alaska
Alaska
Alaska is the largest state in the United States by area. It is situated in the northwest extremity of the North American continent, with Canada to the east, the Arctic Ocean to the north, and the Pacific Ocean to the west and south, with Russia further west across the Bering Strait...
and occasionally elsewhere in the Americas
Americas
The Americas, or America , are lands in the Western hemisphere, also known as the New World. In English, the plural form the Americas is often used to refer to the landmasses of North America and South America with their associated islands and regions, while the singular form America is primarily...
.

Their breeding habitat is tundra
Tundra
In physical geography, tundra is a biome where the tree growth is hindered by low temperatures and short growing seasons. The term tundra comes through Russian тундра from the Kildin Sami word tūndâr "uplands," "treeless mountain tract." There are three types of tundra: Arctic tundra, alpine...
. They nest on the ground and breed from spring to summer.

They forage in wet grassland and soft mud, mainly picking up food by sight. In their non-breeding habitat they feed on intertidal mudflats and along the muddy margins of freshwater lakes. They mainly eat insects and other small invertebrates.