Encyclopedia
Rueda Abbey or Rueda de Ebro Abbey is a former Cistercian monastery in Sástago
Sástago
Sástago is a municipality located in the province of Zaragoza, Aragon, Spain. According to the 2004 census , the municipality has a population of 1,307 inhabitants....
in the Ribera Baja del Ebro
Ribera Baja del Ebro
Ribera Baja del Ebro is a comarca in eastern Aragon, Spain. It is part of the historical region of Lower Aragon. The most important town is Quinto.It is located by the River Ebro about 40 km south-east of Zaragoza...
comarca, province of Zaragoza, Aragon
Aragon
Aragon is a modern autonomous community in Spain, coextensive with the medieval Kingdom of Aragon. Located in northeastern Spain, the Aragonese autonomous community comprises three provinces : Huesca, Zaragoza, and Teruel. Its capital is Zaragoza...
, Spain
Spain
Spain , officially the Kingdom of Spain languages]] under the European Charter for Regional or Minority Languages. In each of these, Spain's official name is as follows:;;;;;;), is a country and member state of the European Union located in southwestern Europe on the Iberian Peninsula...
, 74 kilometres to the south-east of Zaragoza
Zaragoza
Zaragoza , also called Saragossa in English, is the capital city of the Zaragoza Province and of the autonomous community of Aragon, Spain...
on the left bank of the Ebro
Ebro
The Ebro or Ebre is one of the most important rivers in the Iberian Peninsula. It is the biggest river by discharge volume in Spain.The Ebro flows through the following cities:*Reinosa in Cantabria.*Miranda de Ebro in Castile and León....
. The buildings have been preserved by the government and are intended to be used for a hotel and conference centre.

The first Cistercian monastery was founded in Cîteaux, France in the year 1089. Thence four daughter abbeys were spawned, including in the year 1115 one in Morimond, France. Monks from the Morimond Abbey
Morimond Abbey
Morimond Abbeyis a religious complex in Parnoy-en-Bassigny, Haute-Marne department, in the Champagne-Ardenne region of France. It was the fourth of the four great daughter abbeys of Cîteaux Abbey, of primary importance in the spread of the Cistercian Order, along with La Ferté to the south,...
founded the Gimont Abbey in France in 1152. The monks of Gimont received a land grant in Burjazud (Villanueva de Gállego, north to Zaragoza), Spain in 1162 but the monastery was not built there. This land was augmented by a grant from King Alfonso II of Aragon
Alfonso II of Aragon
Alfonso II or Alfons I ; Huesca, 1-25 March 1157 – 25 April 1196), called the Chaste or the Troubadour, was the King of Aragon and Count of Barcelona from 1164 until his death. He was the son of Ramon Berenguer IV of Barcelona and Petronilla of Aragon and the first King of Aragon who was...
in 1182 to include the riverside steep castle and village of Escatrón
Escatrón
Escatrón is a municipality located in the Ribera Baja del Ebro comarca, province of Zaragoza, Aragon, Spain. According to the 2009 census , the municipality has a population of 1,163 inhabitants.- External links :*...
,~50 km south-east downstream from Zaragoza. After two more decades the Real Monasterio de Nuestra Señora de Rueda was founded on the banks of the Ebro
Ebro
The Ebro or Ebre is one of the most important rivers in the Iberian Peninsula. It is the biggest river by discharge volume in Spain.The Ebro flows through the following cities:*Reinosa in Cantabria.*Miranda de Ebro in Castile and León....
River, next to a fluvial island and a salt lagoon (~12 km North). 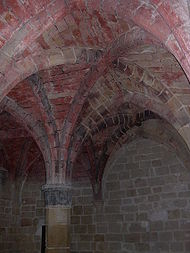 The principal works had begun by the end of the first quarter of the 13th century, and the first church was consecrated before the year 1238. A lavatorium was constructed in the 13th century. The cloisters were designed using a barrel vault
Barrel vault
A barrel vault, also known as a tunnel vault or a wagon vault, is an architectural element formed by the extrusion of a single curve along a given distance. The curves are typically circular in shape, lending a semi-cylindrical appearance to the total design...
ed stonework construction. By the beginning of the early 15th century the old Abbot
Abbot
The word abbot, meaning father, is a title given to the head of a monastery in various traditions, including Christianity. The office may also be given as an honorary title to a clergyman who is not actually the head of a monastery...
's Palace, the farm support buildings and laity area were complete. From the early founding the monks conducted important hydrological works including a dam on the Ebro and creation of a massive waterwheel or "rueda". The waterwheel diverted some of the river flow to a Gothic
Gothic architecture
Gothic architecture is a style of architecture that flourished during the high and late medieval period. It evolved from Romanesque architecture and was succeeded by Renaissance architecture....
aqueduct
Aqueduct
An aqueduct is a water supply or navigable channel constructed to convey water. In modern engineering, the term is used for any system of pipes, ditches, canals, tunnels, and other structures used for this purpose....
for distribution to various parts of the monastery; moreover, many of the water channels and plumbing uses are readily visible today. This series of hydrological innovations was an early example of indoor plumbing and waste disposal as well as a bona fide central heating
Central heating
A central heating system provides warmth to the whole interior of a building from one point to multiple rooms. When combined with other systems in order to control the building climate, the whole system may be a HVAC system.Central heating differs from local heating in that the heat generation...
system.

In the uninhabited Muslim frontier, the monks developed many useful implements, such as the salt mule track, saltwork equipment, a fluvial pier, a fluvial mule barge transport, an oil mill, a flour mill, a stone irrigation ditch with a waterwheel, a vineyard, a wine cellar, and an orchard surrounded by a sentry-boxed wall.

Further improvements and more elaborate reconstructions took place in the 16th and 17th centuries, especially around the principal square. Noteworthy is the Renaissance
Renaissance
The Renaissance was a cultural movement that spanned roughly the 14th to the 17th century, beginning in Italy in the Late Middle Ages and later spreading to the rest of Europe. The term is also used more loosely to refer to the historical era, but since the changes of the Renaissance were not...
arcade
Arcade (architecture)
An arcade is a succession of arches, each counterthrusting the next, supported by columns or piers or a covered walk enclosed by a line of such arches on one or both sides. In warmer or wet climates, exterior arcades provide shelter for pedestrians....
in Herrerian
Herrerian
The Herrerian was developed in Spain during the last third of the 16th century under the reign of Philip II , and continued in force in the 17th century, but transformed by the Baroque current of the time...
style that connects the medieval building complex with the Abbot's Palace. Thence a range of further new novice
Novice
A novice is a person or creature who is new to a field or activity. The term is most commonly applied in religion and sports.-Buddhism:In many Buddhist orders, a man or woman who intends to take ordination must first become a novice, adopting part of the monastic code indicated in the vinaya and...
s' rooms and bedrooms were built behind the arcade.

The Royal Gateway, a gatehouse
Gatehouse
A gatehouse, in architectural terminology, is a building enclosing or accompanying a gateway for a castle, manor house, fort, town or similar buildings of importance.-History:...
structure dating from the 17th and 18th centuries, serves as the modern day entrance to the entire complex.

As a result of the Ecclesiastical Confiscations of Mendizábal
Ecclesiastical Confiscations of Mendizábal
The Ecclesiastical Confiscations of Mendizabal, more often referred to simply as La Desamortización, encompasses a set of decrees from 1835-1837 that resulted in the expropriation, and privatization, of monastic properties in Spain....
of 1837 and 1838, lands and buildings belonging to the monastery were sold and the site was used for farming, with considerable destruction taking place. In 1990 the property came under governmental control through acquisition by the Diputacion General de Aragón. Thereafter huge expenses, considerable conservation and restoration occurred. The present including a three-star hotel and conference rooms. None of the Middle Ages portion has been altered. More restorations are in future plan.