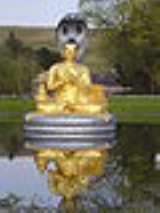 Encyclopedia
In Ayurvedic medicine, the traditional medical lore of Hinduism
Hinduism
Hinduism is the predominant and indigenous religious tradition of the Indian Subcontinent. Hinduism is known to its followers as , amongst many other expressions...
, rasa shastra is a process by which various metal
Metal
A metal , is an element, compound, or alloy that is a good conductor of both electricity and heat. Metals are usually malleable and shiny, that is they reflect most of incident light...
s and other substances, including mercury
Mercury (element)
Mercury is a chemical element with the symbol Hg and atomic number 80. It is also known as quicksilver or hydrargyrum...
, are purified and combined with herbs in an attempt to treat illnesses. Its methods correspond to the alchemy
Alchemy
Alchemy is an influential philosophical tradition whose early practitioners’ claims to profound powers were known from antiquity. The defining objectives of alchemy are varied; these include the creation of the fabled philosopher's stone possessing powers including the capability of turning base...
familiar in the Mediterranean and Western European worlds.

The methods of rasa shastra are contained in a number of Ayurvedic texts, including the Charaka Samhita
Charaka Samhita
The ' is an early Ayurvedic text on internal medicine. It is believed to be the oldest of the three ancient treatises of Ayurveda...
and Susruta Samhita. An important feature is the use of metals, including several that are considered to be toxic
Toxicity
Toxicity is the degree to which a substance can damage a living or non-living organisms. Toxicity can refer to the effect on a whole organism, such as an animal, bacterium, or plant, as well as the effect on a substructure of the organism, such as a cell or an organ , such as the liver...
in evidence-based medicine
Evidence-based medicine
Evidence-based medicine or evidence-based practice aims to apply the best available evidence gained from the scientific method to clinical decision making. It seeks to assess the strength of evidence of the risks and benefits of treatments and diagnostic tests...
. In addition to mercury, gold
Gold
Gold is a chemical element with the symbol Au and an atomic number of 79. Gold is a dense, soft, shiny, malleable and ductile metal. Pure gold has a bright yellow color and luster traditionally considered attractive, which it maintains without oxidizing in air or water. Chemically, gold is a...
, silver
Silver
Silver is a metallic chemical element with the chemical symbol Ag and atomic number 47. A soft, white, lustrous transition metal, it has the highest electrical conductivity of any element and the highest thermal conductivity of any metal...
, iron
Iron
Iron is a chemical element with the symbol Fe and atomic number 26. It is a metal in the first transition series. It is the most common element forming the planet Earth as a whole, forming much of Earth's outer and inner core. It is the fourth most common element in the Earth's crust...
, copper
Copper
Copper is a chemical element with the symbol Cu and atomic number 29. It is a ductile metal with very high thermal and electrical conductivity. Pure copper is soft and malleable; an exposed surface has a reddish-orange tarnish...
, tin
Tin
Tin is a chemical element with the symbol Sn and atomic number 50. It is a main group metal in group 14 of the periodic table. Tin shows chemical similarity to both neighboring group 14 elements, germanium and lead and has two possible oxidation states, +2 and the slightly more stable +4...
, lead
Lead
Lead is a main-group element in the carbon group with the symbol Pb and atomic number 82. Lead is a soft, malleable poor metal. It is also counted as one of the heavy metals. Metallic lead has a bluish-white color after being freshly cut, but it soon tarnishes to a dull grayish color when exposed...
, zinc
Zinc
Zinc , or spelter , is a metallic chemical element; it has the symbol Zn and atomic number 30. It is the first element in group 12 of the periodic table. Zinc is, in some respects, chemically similar to magnesium, because its ion is of similar size and its only common oxidation state is +2...
and bell metal
Bell metal
Bell metal is a hard alloy used for making bells. It is a form of bronze, usually approximately 4:1 ratio of copper to tin...
are used. In addition to these metals, salt
Salt
In chemistry, salts are ionic compounds that result from the neutralization reaction of an acid and a base. They are composed of cations and anions so that the product is electrically neutral...
s and other substances such as coral
Coral
Corals are marine animals in class Anthozoa of phylum Cnidaria typically living in compact colonies of many identical individual "polyps". The group includes the important reef builders that inhabit tropical oceans and secrete calcium carbonate to form a hard skeleton.A coral "head" is a colony of...
, seashell
Seashell
A seashell or sea shell, also known simply as a shell, is a hard, protective outer layer created by an animal that lives in the sea. The shell is part of the body of the animal. Empty seashells are often found washed up on beaches by beachcombers...
s, and feather
Feather
Feathers are one of the epidermal growths that form the distinctive outer covering, or plumage, on birds and some non-avian theropod dinosaurs. They are considered the most complex integumentary structures found in vertebrates, and indeed a premier example of a complex evolutionary novelty. They...
s are also used.

The usual means used to administer these substances is by preparations called bhasma, Sanskrit
Sanskrit
Sanskrit , is a historical Indo-Aryan language and the primary liturgical language of Hinduism, Jainism and Buddhism.Buddhism: besides Pali, see Buddhist Hybrid Sanskrit Today, it is listed as one of the 22 scheduled languages of India and is an official language of the state of Uttarakhand...
for "ash". Calcination
Calcination
Calcination is a thermal treatment process applied to ores and other solid materials to bring about a thermal decomposition, phase transition, or removal of a volatile fraction. The calcination process normally takes place at temperatures below the melting point of the product materials...
, which is described in the literature of the art as shodhana, "purification", is the process used to prepare these bhasma for administration. Sublimation
Sublimation
Sublimation may refer to:* Sublimation , the change from solid to gas without entering liquid phase* Sublimation , the transformation of emotions* Sublimation , a music album by Canvas Solaris-See also:...
and the preparation of a mercury sulfide
Sulfide
A sulfide is an anion of sulfur in its lowest oxidation state of 2-. Sulfide is also a slightly archaic term for thioethers, a common type of organosulfur compound that are well known for their bad odors.- Properties :...
are also in use in the preparation of its materia medica. A variety of methods are used to achive this. One involves the heating of thin sheets of metal and then immersing them in oil (taila), extract (takra), cow urine (gomutra) and other substances. Others are calcined in crucible
Crucible
A crucible is a container used for metal, glass, and pigment production as well as a number of modern laboratory processes, which can withstand temperatures high enough to melt or otherwise alter its contents...
s heated with fires of cow dung (puttam). Ayurvedic practitioners believe that this process of purification removes undesirable qualities and enhances their therapeutic power.

Modern medicine finds that mercury is inherently toxic
Mercury poisoning
Mercury poisoning is a disease caused by exposure to mercury or its compounds. Mercury is a heavy metal occurring in several forms, all of which can produce toxic effects in high enough doses...
, and that its toxicity is not due to the presence of impurities. While mercury does have anti-microbial properties, and formerly was widely used in Western medicine, its toxicity does not warrant the risk of using it as a health product in most circumstances. The Centers for Disease Control and Prevention
Centers for Disease Control and Prevention
The Centers for Disease Control and Prevention are a United States federal agency under the Department of Health and Human Services headquartered in Druid Hills, unincorporated DeKalb County, Georgia, in Greater Atlanta...
have also reported a number of cases of lead poisoning associated with Ayurvedic medicine. Other incidents of heavy metal poisoning
Heavy Metal Poisoning
Heavy Metal Poisoning is a song by American rock band Styx. It was included as the fifth track on their 1983 studio album Kilroy Was Here.The song in the story of Kilroy Was Here has the character of Dr Righteous preaching the evils of rock and roll...
have been attributed to the use of rasa shastra compounds in the United States, and arsenic
Arsenic
Arsenic is a chemical element with the symbol As, atomic number 33 and relative atomic mass 74.92. Arsenic occurs in many minerals, usually in conjunction with sulfur and metals, and also as a pure elemental crystal. It was first documented by Albertus Magnus in 1250.Arsenic is a metalloid...
has also been found in some of the preparations, which have been marketed in the United States
United States
The United States of America is a federal constitutional republic comprising fifty states and a federal district...
under trade names such as "AyurRelief", "GlucoRite", "Acnenil", "Energize", "Cold Aid", and "Lean Plus".

Ayurvedic practitioners claim that these reports of toxicity are due to failure to follow traditional practices in the mass production of these preparations for sale, but modern science finds that not only mercury, but also lead is inherently toxic
Lead poisoning
Lead poisoning is a medical condition caused by increased levels of the heavy metal lead in the body. Lead interferes with a variety of body processes and is toxic to many organs and tissues including the heart, bones, intestines, kidneys, and reproductive and nervous systems...
. The government of India
Government of India
The Government of India, officially known as the Union Government, and also known as the Central Government, was established by the Constitution of India, and is the governing authority of the union of 28 states and seven union territories, collectively called the Republic of India...
has ordered that Ayurvedic products must specify their metallic content directly on the labels of the product; however, M. S. Valiathan noted that "the absence of post-market surveillance and the paucity of test laboratory facilities [in India] make the quality control of Ayurvedic medicines exceedingly difficult at this time.
The source of this article is wikipedia, the free encyclopedia.  The text of this article is licensed under the GFDL.