Encyclopedia
The RSHA, or Reichssicherheitshauptamt (Reich Main Security Office or Reich Security Main Office or Reich Security Head Office) was an organization subordinate to Heinrich Himmler
Heinrich Himmler
Heinrich Luitpold Himmler was Reichsführer of the SS, a military commander, and a leading member of the Nazi Party. As Chief of the German Police and the Minister of the Interior from 1943, Himmler oversaw all internal and external police and security forces, including the Gestapo...
in his dual capacities as Chef der Deutschen Polizei (Chief of German Police) and Reichsführer-SS
Reichsführer-SS
was a special SS rank that existed between the years of 1925 and 1945. Reichsführer-SS was a title from 1925 to 1933 and, after 1934, the highest rank of the German Schutzstaffel .-Definition:...
. The organization's stated duty was to fight all "enemies of the Reich" inside and outside the borders of Nazi Germany
Nazi Germany
Nazi Germany , also known as the Third Reich , but officially called German Reich from 1933 to 1943 and Greater German Reich from 26 June 1943 onward, is the name commonly used to refer to the state of Germany from 1933 to 1945, when it was a totalitarian dictatorship ruled by...
.

The RSHA was created by Reichsführer-SS
Reichsführer-SS
was a special SS rank that existed between the years of 1925 and 1945. Reichsführer-SS was a title from 1925 to 1933 and, after 1934, the highest rank of the German Schutzstaffel .-Definition:...
Himmler
Heinrich Himmler
Heinrich Luitpold Himmler was Reichsführer of the SS, a military commander, and a leading member of the Nazi Party. As Chief of the German Police and the Minister of the Interior from 1943, Himmler oversaw all internal and external police and security forces, including the Gestapo...
on 27 September 1939 through the merger of the SS intelligence service the Sicherheitsdienst
Sicherheitsdienst
Sicherheitsdienst , full title Sicherheitsdienst des Reichsführers-SS, or SD, was the intelligence agency of the SS and the Nazi Party in Nazi Germany. The organization was the first Nazi Party intelligence organization to be established and was often considered a "sister organization" with the...
(SD) or Security Service, and the Sicherheitspolizei
Sicherheitspolizei
The Sicherheitspolizei , often abbreviated as SiPo, was a term used in Nazi Germany to describe the state political and criminal investigation security agencies. It was made up by the combined forces of the Gestapo and the Kripo between 1936 and 1939...
(SiPo) or Security Police which were nominally under the Interior Ministry. The SiPo was composed of the Geheime Staatspolizei
Gestapo
The Gestapo was the official secret police of Nazi Germany. Beginning on 20 April 1934, it was under the administration of the SS leader Heinrich Himmler in his position as Chief of German Police...
(Gestapo, Secret State Police) and the Kriminalpolizei (Kripo, Criminal Police).

The first chief of the RSHA was SS-Obergruppenführer
Obergruppenführer
Obergruppenführer was a Nazi Party paramilitary rank that was first created in 1932 as a rank of the SA and until 1942 it was the highest SS rank inferior only to Reichsführer-SS...
and General of Police Reinhard Heydrich
Reinhard Heydrich
Reinhard Tristan Eugen Heydrich , also known as The Hangman, was a high-ranking German Nazi official.He was SS-Obergruppenführer and General der Polizei, chief of the Reich Main Security Office and Stellvertretender Reichsprotektor of Bohemia and Moravia...
until he was assassinated in 1942 (following a British-backed Czech operation
Operation Anthropoid
Operation Anthropoid was the code name for the targeted killing of top German SS leader Reinhard Heydrich. He was the chief of the Reich Main Security Office , the acting Protector of Bohemia and Moravia, and a chief planner of the Final Solution, the Nazi German programme for the genocide of the...
). Following Heydrich's assassination, Himmler personally took over as acting chief of the RSHA, but in January 1943 delegated the office to SS-Obergruppenführer and General of Police Dr. Ernst Kaltenbrunner
Ernst Kaltenbrunner
Ernst Kaltenbrunner was an Austrian-born senior official of Nazi Germany during World War II. Between January 1943 and May 1945, he held the offices of Chief of the Reichssicherheitshauptamt , President of Interpol and, as a Obergruppenführer und General der Polizei und Waffen-SS, he was the...
, who served as the head of the RSHA for the remainder of World War II
World War II
World War II, or the Second World War , was a global conflict lasting from 1939 to 1945, involving most of the world's nations—including all of the great powers—eventually forming two opposing military alliances: the Allies and the Axis...
. The RSHA acronym for its director was 'CSSD': Chef der Sicherheitspolizei und des SD (Chief of the Security Police and of the Security Service).

The organization controlled the security service apparatus for the Reich and the Nazi Party. Its activities included intelligence-gathering, criminal investigation, overseeing foreigners, monitoring public opinion and Nazi indoctrination. Its stated duty was to find and eliminate the "enemies" of the Third Reich. However, included within the list of "enemies" were Jews, Romani people, the "racially undesirable" as well as Communists
Communism
Communism is a social, political and economic ideology that aims at the establishment of a classless, moneyless, revolutionary and stateless socialist society structured upon common ownership of the means of production...
, Freemasons
Freemasonry
Freemasonry is a fraternal organisation that arose from obscure origins in the late 16th to early 17th century. Freemasonry now exists in various forms all over the world, with a membership estimated at around six million, including approximately 150,000 under the jurisdictions of the Grand Lodge...
, pacifists and Christian
Christian
A Christian is a person who adheres to Christianity, an Abrahamic, monotheistic religion based on the life and teachings of Jesus of Nazareth as recorded in the Canonical gospels and the letters of the New Testament...
activists.

The RSHA also oversaw the Einsatzgruppen
Einsatzgruppen
Einsatzgruppen were SS paramilitary death squads that were responsible for mass killings, typically by shooting, of Jews in particular, but also significant numbers of other population groups and political categories...
death squad
Death squad
A death squad is an armed military, police, insurgent, or terrorist squad that conducts extrajudicial killings, assassinations, and forced disappearances of persons as part of a war, insurgency or terror campaign...
s that followed the invasion forces of the Wehrmacht Heer (German Army) into Eastern Europe. In its role as the nation's and NSDAP's security service, the RSHA coordinated activities among a number of different agencies that had wide-ranging responsibilities within Third Reich.

The RSHA was oftentimes abbreviated when part of correspondence as "RSi-H" so there would be no confusion with the SS department of RuSHA or SS-Rasse- und Siedlungshauptamt (SS Race and Settlement Office).

The organization at its simplest was divided into seven offices :


Amt IV, the Gestapo, and Amt V, the Kripo, together constituted the Sicherheitspolizei
Sicherheitspolizei
The Sicherheitspolizei , often abbreviated as SiPo, was a term used in Nazi Germany to describe the state political and criminal investigation security agencies. It was made up by the combined forces of the Gestapo and the Kripo between 1936 and 1939...
(Security Police) or SiPo. It was the SiPo that did most of the work in rounding up Jews, Romani People and other people deemed to be enemies of the Reich and deporting them to the concentration and extermination camps in German Occupied Poland and Ukraine.

During the earlier part of the fighting in the Soviet Union, the RSHA also had operational control of certain Waffen-SS
Waffen-SS
The Waffen-SS was a multi-ethnic and multi-national military force of the Third Reich. It constituted the armed wing of the Schutzstaffel or SS, an organ of the Nazi Party. The Waffen-SS saw action throughout World War II and grew from three regiments to over 38 divisions, and served alongside...
units which Himmler had withheld from the Army High Command (OKH); these units, the 1st and 2nd SS Infantry Brigades and the SS Cavalry Brigade
SS Cavalry Brigade
The SS Cavalry Brigade was a unit of the Waffen SS formed in 1940, from cavalry regiments created for occupation duties in German-occupied Poland. Later, while serving in German-occupied areas of the Soviet Union, the brigade was involved in the genocide of the Jewish population and anti-partisan...
, were formed from former Standarten of the Totenkopfverbände or concentration camp service. Their role was not to serve in combat, except in emergencies, but to carry out "police and security operations" in occupied territories like the Einsatzgruppen. 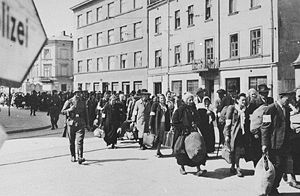