Encyclopedia
Quinuclidones are a class of bicyclic organic compound
Organic compound
An organic compound is any member of a large class of gaseous, liquid, or solid chemical compounds whose molecules contain carbon. For historical reasons discussed below, a few types of carbon-containing compounds such as carbides, carbonates, simple oxides of carbon, and cyanides, as well as the...
s with chemical formula
Chemical formula
A chemical formula or molecular formula is a way of expressing information about the atoms that constitute a particular chemical compound....
C7H11NO with two structural isomers for the base skeleton 3-quinuclidone and 2-quinuclidone.
3-Quinuclidone (1-azabicyclo[2.2.2]octan-3-one) is an uneventful molecule that can be synthesized as the hydrochloric acid
Hydrochloric acid
Hydrochloric acid is a solution of hydrogen chloride in water, that is a highly corrosive, strong mineral acid with many industrial uses. It is found naturally in gastric acid....
salt
Salt
In chemistry, salts are ionic compounds that result from the neutralization reaction of an acid and a base. They are composed of cations and anions so that the product is electrically neutral...
in a Dieckman condensation:
Organic reduction of this compound gives the compound quinuclidine
Quinuclidine
Quinuclidine is an organic compound and a bicyclic amine and used as a catalyst and a chemical building block. It is a strong base with pKa of the conjugate acid of 11.0. This is due to greater availability of the nitrogen lone pair...
, structurally related to DABCO
DABCO
DABCO or 1,4-diazabicyclo[2.2.2]octane is a chemical compound. It is a polyurethane and Baylis-Hillman reaction catalyst, complexing ligand and Lewis base. It is used to regulate the reaction rate in Flexplay time-limited DVDs by adjusting pH. Antioxidants, like DABCO, are used to improve the...
which has one additional bridgehead nitrogen atom.

The organic synthesis
Organic synthesis
Organic synthesis is a special branch of chemical synthesis and is concerned with the construction of organic compounds via organic reactions. Organic molecules can often contain a higher level of complexity compared to purely inorganic compounds, so the synthesis of organic compounds has...
of the tetrafluoroborate
Tetrafluoroborate
Tetrafluoroborate is the anion BF4−. This tetrahedral species is isoelectronic with tetrafluoromethane, CF4 and tetrafluoroammonium NF4+, and is valence isoelectronic with many stable and important species including the closely related anion perchlorate, ClO4−...
salt
Salt
In chemistry, salts are ionic compounds that result from the neutralization reaction of an acid and a base. They are composed of cations and anions so that the product is electrically neutral...
of 2-quinuclidone is a six-step affair starting from norcamphor the final step being an azide
Azide
Azide is the anion with the formula N3−. It is the conjugate base of hydrazoic acid. N3− is a linear anion that is isoelectronic with CO2 and N2O. Per valence bond theory, azide can be described by several resonance structures, an important one being N−=N+=N−...
- ketone
Ketone
In organic chemistry, a ketone is an organic compound with the structure RCR', where R and R' can be a variety of atoms and groups of atoms. It features a carbonyl group bonded to two other carbon atoms. Many ketones are known and many are of great importance in industry and in biology...
Schmidt reaction
Schmidt reaction
The Schmidt reaction is an organic reaction involving alkyl migration over the carbon-nitrogen chemical bond in an azide with expulsion of nitrogen...
(38% yield): 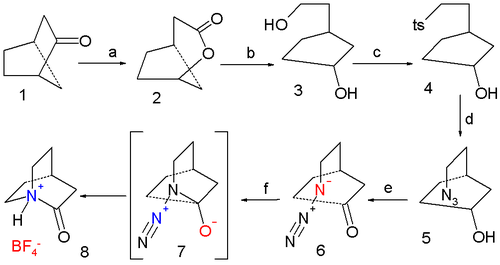 This compound rapidly reacts with water to the corresponding amino acid
Amino acid
Amino acids are molecules containing an amine group, a carboxylic acid group and a side-chain that varies between different amino acids. The key elements of an amino acid are carbon, hydrogen, oxygen, and nitrogen...
with a chemical half-life of 15 seconds. X-ray diffraction shows pyramidalization on the nitrogen atom (59° compared to 0 for reference dimethylformamide
Dimethylformamide
Dimethylformamide is an organic compound with the formula 2NCH. Commonly abbreviated as DMF , this colourless liquid is miscible with water and the majority of organic liquids. DMF is a common solvent for chemical reactions...
) and torsion around the carbon-nitrogen bond
Carbon-nitrogen bond
A carbon–nitrogen bond is a covalent bond between carbon and nitrogen and is one of the most abundant bonds in organic chemistry and biochemistry....
to an extent of 91°. Attempts to prepare the free base lead to uncontrolled polymerization
Polymerization
In polymer chemistry, polymerization is a process of reacting monomer molecules together in a chemical reaction to form three-dimensional networks or polymer chains...
.

It is nevertheless possible to estimate its basicity in an experiment in which amine pairs (the quinuclidonium salt and a reference amine such as diethylamine
Diethylamine
Diethylamine is a secondary amine with the molecular structure CH3CH2NHCH2CH3. It is a flammable, strongly alkaline liquid. It is miscible with water and ethanol. It is a colorless liquid which often appears brown due to impurities...
or indoline
Indoline
Indoline is an aromatic heterocyclic organic compound. It has a bicyclic structure, consisting of a six-membered benzene ring fused to a five-membered nitrogen-containing ring. The compound is based on the indole structure, but the 2-3 bond is saturated. by oxidation/dehydrogenation it can be...
) are introduced into a mass spectrometer. The relative basicity is then revealed by collision induced dissociation of the heterodimer. Further analysis via the extended kinetic method allows for the determination of the proton affinity and gas phase basicity of 2-quinuclidonium. This method has determined that quinuclidone ranks among secondary and tertiary amines in terms of proton affinity. This high basicity is hypothesized to be due to the loss of electron delocalization when the amide bond is twisted--this causes misalignment of the pi orbitals, resulting in loss of electron resonance.