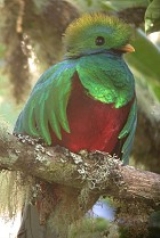 Encyclopedia
Quetzals are strikingly colored bird
Bird
Birds are feathered, winged, bipedal, endothermic , egg-laying, vertebrate animals. Around 10,000 living species and 188 families makes them the most speciose class of tetrapod vertebrates. They inhabit ecosystems across the globe, from the Arctic to the Antarctic. Extant birds range in size from...
s in the trogon
Trogon
The trogons and quetzals are birds in the order Trogoniformes which contains only one family, the Trogonidae. The family contains 39 species in eight genera. The fossil record of the trogons dates back 49 million years to the mid-Eocene. They might constitute a member of the basal radiation of...
family (Trogonidae). They are found in forests and woodlands, especially in humid highlands, with the five species from the genus Pharomachrus being exclusively Neotropical, while the single Euptilotis
Eared Quetzal
The Eared Quetzal , also known as the Eared Trogon, is a near passerine bird in the trogon family, Trogonidae. It breeds in streamside pine-oak forests and canyons in the Sierra Madre Occidental of Mexico south to western Michoacán. It is sometimes seen as a vagrant to southeasternmost Arizona in...
species is almost entirely restricted to western Mexico
Mexico
The United Mexican States , commonly known as Mexico , is a federal constitutional republic in North America. It is bordered on the north by the United States; on the south and west by the Pacific Ocean; on the southeast by Guatemala, Belize, and the Caribbean Sea; and on the east by the Gulf of...
. They are fairly large (all over 32 cm or 13 inches), slightly bigger than other trogon species. Quetzals have iridescent green or golden-green wing coverts, back, chest and head, and a red belly. They are strongly sexually dimorphic, and parts of the females' plumage
Plumage
Plumage refers both to the layer of feathers that cover a bird and the pattern, colour, and arrangement of those feathers. The pattern and colours of plumage vary between species and subspecies and can also vary between different age classes, sexes, and season. Within species there can also be a...
is brown or grey. These largely solitary birds feed on fruits, berries, insects and small vertebrate
Vertebrate
Vertebrates are animals that are members of the subphylum Vertebrata . Vertebrates are the largest group of chordates, with currently about 58,000 species described. Vertebrates include the jawless fishes, bony fishes, sharks and rays, amphibians, reptiles, mammals, and birds...
s (e.g. frogs), and can, despite the bright plumage, be surprisingly difficult to see in their wooded habitats.

The name "quetzal" is from Nahuatl
Nahuatl
Nahuatl is thought to mean "a good, clear sound" This language name has several spellings, among them náhuatl , Naoatl, Nauatl, Nahuatl, Nawatl. In a back formation from the name of the language, the ethnic group of Nahuatl speakers are called Nahua...
quetzalli, "large brilliant tail feather" (American Heritage Dictionary) or "tail coverts of the quetzal" (Merriam–Webster's Collegiate Dictionary), from the Nahuatl root
Root (linguistics)
The root word is the primary lexical unit of a word, and of a word family , which carries the most significant aspects of semantic content and cannot be reduced into smaller constituents....
quetz = "stand up" used to refer to an upstanding plume of feathers.

The word "quetzal" was originally used for just the Resplendent Quetzal
Resplendent Quetzal
The Resplendent Quetzal, Pharomachrus mocinno, is a bird in the trogon family. It is found from southern Mexico to western Panama . It is well known for its colorful plumage. There are two subspecies, P. m. mocinno and P. m...
, Pharomachrus mocinno, the famous long-tailed quetzal of Central America
Central America
Central America is the central geographic region of the Americas. It is the southernmost, isthmian portion of the North American continent, which connects with South America on the southeast. When considered part of the unified continental model, it is considered a subcontinent...
, which is the national bird and also the name of the currency
Guatemalan quetzal
The quetzal is the currency of Guatemala. It is named after the national bird of Guatemala, the Resplendent Quetzal. In ancient Mayan culture, the quetzal bird's tail feathers were used as currency. It is divided into 100 cents, called centavos in standard Spanish or lenes in Guatemalan slang...
of Guatemala
Guatemala
Guatemala is a country in Central America bordered by Mexico to the north and west, the Pacific Ocean to the southwest, Belize to the northeast, the Caribbean to the east, and Honduras and El Salvador to the southeast...
. It still often refers to that bird specifically but now also names all the species of the genera Pharomachrus and Euptilotis.