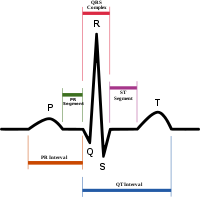 The QRS complex is a name for the combination of three of the graphical deflections seen on a typical electrocardiogram (ECG). It is usually the central and most visually obvious part of the tracing. It corresponds to the depolarization
Depolarization
In biology, depolarization is a change in a cell's membrane potential, making it more positive, or less negative. In neurons and some other cells, a large enough depolarization may result in an action potential...
of the right and left ventricles
Ventricle (heart)
In the heart, a ventricle is one of two large chambers that collect and expel blood received from an atrium towards the peripheral beds within the body and lungs. The Atria primes the Pump...
of the human heart
Human heart
The human heart is a muscular organ that provides a continuous blood circulation through the cardiac cycle and is one of the most vital organs in the human body...
. In adults, it normally lasts 0.06 - 0.10 s; in children and during physical activity, it may be shorter.

Typically an ECG has five deflections, arbitrarily named "P" to "T" waves. The Q, R, and S waves occur in rapid succession, do not all appear in all leads, and reflect a single event, and thus are usually considered together. A Q wave is any downward deflection after the P wave
P wave (electrocardiography)
In electrocardiography, during normal atrial depolarization, the main electrical vector is directed from the SA node towards the AV node, and spreads from the right atrium to the left atrium...
. An R wave follows as an upward deflection, and the S wave is any downward deflection after the R wave. The T wave
T wave
In electrocardiography, the T wave represents the repolarization of the ventricles. The interval from the beginning of the QRS complex to the apex of the T wave is referred to as the absolute refractory period. The last half of the T wave is referred to as the relative refractory period...
follows the S wave, and in some cases an additional U wave
U wave
The U wave is a wave on an electrocardiogram that is not always seen. It is typically small, and, by definition, follows the T wave. U waves are thought to represent repolarization of the papillary muscles or Purkinje fibers.-Interpretation:...
follows the T wave.

The His
Bundle of His
The bundle of His, known as the AV bundle or atrioventricular bundle, is a collection of heart muscle cells specialized for electrical conduction that transmits the electrical impulses from the AV node to the point of the apex of the fascicular branches...
/Purkinje
Purkinje fibers
For the nervous cells, see Purkinje cellPurkinje fibers are located in the inner ventricular walls of the heart, just beneath the endocardium...
specialized muscle cells coordinate the depolarization of both ventricles, and if they are working efficiently the QRS complex is 80 to 120 ms in duration (represented by three small squares or less at the standard paper speed of 25mm/s). Any abnormality of conduction takes longer and causes "widened" QRS complexes. In bundle branch block
Bundle branch block
A bundle branch block refers to a defect of the heart's electrical conduction system.-Anatomy and physiology:The heart's electrical activity begins in the sinoatrial node , which is situated on the upper right atrium. The impulse travels next through the left and right atria and summates at the...
there can be an abnormal second upward deflection within the QRS complex, and in this case the second upward deflection is referred to as R' . This would be described as an RSR' pattern.

Looking at the precordial leads, the r wave usually progresses from showing a rS-type complex in V1 with an increasing R and a decreasing S wave when moving towards the left side. There is usually an qR-type of complex in V5 and V6 with the R-wave amplitude usually taller in V5 than in V6. It is normal to have a narrow QS and rSr' patterns in V1, and so is also the case for qRs and R patterns in V5 and V6. The transition zone is where the QRS complex changes from predominately negative to predominately positive (R/S ratio becoming >1), and this usually occurs at V3 or V4. It is normal to have the transition zone at V2 (called "early transition"), and at V5 (called "delayed transition").

Not every QRS complex contains a Q wave, an R wave, and an S wave. By convention, any combination of these waves can be referred to as a QRS complex. However, correct interpretation of difficult ECGs requires exact labeling of the various waves. Some authors use lowercase and capital letters, depending on the relative size of each wave. For example, an Rs complex would be positively deflected, while an rS complex would be negatively deflected. If both complexes were labeled RS, it would be impossible to appreciate this distinction without viewing the actual ECG.
The source of this article is wikipedia, the free encyclopedia.  The text of this article is licensed under the GFDL.