Encyclopedia
Ventricular tachycardia (V-tach or VT) is a tachycardia
Tachycardia
Tachycardia comes from the Greek words tachys and kardia . Tachycardia typically refers to a heart rate that exceeds the normal range for a resting heart rate...
, or fast heart rhythm, that originates in one of the ventricles
Left ventricle
The left ventricle is one of four chambers in the human heart. It receives oxygenated blood from the left atrium via the mitral valve, and pumps it into the aorta via the aortic valve.-Shape:...
of the heart
Heart
The heart is a myogenic muscular organ found in all animals with a circulatory system , that is responsible for pumping blood throughout the blood vessels by repeated, rhythmic contractions...
. This is a potentially life-threatening arrhythmia because it may lead to ventricular fibrillation
Ventricular fibrillation
Ventricular fibrillation is a condition in which there is uncoordinated contraction of the cardiac muscle of the ventricles in the heart, making them quiver rather than contract properly. Ventricular fibrillation is a medical emergency and most commonly identified arrythmia in cardiac arrest...
, asystole
Asystole
In medicine, asystole is a state of no cardiac electrical activity, hence no contractions of the myocardium and no cardiac output or blood flow...
, and sudden death
Sudden Cardiac Death
Sudden cardiac death is natural death from cardiac causes, heralded by abrupt loss of consciousness within one hour of the onset of acute symptoms. Other forms of sudden death may be noncardiac in origin...
. 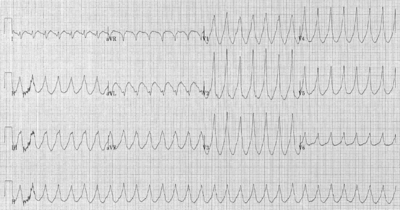 Ventricular tachycardia can be classified based on its morphology:

A third way to classify ventricular tachycardia is on the basis of its symptoms: Pulseless VT is associated with no effective cardiac output, hence, no effective pulse, and is a cause of cardiac arrest. In this circumstance, it is best treated the same way as ventricular fibrillation (VF), and is recognized as one of the shockable rhythms on the cardiac arrest protocol. Some VT is associated with reasonable cardiac output and may even be asymptomatic. The heart usually tolerates this rhythm poorly in the medium to long term, and patients may certainly deteriorate to pulseless VT or to VF.

The morphology of the tachycardia depends on its cause.

Polymorphic ventricular tachycardia, on the other hand, is most commonly caused by abnormalities of ventricular muscle repolarization. The predisposition to this problem usually manifests on the ECG as a prolongation of the QT interval. QT prolongation may be congenital or acquired. Congenital problems include Long QT syndrome
Long QT syndrome
The long QT syndrome is a rare inborn heart condition in which delayed repolarization of the heart following a heartbeat increases the risk of episodes of torsade de pointes . These episodes may lead to palpitations, fainting and sudden death due to ventricular fibrillation...
and Catecholaminergic polymorphic ventricular tachycardia
Catecholaminergic polymorphic ventricular tachycardia
Catecholaminergic Polymorphic Ventricular Tachycardia is an electrophysiological disorder of the heart that occurs in genetically predisposed individuals...
. Acquired problems are usually related to drug toxicity or electrolyte abnormalities, but can occur as a result of myocardial ischemia. Class III anti-arrhythmic drugs such as sotalol
Sotalol
Sotalol is a drug used in individuals with rhythm disturbances of the heart, and to treat hypertension in some individuals. It is a non-selective competitive β-adrenergic receptor blocker that also exhibits Class III antiarrhythmic properties by its inhibition of potassium channels...
and amiodarone
Amiodarone
Amiodarone is an antiarrhythmic agent used for various types of tachyarrhythmias , both ventricular and supraventricular arrhythmias. Discovered in 1961, it was not approved for use in the United States until 1985...
prolong the QT interval and may in some circumstances be pro-arrhythmic. Other relatively common drugs including some antibiotics and antihistamines may also be a danger, particularly in combination with one another. Problems with blood levels of potassium, magnesium and calcium may also contribute. High dose magnesium is often used as an antidote in cardiac arrest protocols.

Therapy may be directed at either terminating an episode of the arrhythmia or for suppressing a future episode from occurring. The treatment for stable VT is tailored to the specific patient, with regard to how well the individual tolerates episodes of ventricular tachycardia, how frequently episodes occur, their comorbidities, and their wishes. Patients suffering from pulseless VT or unstable VT are hemodynamically compromised and require immediate cardioversion.

A patient with pulseless VT or a ventricular fibrillation
Ventricular fibrillation
Ventricular fibrillation is a condition in which there is uncoordinated contraction of the cardiac muscle of the ventricles in the heart, making them quiver rather than contract properly. Ventricular fibrillation is a medical emergency and most commonly identified arrythmia in cardiac arrest...
will be unconscious and treated as an emergency on an ACLS
Advanced cardiac life support
Advanced cardiac life support or Advanced Cardiovascular Life Support refers to a set of clinical interventions for the urgent treatment of cardiac arrest and other life threatening medical emergencies, as well as the knowledge and skills to deploy those interventions.Extensive medical knowledge...
protocol, given high energy (360J with a monophasic defibrillator, or 200J with a biphasic defibrillator) unsynchronised cardioversion (defibrillation).

An ICD may also be set to attempt to overdrive pace the ventricle. Pacing the ventricle at a rate faster than the underlying tachycardia can sometimes be effective in terminating the rhythm. If this fails after a short trial, the ICD will usually stop pacing, charge up and deliver a defibrillation grade shock.

Catheter ablation is a key therapeutic modality for patients with recurrent VT. A task force consisting of the European Heart Rhythm Association (EHRA) in conjunction with the Heart Rhythm Society (HRS) developed an expert consensus paper that carefully defines the indications, techniques, and outcomes of this procedure.

There was consensus among the task force members that catheter ablation for VT should generally be considered early in the treatment of patients with recurrent VT. In the past, ablation was often not considered until pharmacological options had been exhausted, often after the patient had suffered substantial morbidity from recurrent episodes of VT and ICD shocks. Antiarrhythmic medications can reduce the frequency of ICD therapies, but have disappointing efficacy and side effects. Advances in technology and understanding of VT substrates now allow ablation of multiple and unstable VTs with acceptable safety and efficacy, even in patients with advanced heart disease.

Remote magnetic navigation
Remote magnetic navigation
-Remote Magnetic Navigation:Remote Magnetic Navigation, employed by companies such as Stereotaxis , is an emerging technology in interventional cardiology. Catheters with magnetic tips can be steered within the patient, without the need for an electrophysiologist to maneuver the catheter or...
is recognized as an important method for delivery of ablation therapy for these patients due to the ability of the flexible magnetic catheter to carefully map the diseased tissue without inadvertently inducing abnormal ventricular rhythms. In a series of 110 patients that included all morphologies of VT, 85% of patients treated with magnetic ablation were free from VT at one year after the intervention and were exposed to statistically reduced levels of radiation when compared to non-magnetic VT ablations at the same center. In patients with myocardial scarring from a previous heart attack who were receiving excessive shocks from an ICD, magnetic ablation was shown to be successful in reducing these shocks and demonstrated a 67% reduction in imaging radiation needed to complete the procedure compared to a historical non-magnetic group. For monomorphic idiopathic VT which may originate in thin-walled tissues, magnetic ablation offers catheter flexibility, steering accuracy and reproducibility to navigate to a desired location with a low probability of perforating the myocardium.

Drugs such as amiodarone
Amiodarone
Amiodarone is an antiarrhythmic agent used for various types of tachyarrhythmias , both ventricular and supraventricular arrhythmias. Discovered in 1961, it was not approved for use in the United States until 1985...
or procainamide
Procainamide
Procainamide INN is a pharmaceutical antiarrhythmic agent used for the medical treatment of cardiac arrhythmias, classified by the Vaughan Williams classification system as class Ia.-History:...
may be used in addition to defibrillation
Defibrillation
Defibrillation is a common treatment for life-threatening cardiac arrhythmias, ventricular fibrillation and pulseless ventricular tachycardia. Defibrillation consists of delivering a therapeutic dose of electrical energy to the affected heart with a device called a defibrillator...
to terminate VT while the underlying cause of the VT can be determined. As hypomagnesia is a common cause of VT, stat dose magnesium sulphate can be given for torsades or if hypomagnesemia is found/suspected.

The implantation of an ICD is more effective than drug therapy for prevention of sudden cardiac death due to VT and VF, but may be constrained by cost issues,(RDM) and well as patient co-morbidities and patient preference.

In the 2006 film Casino Royale
Casino Royale (2006 film)
Casino Royale is the twenty-first film in the James Bond film series and the first to star Daniel Craig as fictional MI6 agent James Bond...
, the protagonist, James Bond
James Bond
James Bond, code name 007, is a fictional character created in 1953 by writer Ian Fleming, who featured him in twelve novels and two short story collections. There have been a six other authors who wrote authorised Bond novels or novelizations after Fleming's death in 1964: Kingsley Amis,...
, suffers ventricular tachycardia from intoxication of digitalis
Digitalis
Digitalis is a genus of about 20 species of herbaceous perennials, shrubs, and biennials that are commonly called foxgloves. This genus was traditionally placed in the figwort family Scrophulariaceae, but recent reviews of phylogenetic research have placed it in the much enlarged family...
and goes into cardiac arrest.

"V-Tach" is what "The Satin Slayer
Alexander Cambias, Sr.
Alexander Cambias, Sr. is a fictional character from the ABC daytime drama All My Children, as portrayed by Ronald Guttman, from July 23, 2003 until August 2003. Guttman returned to the role on February 23, 2007 and left April 27, 2007...
" from the American soap opera All My Children
All My Children
All My Children is an American television soap opera that aired on ABC from January 5, 1970 to September 23, 2011. Created by Agnes Nixon, All My Children is set in Pine Valley, Pennsylvania, a fictitious suburb of Philadelphia. The show features Susan Lucci as Erica Kane, one of daytime's most...
used to kill his victims.
The source of this article is wikipedia, the free encyclopedia.  The text of this article is licensed under the GFDL.