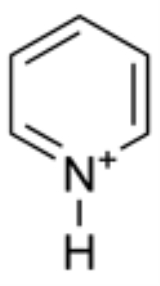 Pyridine was discovered in 1849 by the Scottish chemist Thomas Anderson
Thomas Anderson (chemist)
thumb|280pxThomas Anderson was a noted 19th century chemist. In 1853 his work on alkaloids led him to discover the correct structure for codeine...
as one of the constituents of bone oil
Dippel's oil
Dippel's Oil is a nitrogenous by-product of the destructive distillation manufacture of bone char . This liquid is dark colored and highly viscous with an unpleasant smell. The oil contains the organic base pyrrole. It is named after its inventor, Johann Conrad Dippel,Dippel's oil had a number...
. Two years later, Anderson isolated pure pyridine through fractional distillation
Fractional distillation
Fractional distillation is the separation of a mixture into its component parts, or fractions, such as in separating chemical compounds by their boiling point by heating them to a temperature at which several fractions of the compound will evaporate. It is a special type of distillation...
of the oil.

Hello all, does any one have a complete synthesis for making pyridine in a home reserch lab? it cant be bought in my state due to scum bags using it f...

The project of Pyridine and its derivatives with an Annual Output of 20000 Ton. Contact us HEBEI JIHENG GROUP CO., LTD. Contact Name: Jiao meng T...

How to manufacture pyridine industrially?
More