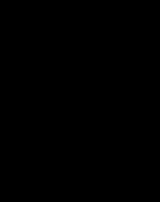 Although heterocyclic compound
Compound
Compound may refer to:* Chemical compounds, combinations of two or more elements* Compound , a cluster of buildings having a shared purpose, usually inside a fence or wall...
s may be inorganic
Inorganic compound
Inorganic compounds have traditionally been considered to be of inanimate, non-biological origin. In contrast, organic compounds have an explicit biological origin. However, over the past century, the classification of inorganic vs organic compounds has become less important to scientists,...
, most contain at least one carbon
Carbon
Carbon is the chemical element with symbol C and atomic number 6. As a member of group 14 on the periodic table, it is nonmetallic and tetravalent—making four electrons available to form covalent chemical bonds...
atom, and one or more atoms of elements other than carbon within the ring structure, such as sulfur
Sulfur
Sulfur or sulphur is the chemical element with atomic number 16. In the periodic table it is represented by the symbol S. It is an abundant, multivalent non-metal. Under normal conditions, sulfur atoms form cyclic octatomic molecules with chemical formula S8. Elemental sulfur is a bright yellow...
, oxygen
Oxygen
Oxygen is the element with atomic number 8 and represented by the symbol O. Its name derives from the Greek roots ὀξύς and -γενής , because at the time of naming, it was mistakenly thought that all acids required oxygen in their composition...
or nitrogen
Nitrogen
Nitrogen is a chemical element that has the symbol N, atomic number of 7 and atomic mass 14.00674 u. Elemental nitrogen is a colorless, odorless, tasteless, and mostly inert diatomic gas at standard conditions, constituting 78.08% by volume of Earth's atmosphere...
.
Since in organic chemistry
Organic chemistry
Organic chemistry is a subdiscipline within chemistry involving the scientific study of the structure, properties, composition, reactions, and preparation of carbon-based compounds, hydrocarbons, and their derivatives...
non-carbons usually are considered to replace carbon atoms, they are called heteroatom
Heteroatom
In organic chemistry, a heteroatom is any atom that is not carbon or hydrogen. Usually, the term is used to indicate that non-carbon atoms have replaced carbon in the backbone of the molecular structure...
s, meaning 'different from carbon and hydrogen' (rings of heteroatoms of the same element are homocyclic).