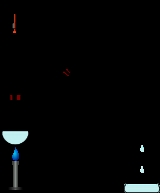 Overview
Fractional distillation is the separation of a mixture
Mixture
In chemistry, a mixture is a material system made up by two or more different substances which are mixed together but are not combined chemically...
into its component parts, or fractions, such as in separating chemical compound
Chemical compound
A chemical compound is a pure chemical substance consisting of two or more different chemical elements that can be separated into simpler substances by chemical reactions. Chemical compounds have a unique and defined chemical structure; they consist of a fixed ratio of atoms that are held together...
s by their boiling point
Boiling point
The boiling point of an element or a substance is the temperature at which the vapor pressure of the liquid equals the environmental pressure surrounding the liquid....
by heating them to a temperature
Temperature
Temperature is a physical property of matter that quantitatively expresses the common notions of hot and cold. Objects of low temperature are cold, while various degrees of higher temperatures are referred to as warm or hot...
at which several fractions of the compound will evaporate. It is a special type of distillation
Distillation
Distillation is a method of separating mixtures based on differences in volatilities of components in a boiling liquid mixture. Distillation is a unit operation, or a physical separation process, and not a chemical reaction....
. Generally the component parts boil at less than 25 °C from each other under a pressure of one atmosphere
Atmosphere
An atmosphere is a layer of gases that may surround a material body of sufficient mass, and that is held in place by the gravity of the body. An atmosphere may be retained for a longer duration, if the gravity is high and the atmosphere's temperature is low...
(atm
Atmosphere (unit)
The standard atmosphere is an international reference pressure defined as 101325 Pa and formerly used as unit of pressure. For practical purposes it has been replaced by the bar which is 105 Pa...
). If the difference in boiling points
Boiling Points
Boiling Points is a prank reality television show, much like the format used on Candid Camera. It is broadcast on MTV in the United States. In each half-hour episode, annoying situations are set up and deliberately inflicted on one or more young adults who are unaware that they are being tested...
is greater than 25 °C, a simple distillation is used.
Fractional distillation in a laboratory makes use of common laboratory glassware and apparatuses, typically including a Bunsen burner
Bunsen burner
A Bunsen burner, named after Robert Bunsen, is a common piece of laboratory equipment that produces a single open gas flame, which is used for heating, sterilization, and combustion.- Operation:...
, a round-bottomed flask and a condenser
Condenser (heat transfer)
In systems involving heat transfer, a condenser is a device or unit used to condense a substance from its gaseous to its liquid state, typically by cooling it. In so doing, the latent heat is given up by the substance, and will transfer to the condenser coolant...
, as well as the single-purpose fractionating column
Fractionating column
A fractionating column or fractionation column is an essential item used in the distillation of liquid mixtures so as to separate the mixture into its component parts, or fractions, based on the differences in their volatilities...
.

What is fractional distillation of liquid air?

In fractional distillation why water goes upwars and not downwards?

Why a fraction distillation is more efficient than simple distillation for separating 2 closely boiling point liquid?

What is the puropose of an outlet in the conical flask?
More